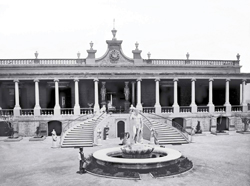 Built as a grand romantic folly in the second half of the nineteenth century, the Dragonara Palace is one of Malta’s most extraordinary and imposing properties. This impressive palace, built by the Maltese banker and merchant Marquis Emmanuele Scicluna as his summer residence in 1870, has been the seat of the Dragonara Casino since July 15th 1964 – 50 years ago.

Over the years the Palace has retained much of its original grandiosity, even though its gardens and grounds have been redeveloped to suit the tourist industry. The Palace provides an impressive visual landmark, situated in a strategic location. With more than 1.5 million tourists visiting Malta each year, the Dragonara Casino is a great entertainment venue for both the avid player as well as for leisure players visiting the island of Malta.

We caught up with Mr. Johann Schembri, Managing Director of Malta’s foremost Casino on the eve of the 50th Anniversary of the Dragonara Casino.

Q: Your company took over the management of the Dragonara Casino in June 2010. What are your thoughts about your four years at the helm of the Casino?
A: Operating the Dragonara Casino bestows a great sense of pride and responsibility. The Casino situated within one of the most prestigious properties in Malta contributes in no small measure to Malta’s economy. When we took over the Casino we had a very specific plan to execute within the context of ‘Preserving the Past and investing in the Future.’  Four years ago, when we took over the Casino, it was not in a good shape. Since then, we invested more than €15 million to ensure that the Casino regains the prominence that it truly deserves, not only as the leading Casino in Malta but as one of the best Casinos in the Southern Mediterranean.
We are proud that as the first fully-owned Maltese company at the helm of Malta’s foremost Casino we managed to turn around the Casino in a short span of time. This is reflected across the most important key performance indicators for our Casino, including growth in market share by patron value as well as the number of visitations to the Casino year on year. Nearly 400,000 patrons entered into our Casino in 2013 and this year we are experiencing even better results.

Q: How would you best describe your achievements obtained over the past four years?
A: Since taking over the Dragonara Casino, the company has been driven to improve the experience of our patrons. We have completed the first investment plan that was required to undertake a substantial improvement to the product. We invested in new gaming systems and content and have ensured that our processes are managed by the best human talent in the market. Our Casino now offers 300 slot machines and a wide range of live table games. We have restored the Palace itself and some parts of the surrounding areas and continue to invest to bring back the Palace to its original splendour.

Q: You have indicated that the Dragonara Casino has grand plans for the future with a multi-million Euro project in the years to come. Can you elaborate on this?
A: The future for the Dragonara Casino is very bright. The plan is to restore the property including the surrounding fortifications, entrance and the building at the North tip of the Peninsula. The latter involves the redevelopment of a large building originally known as ‘Dragonara Point’.
We are finalizing our plans to house an extension of our casino, a purposely designed venue for International Poker tournaments and an up-market gaming venue for international high-rollers inclusive of deluxe suites. The project will be complemented by a unique entertainment concept featuring a private beach and night club to be operated by one of the leading entertainment brands in the world. Once completed, the project will position the Dragonara Complex as one of the most sought after venues for entertainment in Southern Europe. This will mark our contribution to Malta’s status as the European Capital of Culture 2018.
We are positive that the Casino will continue to attract patrons from all over the world and an expanded demographic at that, as we provide a more diversified product over the coming years. The Casino is very popular with the local population but we also attract thousands of patrons from the nearby market of Italy and fast growing markets including Turkey, Israel, Russia and Scandinavia.

Q: How do you see the casino developing over the next few years?
A: Saying that what we have achieved thus far is just the tip of the iceberg may sound very assertive but it’s not far from reality. Some months ago we also launched our online portal providing the online player with a trusted brand and a strong online offering. This project has provided a new dimension to our company and has helped us with sustaining our quality product. Patrons can now avail of interesting cross marketing opportunities, whether they visit us at our property or from the comfort of their own home.
We are very proud to be operating the Casino as we celebrate the milestone of 50 years from its inauguration. We continue to be driven by a strong motivation to create a unique environment for patrons and look forward to another 50 years of excellence.

Point of Consumption Tax: The good, the bad and the other
Gambling zones to appear in Sochi and Crimea