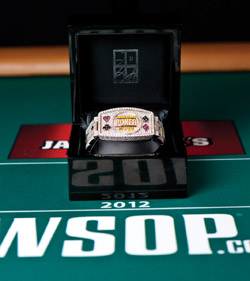 With over five dozen major poker tournaments, constant cash games, tens of thousands of players, and a massive staff to prepare, producing the World Series of Poker is a task. But the WSOP staff and personnel at the Rio Hotel and Casino make it look easy, and the success and growth of the tournament series shows that hard work continues to pay off.

Things were no different this summer, and big names making big finishes capped a record-setting World Series. From Phil Hellmuth’s 12th bracelet, Phil Ivey making five straight final tables, and Michael “The Grinder” Mizrachi becoming the $50,000 Players Championship’s first two-time winner, the 2012 WSOP was definitely something to remember. The big events included the $1 million buy-in Big One for One Drop that featured an $18.3 million payday for poker pro Antonio Esfandiari.

Despite the economic downturn, the event’s prize pool topped $200 million for the first time with a total of 74,766 entries in 61 events. The total prize pool – $222 million – was an increase of 15.6 percent over the previous record of 2011’s $192 million. In the 43-year history of the WSOP, the tournament has now awarded more than $1.6 billion in prize money.

“We’re still in poker’s golden age, at least when WSOP gold bracelets are on the line,” said WSOP Executive Director Ty Stewart.  “We can’t thank the players enough for their continued support of the WSOP and for once again putting a bad beat on market conditions.”

Planning and preparation
As the biggest and most successful poker tournament series in the world, WSOP officials were not interested in giving away trade secrets about what goes in to producing the annual event. However, they did offer Casino International some insight into their work throughout the year. Caesars Vice President of Corporate Communications Seth Palansky plays a major role each year in coordinating the WSOP’s communication efforts and contacts with media.

“The World Series of Poker tournament in Las Vegas requires a team of folks to focus on the event year-round,” Palansky says “Obviously, there is more to do during the event and as it approaches, but what really makes the event achieve its goals each year, is the work that is being put in now and in the coming months to set the event up to be in the best position to succeed. There’s a lot of work that goes into the dates, the space allotment for the infrastructure, the schedule, the events to add, the events to remove, and the timing of events during each 24-hour cycle.”
Before players even take their seats at the tables, major planning has been underway for months regarding the tournament structures, payouts, surveillance, the dealers (and their recruitment), cashiers, chips, cards, tables, felts, chairs, and much more. Every consideration is taken into account to make sure that the month-and-a-half long poker spectacle runs as smoothly as possible.

“There are literally thousands of different moving parts that require a team to be constantly communicating and connecting with one another on a regular basis to ensure no detail has been overlooked and everything needed has been accounted for,” Palansky says.

Player input
A major part of the WSOP’s planning focuses on players and making it the best experience possible. That includes making use of player input to make the series better each year.

“It’s very simple. The players provide the best point of view on what needs fine-tuning each year, and they are very helpful in providing suggestions, guidance and impactful changes,” Palansky says. “We always have players weigh in on things like structures, payouts, starting chip stacks, length of play each day, number and length of breaks, etc. So sometimes we are soliciting feedback, other times we are getting feedback through phone calls, emails, in-person meetings, Tweets, letters and real-event experiences.”

Palansky says that the WSOP staff can make use of player advice no matter how an issue arises. WSOP officials say one of their hopes is that any change will serve as a better way to do something that is in the best interest of the majority of the stakeholders involved. Palansky credits player recommendations with some major improvements made in recent years.

“We’ll go about trying to implement it if it is feasible,” he says of player input. “The World Series of Poker really owes a lot to the players for how the payouts and structures of our events are. They have been the ones to provide the necessary feedback to fine-tune them and help keep them the best in the business in terms of value.”

Beyond casual recommendations by way of Twitter, email, and conversations, the WSOP also fields a player advisory council, which is charged with making recommendations for the tournaments.

As for the style of tournaments, the WSOP also looks at popular formats and other ideas from players who may want to add in something new. For example, this year an “antes only” style event and a four-handed tournament were added to offer something new and different. However, Holdem remains the most popular game and the WSOP offers numerous tournaments to cater to that popularity.

In recent years, the series has scheduled several smaller buy-in tournaments (as low as $1,000 and satellites for only $100) to cater to weekend warrior poker players hoping to live the dream and win a big payday. The efforts have been rewarding. These events have created massive fields – a perfect fit for average players looking spend a couple days in Vegas with the chance to bring home some big money.

Getting the word out
As poker has grown since the amazing 2003 run of Chris Moneymaker, so have the number of fans who follow the game. This has created an avalanche of multimedia opportunities for fans to follow the action, and the WSOP is no exception. While online poker played a major role in creating a poker boom, Black Friday in the U.S. (when the federal government cracked down on the game) led to the cancellation of much poker programming. ESPN also decided to ditch much of the live poker programming that had proven so popular in 2011.

Faced with this, Caesars revamped WSOP.com to better serve poker fans. The site features news, online updates, chip counts, and photos of every tournament during the series. Twitter has also proven a popular tool in keeping up with the series. In 2012, longtime poker reporter Jessica Welman was added as managing editor of the World Series official website. While ESPN remains a key broadcasting partner, the WSOP made the decision to ramp up its online webcasts this year. Every final table was shown near-live, many with live commentary by longtime broadcaster David Tuchman, who was often joined by professional players providing insight.

“The multi-camera set up was a huge improvement in my mind,” says Welman. “Many poker livestreams are limited by just an overhead shot and a flop cam, so to be able to come in for close ups, have cameras on the floor, and give the stream the feel of a televised poker show was something I take a lot of pride in. Obviously, the implementation of commentary was a big step as well and I think our expanded efforts with the One Drop coverage gives you an idea of what our streams may look like come 2013.”

The additional coverage is just another way that WSOP officials are catering to poker fans and players – and continue to build the brand.

“From what I can tell, the reception has been pretty positive. Poker fans are always excited to see coverage beyond just live updates and I think stepping it up with a veteran commentator like David Tuchman really helped enhance the experience for WSOP fans this summer,” Welman adds. “The players at the final table were all pretty excited that their friends and family could watch along at home. My favorite moments were when players would bust from the final table then graciously agree to come in the booth and talk with Tuchman about the event. A great example of that was the $5,000 Limit Holdem Championship, where this close-knit group of players all stuck around, came in the booth, and really participated in making that stream one of the most informative and entertaining ones we put together this summer.”

As the final table of the Main Event, the play of the “November Nine” was moved to Oct. 28-30 this year due to the U.S. presidential election, World Series officials are pleased with how the events continue to grow and reach new audiences. The webcasts also proved a major success this year.

“There were increases in every category of viewership from unique visitors to total site visits,” Welman says. “What category really stands out to me is that we saw the number of hours people tuned into the stream more than double, which means not only were more people tuning in, but the average length of time they spent watching the stream went up substantially as well.”

ESPN will have its cameras back at the Rio in late October to film the final days of action as players battle it out for the $8.5 million first prize, the gold bracelet, and the prestige that goes with winning the biggest tournament in poker. As the WSOP continues to extend its brand to Europe and now Australia, the event’s growth from a handful of players at Binion’s Horseshoe in 1970 to the mammoth poker spectacle of today is truly a stunning phenomenon. Casino impresario Benny Binion always believed the event’s success would come through catering to players – and the World Series of Poker continues to carry on that tradition.

Check out Sean Chaffin’s new book, RAISING THE STAKES: True Tales of Gambling, Wagering and Poker Faces, available as an eBook and in paperback at www.RaisingtheStakesbook.com, Amazon.com, and BarnesandNoble.com. The book features some crazy tales of gambling and poker from underground casinos to cockfights in Puerto Rico. Sean is also editor of www.PokerTraditions.com, a site about poker history, lore, and people. If you have a gambling or poker story idea, contact Sean by email at seanchaffin@sbcglobal.net, or follow Sean on Twitter: @PokerTraditions