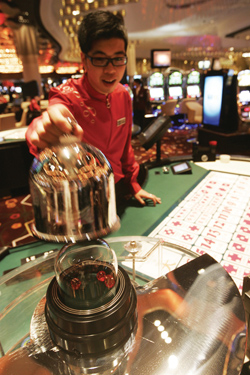 Now, by law, nobody under the age of 21 may enter a Macau casino. Casino operators and analysts expect the raising of the age limit from 18 to make little difference to the gaming business.
The government says the raising of the age limit will help curb social problems caused by gambling, particularly among youths.
The new age limit applies to employees of casinos as well as patrons. Under-21s already working in casinos may continue to do so. The law also now allows the gaming regulator to restrict an individual’s access to a casino if the individual or a relative requests it.
“It is unlikely that there are many casino customers, especially in VIP or the premium mass market, that are under the age of 21,” says Grant Govertsen of research firm Union Gaming Group. “We would estimate that, notably, less than 1 percent of gaming revenues are generated from customers under the
age of 21.”
Mr Govertsen predicts that the effect of the new age limit on gaming revenue will be negligible. He says the new age limit makes sense because it brings Macau into line with other important gaming centres. The age limit in Singapore and Las Vegas is 21.
Gaming operators applaud the new rules. A spokesperson for Sands China Ltd says the company “is in full support of the government’s under-21 initiative. We do not see an impact to our future business”. Less than 1 percent of Sands China employees are under 21 and the company foresees no drop in the number of candidates to fill vacancies.

Three more cheers
Only 2 percent of Galaxy Entertainment Group Ltd’s workforce are under 21, says the company’s vice-president for public relations, Buddy Lam Chi Seng. “They are allowed to continue to work in the casinos,” Mr Lam says.
“Also, our businesses are not limited to gaming only. We have many different jobs on offer, in other areas as well, that allow young people to pursue something different from working in the casinos.”
Mr Lam says his company agrees with the limit. “Galaxy Entertainment is a firm supporter of responsible gaming and a strong advocate of higher education,” he says.
One of the purposes of the new age limit is to encourage young people to further their studies. The above-average salaries offered by the casinos for low-skilled jobs such as croupiers often attracted youngsters that had just finished high school or were university dropouts, who might otherwise have continued studying.
Mr Lam does not expect the new age limit to reduce the number of visitors to his company’s casinos. “The percentage of visitors to Galaxy Entertainment properties under the age of 21 is negligible and we will not be impacted by the new government policy,” he says.
Melco Crown Entertainment Ltd told Macau Business the new law is unlikely to have any significant impact on business.
Wynn Macau Ltd says it supported what it considers an “important government initiative”. It foresees no adverse effects on its business.
MGM China Holdings Ltd and SJM Holdings Ltd did not reply to Macau Business requests for comments.

What goes up
There is no up-to-date data available on how many casino employees are under 21. The most recent official figures show 2,800 under-21s were working in casinos in 2010 and that casinos employed one-fifth of all workers aged 18 to 21.
The gaming industry had nearly 53,000 employees at the end of June. Croupiers accounted for 44 percent and a large proportion of the rest did other jobs on the casino floor, working for example as cage cashiers, pit bosses or slot-machine attendants. The average salary in the gaming industry at the end of June was MOP17,740 (US$2,218), about 60 percent more than the median monthly earnings of all employees.
The Macau Gaming Industry Employees Association’s vice-president, Lawrence Tai, does not foresee any reduction in the availability of croupiers under the new rules.
His association is among the main trainers of casino workers, having trained more than 15,000 croupiers since its establishment in 2002.
“Over 95 percent of our students are 21 years old or above,” Mr Tai says. But he notes some under-21s were among the 320 students enrolled in the two baccarat courses held by the association so far this year.
The raising of the age limit was proposed in 2008 by the chief executive at the time, Edmund Ho Hau Wah. Curiously, it was Mr Ho who put forward, in 2001, the bill to lower the minimum age for access by residents to gaming tables from 21 to 18.

Check behind the ears
The government submitted the bill to raise the age limit to the Legislative Assembly last year. The assembly took more than a year to pass it. Some members had misgivings, pointing out that that an 18-year-old in Macau may vote, marry and be a party to a contract.
A problem for casinos is how to prevent under-21s from getting in. Gamblers in general are not required to show identification before being allowed entry.
The casinos say they will tighten their screening for age. But in busy periods such as the National Day holidays, when crowds of visitors from the mainland pour into the casinos, effective screening will be hard.
Sands China says it has enlarged a number of the entrances to its gaming areas to make it easier for its security staff to detect under-21s. The company has also increased the number of security staff at the entrances to its gaming areas.
“Those of youthful appearance will be requested to produce proof of age prior to being allowed access into a gaming area,” Sands China’s spokesperson said.
“All operational staff are being given additional awareness training to ensure that they are aware of the changes to the law, and that each and every employee has a role to play in ensuring that individuals under the age of 21 do not gain access to a gaming area.”
A spokesperson from the Gaming Inspection and Coordination Bureau says: “All entrances to a casino floor should have clear signage to remind customers that any players under the age of 21 years old should be prohibited from entering.” Casino staff are authorised to demand that a player show identification if they have doubts about the player’s age.
The bureau will not assign any of its own personnel exclusively to monitor the enforcement of the new age limit. “In case there are disputes between the players and the casinos, our bureau inspectors will come to assist in settling the disputes,” the spokesperson says.
A casino that allows in an under-21 is liable to a fine of between MOP10,000 and MOP500,000. Claiming that it did not know is no defence.
An under-age gambler is liable to a fine of between MOP1,000 and MOP10,000 and, if they win, is liable to have their winnings confiscated by the government.

Grant Govertsen of research firm Union Gaming Group says the forthcoming ban on smoking in casinos is much more of a worry for the gaming industry than the new minimum age for entry to casinos.
“In other markets that have instituted 100 percent smoking bans, gaming revenues have typically declined by up to 10 percent. For Macau, we think the impact will be much lower, given that it is only a 50 percent smoking ban,” Mr Govertsen says.
The rules for smoking areas in casinos were gazetted last month. The ban on smoking in casinos comes into effect on January 1.
Casinos can designate up to half of their gaming floors as smoking areas. In contrast, no smoking is allowed anywhere in restaurants and cafes. Casinos are allowed smoking areas because the authorities were persuaded that a complete ban on smoking would be bad for the gaming business in particular, and the economy in general.
Existing casinos must separate smoking and non-smoking areas with either 4-metre wide buffer zones, air curtains, 2-metre high walls or special ventilation systems. Future casinos must divide their gaming floors physically and have separate ventilation systems for their smoking  and non-smoking areas. If casinos have more than one floor, their smoking areas must be on the upper floors.
The smoking arrangements must be approved by the government. The rules do not say what proportion of a casino’s gaming tables must be in non-smoking areas but the government will take the distribution of tables into account when considering the casino’s smoking arrangements.
Casinos must ensure that the quality of the air in smoking areas meets a minimum standard, and give the Health Bureau monthly reports on air quality.
To protect the health of employees, they must be rotated between smoking and non-smoking areas. Employees who are pregnant or who have recently given birth, and employees with cardiac or respiratory ailments will not be allowed to work in smoking areas.
Casinos that break the rules may have their smoking areas reduced in size, or may face a complete ban on smoking on their premises.

Once a gambler…
Latino America