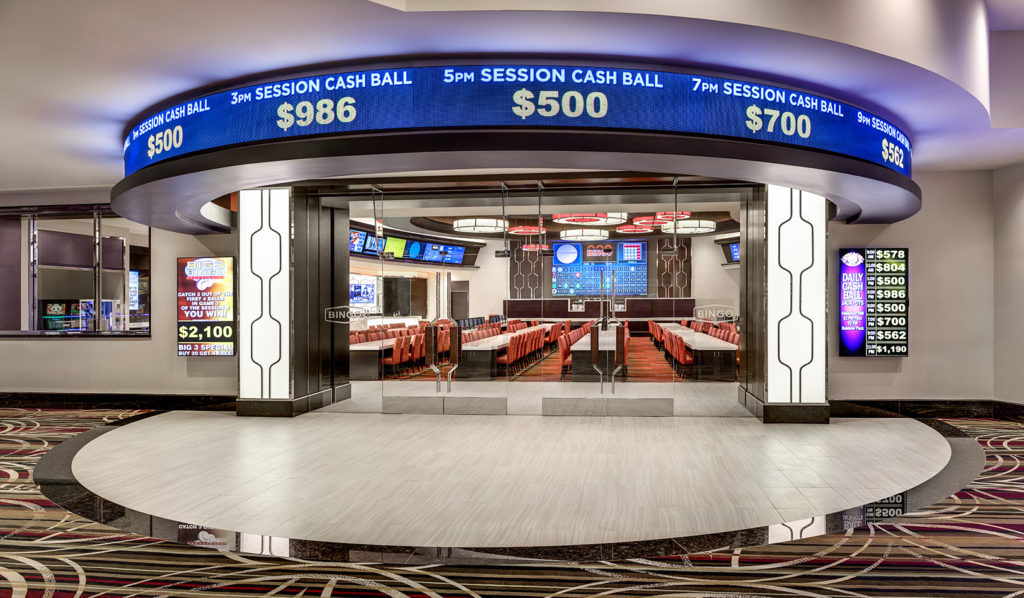 Station Casinos is well known to Nevadans, catering to a strong locals market; Palace Station is not far from the Strip, and the property recently installed an LED ribbon plus displays inside the bingo area. Dave Merlino, VP Sales for Western United States for NanoLumens, talked to us about the project.

Dave Merlino: They’ve been putting a lot of money toward renovating bingo halls in a lot of properties at Station so, yes. My assumption is that business is brisk and bingo activity is working well and is profitable. I have walked by and looked in bingo rooms and they have been quite busy. I don’t know the numbers but from observation, it’s doing very well.

CI: NanoLumens were asked to create quite a spectacular entrance to the bingo area at Palace  Station, is that right?

DM: They have a big curved wall outside the bingo hall, and we added a large LED ribbon around the outside to really give it some pop; you can see it now from quite a distance, and it gets the attention of people and lets them know what’s going on. It helps draw people in or at least gets them looking in the right direction.

CI: Did Station Casinos come to you – how do they know your work?

DM: We have done a variety of projects with Station Casinos all around Las Vegas. We have a showroom here in Vegas and they were interested in LEDs as a potential solution originally to replace the projectors at some of their sportsbooks. That’s been a great success; when they started renovating this bingo hall they knew that we also have patented curved LED technology and the architecture of the entrance is a big convex curve, up in the air perhaps 15 feet. It lends itself perfectly to a nice LED curved ribbon which is very eye-catching.

CI: What’s the square footage of this installation?

DM: For this ribbon display it is 11 feet long and a foot tall; it’s not huge, but it’s effective. It’s curved, convex, and the curve is dramatic and wraps around the wall. But that’s just the entrance – on the inside we have put a very high-resolution 2.5mm narrow Pixel Pitch display and that is where they drive the numbers for the bingo. It’s much bigger, better, easier to see and it’s more fun. Additionally, they renovated the entire space so we had a beautiful clean updated space, with a separate smoking area, and our giant displays drawing attention and also part of the game.

CI: You can genuinely put your displays anywhere…

DM: Yes, we can retrofit, put power points anywhere, data points anywhere, we try to make it very easy to work with us. But when someone is designing a building, a lobby or bingo hall, whatever it is, they like to know specifically where you want these things. The more specific we can be, the easier their lives are. In an existing wall, we can build a display wherever the power happens to be, it’s not a problem.

We can make a display as tall or as long as you like; in Miami airport we have a ribbon that is several feet tall and a 181 feet long, and it’s double-sided and it curves. If you can dream it up, we can do it.

Our displays are also very energy efficient and they do not generate much heat – you can use a large display in a bingo room like this and it doesn’t affect the ambient conditions of the room.