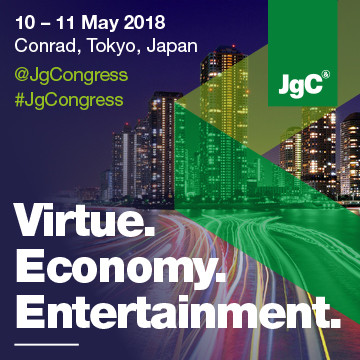 Caesars Entertainment President and CEO, MarkFrissora was in Osaka and held a meeting with Governor Ichiro Matsui and Mayor Hirofumi Yoshimura. Caesars became an Official Partner with Osaka in its bid to host the 2025 World Expo in Yumeshima, next to the planned site for the major IR. The meeting with the governor and the expo sponsorship demonstrated Caesars’ strong intention to bid for the Yumeshima site. Caesars is, in fact, the fourth international IR operator to become Osaka’s Official Partner on the expo bid, following Melco, MGM, and Hard Rock.

Rory Credland, Event Director at Clarion Gaming, explained: “The current state of play in Japan could potentially see a gaming Bill pass in June thereby enabling a number of licenses to be issued and in the process create one of the most significant jurisdictions in world gaming. “JgC will provide a platform for delegates to meet with the prefectures and decision makers behind the bill, and gain some real up to the minute insight as to what the legislation will look like, bearing in mind a preview has not been released.”

Japan Gaming Congress 2018 will focus on a variety of topics, including updates to the much anticipated legislation including bills related to ‘Problem Gaming’ and general IR regulation which are estimated to be announced during 2018.

In addition to these tracks, the event will look at setting realistic expectations on the positive impact an IR will have on the local communities.

Some other key topics will include:

The full conference agenda is now available at www.japangamingcongress.com