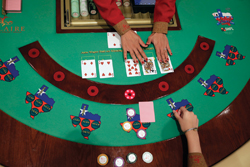 Macau has been called ‘Asia’s Las Vegas’ but the operators of the Philippines’ newest gaming property – Solaire Resort & Casino in the fledgling Entertainment City at Manila Bay – don’t think it ever will be. They believe it’s possible there will be two casino gaming hubs in East Asia. The predominant one will be Macau but with a uniquely Chinese flavour. The other one could be Entertainment City with a much more Las Vegas feel to it.
“We believe we are the only Las Vegas-style casino in Asia today,” says Michael French, Solaire’s chief operating officer. “The rest of them are casinos that have roots in Las Vegas but are not Las Vegas style. The Venetian Macao is not the Vegas experience,” he asserts.
“The Filipino culture is more like American culture from an entertainment point of view etc. We realised we shouldn’t try and implant a Chinese-style gaming experience and hope the Filipinos will like it,” states Michael French. “All of our research told us Filipinos see gaming as entertainment, they want to have fun, they like to see pretty girls, they like complimentary drinks etc. Chinese people like to have fun, but they compartmentalise their gaming and entertainment experiences. For Chinese people the gaming is serious. And when that’s done, it’s time to party. Vegas made its fortune by people going partying and gaming at the same time.”
Michael French is a six-year veteran of gaming resort management in Macau so has seen life from both sides of the South China Sea as well as from the United States. He is a former senior vice president, and general manager of Melco Crown Entertainment Ltd’s VIP-focused Taipa property Altira Macau, and a former senior vice president of its sister Cotai property City of Dreams. Dennis Andreaci, his senior vice president for gaming at Solaire, has served in several senior Macau roles including SVP of gaming operations at Galaxy Entertainment Group Ltd’s Galaxy Macau.

Where the ‘fun’ stops – in casino management terms – and the serious business of trying to generate big casino revenue for Solaire begins, is in the upstairs VIP area with its 95 tables. Mr French says rolling chip commission and revenue share incentives are both available to junket operators to encourage them to bring international high rollers over.
Ben Lee of iGamiX Management & Consulting Ltd tells Macau Business following Solaire’s opening on March 16 that six junkets had been signed up initially – three Chinese junkets, two Korean ones and a single junket from Taiwan. The consultancy reported they were being offered either a 1.5 percent rolling chip commission or a 52.5 percent revenue share. In the Macau market the government expects operators to cap chip commission at 1.25 percent, though it hasn’t given any official guidelines on revenue share levels as far as Macau Business is aware. Ben Lee of iGamiX adds that one of Solaire’s junkets said there was an additional incentive available there on revenue share of 3.5 percent – taking it to 56 percent – if the junket exceeded by 35 percent a minimum monthly roll of HK$80 million. “On the straight [rolling chip] commission side, the breakdown is 1.4 percent plus 0.1 percent for expenses and a bonus of 0.1 percent if they again exceeded their target by 35 percent,” adds iGamiX.
Michael French declines to go into the details of Solaire’s offer to junkets, but concedes the importance of VIPs to the US$1.2 billion project.
“Eighty percent of the gaming revenue in the casino industry comes from 20 percent of the gaming customers. That’s not unusual,” he explains.
“Overall the tax rate here in the Philippines is 27 percent [of the gross] for mass and 15 percent for rolling chip/VIP/international junket players. That compares to Macau’s 40 percent. The thinking is of course that if we have a lower tax rate, that allows us more flexibility in commissions paid to the junket operators, thus incentivising them to bring their customers here.”

A 9.5 percent equity partner in Solaire Resort is Global Gaming Asset Management (GGAM), a company chaired by William Weidner, a former president and chief operating officer of Las Vegas Sands Corp and the man who led the development of Sands Macao and The Venetian Macao. Also on the GGAM management team are Bradley Stone as president, and Garry W. Saunders as executive vice president. Mr Stone is a former executive vice president of LVS who oversaw the construction of its Marina Bay Sands casino resort property in Singapore. Mr Saunders is also chairman of SHFL entertainment Inc., a supplier of casino slots, electronic tables and card shufflers in major casino markets including Macau and Singapore.
Gaming tax rates “absolutely do make a difference” when it comes to offering gaming jurisdictions a competitive edge, Bradley Stone tells Macau Business.
“Nothing is going to be the next Macau – unless we see gaming in Shanghai or somewhere like that. We’re not trying to be the next Macau. People in Hong Kong will continue to go to Macau, but we hope once in a while they’ll come over here to do something different and experience something different. We do have the advantage of a lower [gaming] tax rate. We’ll use that in terms of our [junket] commissions, but it’s not necessarily [in order] to go right at Macau. It’s to encourage people and give them more reasons to come to the Philippines once in a while and try out our resort,” states Mr Stone.
“We will have some junket rooms that are full time junket rooms like Macau has. But we’ll have a lot of what we call casual junkets, where they come in for a couple of days and we give them a temporary space,” explains Bradley Stone. “They’re not going to be able to come every day like they do in Macau. In Macau those junket rooms are operating 24-7. The people are either coming from some part of China or Hong Kong or whatever. We will have a limited amount of that. We will have a lot more junkets coming in that are smaller and will come for a couple of days. I think we’ll get some foreign business that Macau doesn’t get so much of, because you can’t fly directly to Macau. You have to go through Hong Kong,” says the GGAM executive.
“As a country – by 2017 – the Philippines doesn’t need to be doing 35 percent of Macau [current] VIP [revenue]; we don’t need to be 25 percent; we don’t need to be 15; we don’t even need to be ten. If we do seven or eight percent [equivalent VIP GGR] of what Macau does today – which is in total say roughly US$30 billion [annually in VIP] – then we’ll do very well,” adds Mr Stone.

He describes the mass-market floor at Solaire – which has 200 tables and 1,200 slots – as “aspirational” and aimed at the upper segment of the mass market. On opening day, minimum bets on the mass live dealer tables appeared to be mostly 500 pesos – that’s below HK$100. It is several years since Macau Business recalls seeing HK$100 minimum bets available in the major Macau casinos. But it’s probably appropriate to the Philippines, were gross domestic product per capita was US$4,295 (HK$33,339) last year on a purchasing power parity basis, according to the country’s National Statistical Coordination Board.
“People aspire to move up in life,” says Bradley Stone, referring to Solaire’s mass floor. “You can’t make a venue intimidating, so that people feel uncomfortable. In this space they’ll feel very comfortable – whether they’re betting 500 pesos a hand, or 5,000 pesos a hand in the mass area. The mass doesn’t want to be in a crummy place.”
Solaire certainly isn’t. The property – which cost US$750 million for the first phase and so far has 500 hotel rooms – compares strongly to the best of Macau and Las Vegas. A ‘Phase 1a’ is currently under way at a cost of US$400 million and management says it will double the total resort area. Such a big investment requires a stable political and regulatory environment. Bradley Stone dismisses suggestions that the Philippines might not be a robust jurisdiction when it comes to anti-money laundering rules and fighting corruption.
“As a regulated industry, the Philippines [casino industry] is up there,” he tells Macau Business. “There are lot of places that are a lot less regulated. So we feel very comfortable about the regulatory regime here. And so do the [financial] markets. There are only two things that stop you going into another market. One is that the regulators are uncomfortable about you going in. The other is the markets are uncomfortable about it. The markets clearly aren’t uncomfortable because we were seven times oversubscribed on our IPO [initial public offering] by the biggest [investment] firms in the world – the Fidelities, the Capital Researches, the Singapore sovereign fund – etc., etc.,” explains Mr Stone.
“In this property here we own nine and a half percent of the public shares. We would have liked to own more, but we couldn’t. That’s what Ricky [Razon, chairman of Solaire’s majority Philippines-listed owner Bloomberry Resorts Corp.] was willing to do with us. Here, we’re a manager and part owner. And as I say to the shareholders, ‘You should feel good about that’ because we own more than the public owns in terms of shares. So our interests are aligned as a management company. We’re not just sitting there trying to earn a fee,” states Mr Stone.
“There are other projects that we might announce shortly that are more management fee based. And Bill Weidner [GGAM chairman] has been working on Matsu [a casino proposal for Taiwan]. That would be something we would own and maybe find partners for. It’s a question of whatever fits. But the key for us and anything we get involved in – even if it’s just managing – is ‘Can we bring a value add?’
“We prefer to be selective about our projects in order to keep our good reputation and get a good return for whoever the owner is – whether it’s us or someone else. And by managing a better return for all the investors, we also make more,” says Mr Stone.

Macau designs on and in Manila

Conde Group, an international design consultancy with operations in Macau and clients in the local gaming industry, has been involved in the creation of branding and marketing materials for the new Solaire Resort & Casino in Manila.
“We first developed the look and feel of the brand, its market positioning and the elements of distinction and differentiation,” says Rebecca Choi, one of the firm’s directors.
“Then we worked on the development of the applications to all ‘collaterals’ of the hotel, resort and gaming,” she adds. “Collaterals are pretty much anything a guest can feel or touch – from printed materials to packaging and the paper napkins used to serve drinks. We also worked together with Solaire on the development of the restaurants’ branding.”
The main branding for Solaire featuring a half sun with rays flowing from it, was the idea of Las Vegas-based firm SK+G. The Solaire property, which has 500 rooms in its first phase, opened on March 16 with a ceremony attended by the country’s president, Benigno Aquino III.
Conde Group’s gaming industry customers in Macau include: Sociedade de Jogos de Macau; Galaxy Entertainment Group Ltd’s Galaxy Macau; Mocha slot clubs; and Sands China Ltd.
Conde Group was invited to bid for the Solaire contract because an executive who approved some of its work for Sands China Ltd in Macau then moved to the new Manila project.
M.G.