Bally Technologies and SHFL become one

Gaming technology innovator Bally Technologies, Inc. kicked off 2014 bigger and better than ever.
In late November 2013, the global company completed its acquisition of SHFL entertainment. The $1.3 billion acquisition transformed Bally into a gaming technology powerhouse with an unparalleled portfolio for the worldwide gaming industry.
“From electronic gaming machines (EGMs) and proprietary table games, to casino systems and online gaming, we now offer the most complete and dynamic range of products available for the casino gaming industry,” said Marco Herrera, Bally’s Vice President of Europe, Middle East, and North Africa.
The deal brought together two highly complementary gaming companies with long histories in the industry. The leadership team also came together, with talented executives from both companies making up Bally’s new senior management team.
“Bally and SHFL are both customer-centric gaming technology companies with a strong culture of commitment to innovation and quickly adapting to change in a fast-paced industry,” said Adrian Halpenny, Bally’s Senior Vice President of Australia and Europe.  “As a combined company, we are well-positioned to continue industry-leading innovation and growth while enhancing our ability to serve our customers.”
Since the combination closed, Bally has dedicated significant resources toward integrating the two companies and the customer response to the integration has been positive.
This was evident in London at the ICE Totally Gaming trade show in February, when table game and utility products exhibited under the Bally banner for the first time.
A few days after ICE, Bally provided an update on the integration during its second quarter fiscal year 2014 earnings call. President and Chief Executive Officer Ramesh Srinivasan described the second quarter as “transformative,” noting that Bally completed the SHFL deal months ahead of schedule. He also said the integration process was moving forward smoothly, with the sales, service, and product development teams already integrated.
Even with the additional work of the ongoing integration, Bally executed well on its core business. The company announced record quarterly revenue of $285 million, including a record $85 million in systems revenue.
“The combination has been an excellent fit and it’s been a great experience getting to know our new team members as we work closely with them to build an ever more successful company that meets the needs of our casino partners,” Halpenny said.

Bally Interactive Expands Content
for Internet and Mobile
Bally’s iGaming and mobile solutions are designed to give casinos a single view of the player across online, mobile, and traditional brick-and-mortar gaming platforms and provide a complete cross-platform gaming experience for both free-play and wagering.
The Company is focused on the integration of traditional land-based and iGaming systems for enhanced cross-platform bonusing, player tracking, and business intelligence; the Bally iGaming Platform for Internet and mobile casinos; and the Bally Mobile Platform for concierge casino apps and mobile websites.
Bally’s open iGaming Platform  enables casinos to choose from best-of-breed free-play and wager-based poker, table games, video slots, bingo, and sports-betting content from some of the most popular and proven content vendors in the industry. This host of new online and mobile content includes some of Bally’s most successful slot titles, big licensed brands, progressive functionality, proprietary table games, and more.

Table Games Products Continue to Make an Impact
SHFL entertainment’s entire library of well-known proprietary table games and innovative utilities products will continue to be available to European casinos. Meanwhile, the company will continue to produce the most exciting games in the business to help thrill players and bring strong return-on-investment for customers.
Casino operators appreciate i-Table games’ automated betting and wager-resolution process that can dramatically increase game security, accuracy, and speed, resulting in more rounds per hour while eliminating errors – a key advantage on specialty table games that have complex paytables with high odds and complicated payouts.
New proprietary table games like Double Draw Poker and One for the Money will begin being featured in Europe, along with the company’s first-ever roulette side bet, Back 2 Back, which lets players win up to 1,000-to-1 on a single spin.
From the Utilities segment, popular products like the ChipStar roulette chip sorter; the i-Score double-sided display; the MD3 blackjack and baccarat card shuffler; and the DeckMate 2 poker room card shuffler with Shuffle Flex will be among the next generation of innovations. Shuffle Flex technology introduces a groundbreaking “pay-by-the-shuffle” concept.
That’s all in addition to items like the popular one2six Multi-Deck Shuffler with its user-friendliness and state-of-the-art technology that make it perfect for use  on multi-deck games like blackjack and Casino War.

Company to Continue Its Focus on Creating Innovative Games
The popular Equinox cabinet and titles such as 88 Fortunes™, originally created by SHFL, will join an impressive games suite. Highlighting upcoming offerings are a trio of branded titles that follow up on the success of popular Bally titles such as Michael Jackson King of Pop™, Michael Jackson Wanna Be Startin’ Somethin’™, and Pawn Stars™.

TITANIC
TITANIC video slots by Bally deliver a fully interactive and cinematic experience centered on the iconic star-crossed lovers from James Cameron’s TITANIC, one of the highest-grossing films in history. Featuring scenes from the film and music from the blockbuster phenomenon, TITANIC integrates many of Bally’s proven play mechanics, four mystery features, and three progressive jackpots including two minor mystery jackpots and one large top award. The main attraction U-Spin bonus wheel, resembling a ship’s helm, awards credits as well as one guaranteed Free Games feature – Heart of the Ocean, Make It Count, and the Safe Bonus.

But it’s not all about brands. Bally remains laser focused on providing innovative offerings aimed specifically at the European market.
Bally is expanding its Pro Series™ content library with many new games featuring engaging play mechanics, themes, and graphics that deliver an exceptional play experience. The new offerings include a pair of new multi-game suites, each combining four popular games into one versatile platform, as well as the new Game Xchange Multi-Game, which enables operators to change or add titles.
Plus, Bally introduced a brand-new cabinet this year with the groundbreaking and award-winning ALPHA 2 Pro Wave featuring the industry’s first concave LCD monitor. Four fresh titles will be available on the Pro Wave, in addition to plenty of proven Bally games previously available on the Pro V22/22 or V32 cabinets.

• Senior Vice President of Operations and Human Resources Gary Kapral. Kapral has been with Bally since 2005 overseeing organizational development and implementation of Bally’s global human resources strategic-growth initiatives. For the past year, Kapral has also been leading Bally’s operations and global supply chain.

• Senior Vice President of Technology Bryan Kelly, who joined Bally in 2004 and manages the research and development of new gaming technologies.

• Senior Vice President of Customer Services Sridhar Laveti. Laveti joined Bally in 2006 and is responsible for managing the services and support teams for the games and systems divisions.

The latest innovations from Bally Systems takes players places they have never been – literally. Take ‘n Play enables players to take their game “on the go” for the first time by playing a physical slot machine on the convenience of a tablet. Take ‘n Play is the industry’s first technology that allows the same slot machine game to be played in more than one location by streaming the game content directly from the slot machine to a tablet. This product provides casinos with an easy, convenient solution for players who get up and leave their machine to smoke, get a drink or snack, or have to leave when their friend or partner is ready to move on.

Adding excitement and activity to any casino floor is the award-winning Elite Bonusing Suite (EBS), including Virtual Racing, Virtual Racing NASCAR, and DM Tournaments, which have powered five world record-setting events. Bally recently unveiled a new addition to its EBS portfolio – Bonus Tournaments, which enables casinos to run floor-wide tournaments in which both the base game and the tournament game can be played at the same time.

Super Slotline has the ability to revolutionize casinos with serial floors that were previously unable to use advanced technology to run floor-wide promotions and events that drive increased coin-in, new player’s club registrations, player excitement, and even power world records. Now casinos with legacy networks can easily and cost effectively convert to high-speed Ethernet-style networked floors that enable the use of the latest in powerful floor-wide technologies. 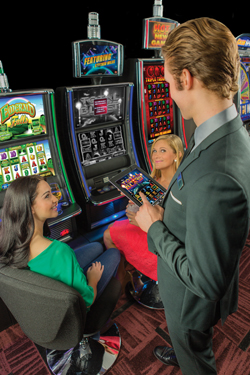