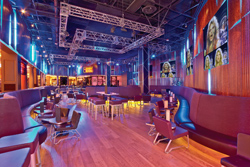 It’s a very bold move, taking a property as elegant as The Venetian and putting what is basically an 80s rock-themed bar right next to the gaming floor – but it not only works, The Bourbon Room is positively thriving. It’s part of the casino’s drive toward a more experiential event for customers, as it ties in with the arrival of Broadway show Rock Of Ages; the bar is actually themed around the show, and named for one of the key locations in the story, but with subtlety so visitors who do not know the smash hit play won’t be put off. 80s rock videos, 80s outfits, and somehow it really works, right in the middle of The Venetian.
Casino International met Joshua Zinder, architect and designer, and principal of Joshua Zinder Architecture + Design, alongside a very happy customer in Las Vegas Sands’ Executive Director of Interior Design, Mark Signorio.

Casino International: The new bar at the Venetian, it’s themed after the musical Rock of Ages, is that right?
Joshua Zinder: Yes, it’s tied to the Broadway show Rock of Ages. The idea was that it’s supposed to be themed and have the same feel as the show, without being a direct copy of the sets. The concept behind the design was the notion of backstage meets back alley, – it’s a little bit raw, which is why as part of the look we have incorporated metal panels and also used stage trussing.

CI: Is a customer supposed to walk into the bar and think ‘Rock of Ages’ or is it supposed to be a bit more subtle?
JZ: It’s supposed to be a little more subtle, but the Broadway show is now at The Venetian, so if you’d just walked out of the show you’d feel completely at home here. At the same time if you don’t have that experience, and come here, you’d be charmed by the 80s rock elements, the stitched leather, metal studs, a real contrast to what one would expect to find in the Venetian. We tried to make it a little rough around the edges and that was a real challenge, that transition from the Venetian to this space. We needed softer elements that would appeal to The Venetian but at the same time open this space up, so it welcomes people.

CI: You expect a certain quality, a class from The Venetian. So was this a bar area before?
JZ: It was, but it was an Italian Baroque-themed bar with a stage in it. We’ve added a little bit of square footage, but have also doubled the seating capacity. The original stage was about the same area as the platform we have in here now; it’s more the way it was laid out that we have changed. A lot of the Baroque detailing they had in here before restricted what we could do with seating layouts, so we’ve been able to open it up a lot.

CI: How many times did you have to see Rock of Ages to do this job?
JZ: I only saw it once! I’ve been once since we finished the bar too, because I took my kids to see it. When I went the first time, because it was business I was taking notes, making sketches, trying to absorb what was going on.

CI: Now you’ve seen the show for pleasure, do you think the Bourbon Room does everything you set out to achieve? Have you hit that level of recognition – or subtlety – you were striving for?
JZ: For me what’s important isn’t so much that it has the recognition from people leaving the show or otherwise; I stopped in The Bourbon Room last night and it was packed, and this was a Thursday night! For me, that’s what’s important. I like to know that we’re giving our clients what they ask for and we’re helping them with their ROI, and along the way we’re making spaces that are really beautiful.

Mark Signorio, Executive Director, Interior Design, Las Vegas Sands is effusive in his praise for Josh, as he explained to CI…

CI: Why do a Rock of Ages themed room?
Mark Signorio: We’ve got the show running here now, so it’s a tie-in with that. It’s the Venetian property president John Caparella’s vision to extend the experience for visitors to events. It’s not an isolated event with theatre over here and games over here; the Bourbon Room is an extension of the play. At the end of the show you’re invited to come to the Bourbon Room, with live entertainment, interaction with the VeeJay and more.

CI: Presumably it gives you huge opportunities to cross-promote all around the property too.
MS: I think cross-promotion is a buzz-word; we’re elevating our guest experience at this property. The servers will wear clothes from the genre, it’s the perfect environment for people to let loose in, and if you come here in an evening there’s a nostalgic feel to it as well, even if you haven’t been to the show.
We have some amazing entertainment coming here which is all part of John’s vision – he wanted to really invigorate the entertainment component. Some casinos have the show, the casino, the nightclub, it’s all very separate, we’re trying to really integrate the experience here.
The approach was not to do a clone of the show, not just put the set in here – we wanted it to be an extension and a stand-alone entity. We looked at the imagery of the show, we looked at the play, and we settled on this behind the stage, side-stage feel.

CI: Why did you choose to work with Josh on this project?
MS: I’ve worked with Josh on lots of projects and he’s done incredible fine dining restaurants, elaborate high-end finishes, all sorts of things. When I approached him for this job I explained, it’s on the other end of the scale; we built this out in eight weeks and it was not without challenges. We were going to buy off the shelf furniture but the lead times were unrealistic, so I went to Josh and said “great news, you can design the furniture but you have a day to do it.” He pulled it off; it’s a testament to his talent that we were able to design and build all of this in just eight weeks.