Bet on the future 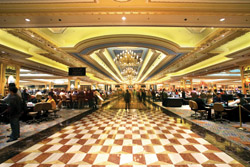 Observers unnerved by slowing growth in gaming revenue may be missing the point – the biggest shift in the market since the opening of the Venetian Macao, has begun.
These changes will almost certainly result in greater profits for casinos and may ease the concerns of the governments here and in Beijing about overdependence on VIP gaming.
This year’s gross gaming revenue figures tell a tale of two markets. While year-on-year monthly growth in VIP gaming revenue has fallen to single digits and even into negative territory at times, growth in mass-market gaming revenue is powering ahead at an annual rate of more than 20 percent. These trends are forecast to continue until the first half of next year.
With VIP revenue accounting for more than 70 percent of gross gaming revenue, the slowdown has eroded the confidence of investors. The sluggish ramp-up of Sands China Ltd’s Sands Cotai Central, which opened its second phase last month, has added to the worries. Amid the decelerating growth, all six casino operators are embarking on new multibillion-dollar casino projects or are expecting to do so within the next 12 months, giving investors further reason to be nervous.
But instead of being anxious about any slowdown or drop in VIP revenue and gross gaming revenue, investors should be cheering the rise of the mass market. “Macau casinos can continue to experience solid profit growth on the strength of the mass-market customer, even if VIP revenue remains soft,” says Grant Govertsen of research firm Union Gaming Group.
“The key is that for every dollar of mass-market gaming revenue generated by a casino in Macau, roughly 40 cents drops to the bottom line as profit. This compares to just 10 cents of every dollar for VIP, meaning that mass-market play is four times as profitable as VIP. With this in mind, it can be calculated that more profits are already generated from the mass-market segment, even though it has typically accounted for just 30 percent or fewer of the gaming revenue dollars.”

Steady expansion
Skyrocketing VIP play has masked mass-market growth in recent years. VIP revenue grew by 70 percent in 2010 and by 45 percent last year, pushing mass-market revenue below 30 percent of gross gaming revenue for the first time since 2004.
But while VIP revenue exploded before slowing this year, mass-market revenue kept expanding steadily.
“In fact, mass-market revenues have grown 30 percent or better over the last 11 quarters,” Mr Govertsen says. “So the growth rate has been stable, even though the base of revenues has become much larger. The VIP slowdown has certainly made the strength in [the] mass market more noticeable.”
As mass-market play comes to form a larger piece of the gaming revenue pie, casino profits can rise, even if gross gaming revenue falls. Moreover, the shift to the mass market will probably boost non-gaming revenue and promote the economic diversification that the governments here and in Beijing say they want.
“The key to the mass market’s continued growth is developing differentiated world-class resorts supported by continued improvements to infrastructure, which makes Macau more convenient to visit,” Galaxy Entertainment Group Ltd’s chief financial officer, Robert Drake, tells Macau Business.
“This would include us offering a diverse array of non-gaming amenities that attracts new visitation, drives repeat visitation and increases the length of stay.”
Galaxy Entertainment announced in April that Galaxy Macau had begun building its second phase. The HK$16 billion (US$2.1 billion) project will add 1,300 hotel rooms to the Cotai resort and double its number of shops.

Tied to GDP
“It’s chicken and egg,” HSBC regional gaming analyst Sean Monaghan says of mass-market growth and non-gaming attractions. “You have to build them to get the people. The more you build, the more diverse the patrons and the more viable the non-gaming amenities.”
Mr Monaghan is the principal author of an HSBC report which forecasts that this year mass-market gaming revenue will grow by nearly 30 percent and VIP gaming revenue by 5 percent, and that next year mass-market revenue will grow by 25 percent and VIP revenue by 7 percent.
The report says VIP gaming revenue will track growth in mainland gross domestic product in the long run, while mass-market gaming revenue has the potential to grow at twice the rate of mainland GDP.
“The resilience of mass gaming is changing the profitability of casinos and buffering the weakness in VIP,” Mr Monaghan says.
“On a long-term basis, we forecast mass gaming will grow to 50 percent of Macau gross gaming revenue in 2020 from 27 percent in 2011. This change in market mix is expected to drive margins, earnings and valuations.”
“Obviously no casino is going to turn away VIP business. However, we think [the] mass market is a much better customer,” Mr Govertsen of Union Gaming says.
“Not only is the mass-market customer more profitable, there is less associated volatility and there is more visibility. They are more predictable in their visitation patterns than a VIP player.”

Percentage game
Melco Crown Entertainment Ltd told Macau Business in a written statement it has been “focusing on its mass-market strategy, which is believed to provide a more stable, loyal and profitable customer base for the foreseeable future.”
Melco Crown says growth in mass-market revenue at City of Dreams, its flagship resort in Cotai, is running ahead of market trends despite the opening of neighbouring Sands Cotai Central. Melco Crown has even reallocated tables from the VIP market to the mass market to meet demand.
“Two-thirds of EBITDA [earnings before interest, taxes, depreciation and amortisation] at City of Dreams is generated by non-VIP sources, mostly mass-market gaming,” it says.
Melco Crown’s Studio City resort, now under construction in Cotai, is also intended mainly for the mass market. “That means a market-wide shift towards mass-market plays to our core strength as a company,” the gaming operator says.
“Mass-market growth helps to ensure sustainable growth through revenue diversification,” says University of Macau gaming specialist Ricardo Siu Chi Sen.
He forecasts mass-market growth may be less affected by unexpected policy changes so investors can predict it better. “And, yes, mass-market growth will help high reported hotel room occupancy and high check-in rates,” he says.
Gaming Market Advisors principal Andrew Klebanow notes “there is a great deal of competition for VIP play, and that competition will continue to grow.”
“Cambodia, Vietnam and the Philippines will all compete with Macau for a portion of the junket market, and they may do so by offering more generous commissions.”
Commissions here are capped at 1.25 percent of rolling chip volume.

Over the horizon
“There are also a finite amount of Chinese millionaires who have a high propensity to gamble, and we are now starting to see the limits of that market,” the veteran industry executive turned consultant says. “Mass-market growth represents the greatest opportunity for Macau gaming. There are still huge swaths of the Chinese population that have not experienced the gaming and entertainment experience in Macau. As the high-speed rail network becomes operational, the mass market will have greater access to Macau.”
HSBC’s Mr Monaghan divides the Chinese market into regions. He estimates that Guangdong, the provinces immediately surrounding it and Hong Kong together account for 74 percent of gross gaming revenue here. The rest of the mainland accounts for only 14 percent of gross gaming revenue and 7 percent of visitors.
“While market penetration in mass gaming is high within Macau’s core market, penetration across other China regions remains inherently low,” Mr Monaghan says. “We believe Macau casino resorts are enhancing their marketing programmes, targeting the mass market and making better use of travel groups throughout China.”
Mr Klebanow says: “More significant is the potential growth of the premium mass market. These are people who have the wherewithal to gamble at high levels but do not use or need a junket operator.”
The shift toward mass-market play neatly fits with the calls by the governments here and in Beijing for diversification of the economy. “Indeed, in the past two years, the government’s position to urge the casino operators to develop more non-gaming facilities is a signal for supporting the mass-market growth,” the University of Macau’s Mr Siu says.
“And, of course, this helps diversification. Mass-market players may not just focus on gambling, but on non-gaming activities.”

More pie
While Cirque du Soleil’s “Zaia” show and the Playboy Club at the Venetian Macao closed early this year, the number of non-gaming attractions for the mass market has increased in Cotai during the past two years.
These attractions include “The House of Dancing Water” show and Club Cubic at City of Dreams, the cineplex and skytop wave pool at Galaxy Macau, and more retail offering, restaurants and bars in the Cotai resorts run by Galaxy Entertainment, Melco Crown and Sands China.
“Without a doubt there is high degree of correlation between the number of mass-market customers and the various non-gaming revenue segments,” Mr Govertsen says.
“These customers have to eat, they have to sleep, and they also might want to be entertained. Quite simply, the greater the number of visitors to Macau, the greater the non-gaming revenue pie will grow. That said, it will always represent just a tiny fraction of the total casino resort revenue mix, which is a function of gaming revenues being so large.”
“The successful development of a large leisure and tourism market is an essential component to support the shift in the Chinese economy to be more focused on driving domestic consumption,” Galaxy Entertainment’s Mr Drake says.
“The growth of [the] mass market in tourism, leisure and travel will continue to assist Macau in diversifying its economy and continue its ascension into a global resort destination. The best is yet to come.”