Laws were introduced one year ago to stop casinos from admitting or employing anyone under the age of 21. Analysts say raising the minimum age for admittance to casinos from 18 has made little difference to the gaming industry, but may constrict the supply of labour needed to staff the new casino resorts in Cotai that will begin to open in 2015.
A spokesperson for Wynn Macau Ltd said: “We have not seen an impact on our business.”
“There has been no significant impact on our gaming revenues,” said a spokesperson for Melco Crown Entertainment Ltd.
None of the other four casino concessionaires was willing to comment on the effect of the new age limit on their operations.
Gross gaming revenue and the numbers of visitors to Macau continue to rise, suggesting that the new age limit has had no
impact on either.
Since the new age limit came into effect in November last year, until August this year, the Gaming Inspection and Coordination Bureau says it has handled 367 cases of under-21s entering casinos. The casinos turned away about 290,000 under-age people who tried to gain entry during that period, according to the gaming regulator.
The bureau has not publicised any information about casino operators being fined for admitting under-21s, nor is it willing to clarify how it enforces the age restrictions.
Since the age restrictions were introduced, the most visible change at the casinos has been extra screening of patrons. If security staff ask, guests must show proof of age.
A casino caught admitting anyone under 21 is liable to pay a fine of between MOP10,000 (US$1,250) and MOP500,000. Ignorance of a patron’s age is no defence. An under-age gambler is liable to pay a fine of between MOP1,000 and MOP10,000 and forfeiture to the government of any winnings.
The government says it raised the age limit to curb social problems caused by gambling. When the Legislative Assembly was debating the bill to raise the age limit, Secretary for Economy and Finance Francis Tam Pak Yuen said one of the bill’s purposes was to protect youths from the perils of gambling until they were “mentally mature”.

Without consequence
A second intention was to encourage young people to further their studies. The above-average salaries that casinos pay low-skilled employees such as croupiers often attracted youngsters straight out of school or university dropouts who might otherwise have continued studying.
All the casino operators supported the bill. In Nevada and Singapore, the minimum age for admittance to casinos is 21.
Macau Responsible Gaming Association head William Kuan Vai Lam says the number of infractions of the law shows that not enough is being done to keep under-21s out of the casinos. Casinos should display more prominent signs showing age limits, he says.
Casinos are already required to display such signs – in Chinese, Portuguese and English – at their entrances, and to indicate the age limit in advertising leaflets they hand out at the border crossings.
Mr Kuan says the government should deploy more staff in casinos to monitor the enforcement of the age limit, and impose heavier fines for breaking the law.
The age limit for employment by casinos should be raised to 23 or 24, he adds. This would give youths time to get a degree, gain work experience in other industries and learn more skills before joining the casino industry.
Mr Kuan, a developer, was an unsuccessful candidate in the Legislative Assembly elections in September.
Union Gaming Research Macau analyst Grant Govertsen says the new age limit has had no measurable effect on the gaming industry, other than increased vigilance to keep under-21s out of casinos. The new age limit has no obvious drawbacks, he says.

Few high rollers
Under-21s already working in casinos before the age limit was introduced were allowed to keep their jobs.
Mr Govertsen says under-21s “would be better served in school” than by working in casinos. He says under-21s “might not yet be mature enough” to gamble responsibly.
Gross gaming revenue from gamblers under the age of 21 was probably minimal, Mr Govertsen estimates. “This makes sense, as most young people simply don’t have the resources to gamble.”
An authority on gaming at the University of Macau, Ricardo Siu Chi Sen, says the age limit reduces the chances of young croupiers turning into problem gamblers.
Gross gaming revenue is unaffected because the casinos rely mainly on the money VIP baccarat brings in, and few high rollers are under the age of 21, Mr Siu says.
But he cautions that the new age limit may exacerbate the expected shortage of labour needed to staff the seven new or greatly expanded casino resorts that are due to begin opening in Cotai from 2015. Many young people potentially willing to work in these casino resorts will be too young.
The Statistics and Census Service forecast last year that Macau will need another 45,600 workers between 2012 and 2016 – 40,000 of them for its hotels and casinos. 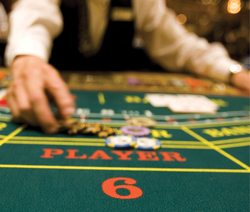