Brazil needs the will

In the age of global communications it is churlish to adjudge as insufficient or ignore  facts and stats available to Brazil’s ruling politician classes so that they are able to debate modern gaming legislation for their country and end blatant illegal gaming, which is tacitly supported by the executive, legislative and other governing powers.
We went to Rio on 17-20 November to attend Clarion’s Brasilian Gaming Congress with much expectancy. The idea was to listen to leading personalities of local and international gaming industry and learn something about Brazil’s real efforts to bring into effect gaming legislation in the short term – meaning before next year’s soccer World Cup beginning 12 June 2014.
As seen in the reports below, we were told from the offset that the Brazilian Congress agenda made it impossible to have any gaming legislation ready in time for June 2014. Indeed, at this early stage some of us were asking ourselves, “what the f are we doing here?” and couldn’t Clarion or another organization have arranged conferences, a symposium or other pressure events last year, or when Brazil won the 2014 World Cup rights so that at least some sports betting regulations had been approved?
Listening to the speakers and reading between the lines we have come to the conclusion that most of the Brazilian political and legislative powers that be are happy with the status quo as is and that a gaming legislation change of heart in the ruling political or executive classes in the near future has as much chance as England winning next year’s World Soccer blue ribbon. But then, hope lives eternal always.
As it is our habit to seek diamonds in the muck and rescue the positive from seas of torment and indifference, we found some stars at the Clarion congress and in the form of local magazine “Inteligência Empresarial” (No. 37, 2013) quarterly, just off the press on the final day of the event with enough material that will help press ahead with the enthusiasm that moves mountains.
Inteligência Empresarial is published by CRIE, the post grad Research and Intelligence Business Centre at (Coppe) in Rio University, and lists 18 articles explaining the full spectrum of gaming in Brazil through the ages and its political infatuation with illegal gambling.
We are in the process of asking for licence to publish some of the articles in “Inteligência Empresarial” and will comment on these in future issues of this title; but suffice it to say that not only is there no official religious stance against gambling in Brazil, in spite of dozens of religious organization representatives in the Lower House, but that most of the people in the country favour legalized gambling, which in its present illegal form generates almost double the revenue of state-run gambling lotteries and product raffles .
We thank Magnho José, leading gaming journalist in Brazil, editor of BNLData and director of MagoCom for his support in the following items and refer to his research stating that illegal yearly gaming revenue exceeds R$18 billion (US$8.6 Billion), “without contribution to the State and society, almost doubling R$11 billion (US$5.24 billion) in official gaming.”
Most of the illegal gambling cash is played in local numbers game “Jogo do Bicho”, which has been going strong in the country for more than 120 years and is the main source of cash support for the famous Brazil Carnival samba schools. Neither dictators nor democratic governments have had the courage to end a popular pastime, which Alexei Bueno in his article “120 years in representation of Brazilian culture” says that “independently of anything Jogo do Bicho should be elevated to the category of Cultural Heritage of Brazil, because this is the truth.”

There may be insufficient time for the Brazilian legislature to rally behind legalizing gambling before the World Cup 2014, or indeed the Rio de Janeiro Olympics of 2016, but the first Brasilian Gaming Congress, organized by Clarion Events, brought plenty of ideas to the table.
The Congress started with a welcome by Julian Graves, Clarion CEO. Those attending this new event next heard from Fabio Cleto, Vice President of CAIXA, Brazil’s largest and state-controlled lottery operator, who stated that the first concern of the gaming industry must be the protection of gamblers. He added that a gathering such as the Brasilian Gaming Congress allowed for an exchange of ideas that would help create the best form of gaming regulation for the country.

Luke Alvarez, CEO Inspired Gaming Group, spoke on projects and opportunities of regulation for sporting events. In his opinion state monopolies in the sector worked against gamblers, with lower returns on their bets. He gave as an example prize money of between 36% and 60% of amounts wagered offered by most countries with monopolies compared to 90% and up in countries with a competitive gambling market.
Alvarez also mentioned gaming taxation paid by operators but actually an indirect tax on the wagering public. He reminded his audience of the Frenchman Jean Baptiste Colbert, who doubled Louis XIV’s revenues in a decade. According to Colbert, the art of taxation consisted in so plucking the goose as to get the most feathers with the least hissing. Gambling taxes benefit the government’s budget without causing a public outcry.
In the afternoon session a debate was held on ‘Placing Brazil on the map of countries with gaming regulation’ moderated by Karen Sierra Hughes, GLI’s Director of Development for Latin America. On the panel were regulators from Chile, Portugal, Panama and Alderney.

Ronaldo: “We have to develop further“
One of the remarkable moments of the first Brazilian Gaming Congress in Rio was the participation of world champion soccer icon, Ronaldo, or as he is best known these days away from the playing fields, Ronaldo Luis Nazario de Lima, as part of the debate on “Focus on Poker”.
Moderating the debate on poker in Brazil was Igor Trafane Federal, President of the Brazilian Confederation of Texas Hold’em, who presented the game as a sport of the mind, which has the formal recognition of the Brazil Sports Ministry. Federal informed the delegates that the government collects 27.5% tax on prize money paid in poker tournaments.
The poker leader was happy to take part in the BgC because it was an opportunity to show that poker in Brazil enjoys rights as a legal activity in the country, adding: “There is a need to have a guaranteed legal base to attract international investment. The regulatory framework is very important to sports betting as well as for poker gaming.”
As part of “Focus on Poker” there were several debates, which included the participation of legal expert Daniel Correa Homem de Carvalho, Steve Kraut, President of the International Gaming Council, Birgitte Sand (Director, SKAT-Denaish Gaming Authority, Santiago Asensi, partner of Asensi Abogados, David Gzesh, of Gzesh Law, and Wulf Hambach, founder of law firm Hambach & Hambach.
Along with Ronaldo in the debate on “Poker as a Game of Skill” was Brazilian professional poker player Andrew Akkar, who sometimes partners the soccer icon in ‘Team PokerStar’. Ronaldo commented that he started playing poker when away at hotels on the soccer circuit and then, when he went to live in Sao Paolo, played with friends in their homes, which was good practice. Later he received an invitation to publicise the game through PokerStar all over the world. “I’ve got much work to do, really!” joked Ronaldo.
World poker champion, André Akkar told the story of his career in poker and criticized the hypocrisy with regards to legalizing gambling: “Brazil has many very good things, like its people, but it also has bad things, and one is that it is one of only a few countries that do not have regulated gaming.”
Ronaldo finished by saying: “I make Andre’s words mine too. Brazil is a very young country and people, and that makes a difference. It’s great to have this debate about poker because we have to develop further.”
At the end of the debate, Igor Federal presented an extensive list of celebrities who like to play poker, such as Michael Phelps, Tiger Woods, Michael Jordan, Magic Johnson, Gustavo Kuerten, Boris Becker, Rafael Nadal, among others, and of course, world soccer icon, the great Ronaldo. 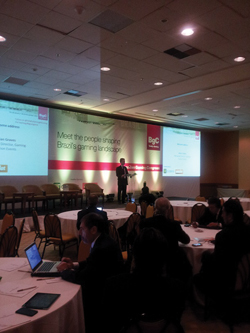