Andrew Cammegh talks to Casino International about the company’s recent huge successes in North America, and much more… 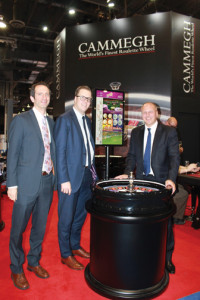 Cammegh has made a science of roulette, expanding their offering from largley wheels just a few years ago to
encompass displays and software to help operators maximise efficiency and make their roulette the most attractive offering possible. It’s not a diversification for the company so much as a natural expansion on what we know them for – they’ve made roulette their business.

Casino International: Which markets have opened up for you recently? And where are you going to focus in the future?

Andrew Cammegh: This year we’ve seen record growth at Cammegh both domestically and internationally, in particular we’ve had a significant level of interest from North America following a successful G2E show. Our big news at the show was that we’d won a major order to supply Roulette Wheels and Billboard Displays to MGM Resorts properties, including, ARIA, Bellagio, MGM Grand Las Vegas, New York New York, Monte Carlo and The Mirage. This deal not only puts Cammegh products in the biggest casinos in Vegas, but also demonstrates the level of confidence MGM Resorts has in our brand which itself is a huge honour.

Following the interest we received at G2E we’ve been looking at expanding our licensing in the US and Canada, most recently we’ve acquired the license for Ontario and we’re in the process of applying for the Michigan license.

In Macau we’ve had some exciting projects, the most notable being the production of eight incredible bespoke Mercury 360 roulette wheels and Billboard Displays for the latest expansion of the Galaxy Macau.

We have continued our commitment to the UK market with installations in Grosvenor, Aspers and Aspinalls casinos to name a few. Our most exciting development has been the approval and installation of Spread Bet Roulette in the aforementioned casino groups which so far has been a great success. The side bet market is something we believe has the potential to add great value to customers with our existing technology and remains one of our core focus’ for the future. Our ambition for the near future is to roll out Spread Bet Roulette to other casinos worldwide.

Elsewhere in the world we have continued to build on our close relationship with operators in Cyprus, Africa and Australasia, which included two notable installations in Crown Melbourne and Sky City Auckland.

CI: How did the MGM deal come about?

AC: Cammegh had been in dialogue with MGM Resorts since G2E 2014, and during the course of the last 12 months has identified a specification for both wheels and displays suitable for this market sector, specifically highlighting large 32” double-sided screens and Cammegh’s unique Voustone stable and durable bowls for the Mercury 360 wheels.

Having exhibited at G2E for 20 years, we’re extremely honoured to have won this order as well as the confidence MGM Resorts has placed in us. It represents a significant milestone in Cammegh’s 25 year history and serves as huge endorsement to our products in the US.

CI: Are roulette wheels still the first thing people enquire about, or do they find you via your associated technologies?

AC: At Cammegh we’re famous for making the world’s finest roulette wheels and that’s the primary source of enquiries from our customers. In the last financial year we saw a record number of wheels sold so it’s still an exciting and growing market worldwide.

Of course, at Cammegh we do have a range of innovative associated technologies, principally our Billboard Display Screens. We’ve been manufacturing Billboard Displays for over a decade and we’re constantly innovating and developing the technology; they integrate with numerous table games and have a host of new features including live TV streaming, custom HD graphics, 3D animations, live data logging and export. Billboard Displays are a common addition to our roulette wheels but they’re also becoming increasingly popular as a standalone product for other table games such as Baccarat and Blackjack.

Another of our associated technologies are our unique roulette side bets, the most recent of which is Spread Bet Roulette which proved extremely popular at the recent G2E show. Spread Bet Roulette is currently approved and installed in UK locations at this moment and we have big ambitions to introduce the side bet worldwide. Our other two side bets, DoubleShot and Lucky Symbols both remain popular with our customers, Lucky Symbols in particular has found success in the Egyptian market and was recently installed in The Omar Khayyam casino.

CI: Where is your R&D principally focussed?

AC: Our R&D efforts focus on the continuous improvement for roulette wheels and the associated technologies which typically go hand in hand. Our R&D is conducted in house but we’re constantly in touch our customers to gather their feedback in order to deliver what they want. This can be seen in some of our most recent innovations such as the Baccarat light box, developed at the request of The Venetian in Las Vegas. Another great example of our continuous improvement ethos are the new slimline Billboard Display Screens currently in development for Marina Bay Sands, which build upon the current Billboard Display design released this year.

As for roulette wheels, we have a dedicated R&D department who are always developing ways to innovate the wheel. Our focus in recent years has been the online market and ensuring that wheel security and data storage is as secure as possible which can be seen with the Mercury 360 and Mercury RRS.

CI: How do you see Roulette developing in the future – and your role within that?

AC: The core game of roulette has remained unchanged for so long and continues to be incredibly popular throughout the world, giving us no reason to think that the game itself will change. That said, we are constantly looking at ways to bring new innovations to the roulette wheel and we’ve often been the world leader in terms of development, for example, we were the first to introduce a maintenance-free bearing, the first to put in-rim sensor technology in our wheels, and the first to open up roulette wheel protocol.

We’ve also developed several unique side bets that work alongside the traditional game of roulette. These serve to enhance the gaming experience without distracting from traditional roulette, giving operators an opportunity to differentiate themselves from their competition and increasing house edge.

The audience for roulette in the online channels has increased greatly over the past few years and is something we can see growing in the future. At Cammegh this is something we have started incorporating into our product development, with the Mercury 360 RRS wheel developed specifically for the online market. Our unique roulette side bets, Lucky Symbols and Spread Bet Roulette also fit perfectly with the online GUI and can add value to the online operators.

The toll of illegal gambling
South American Round Up