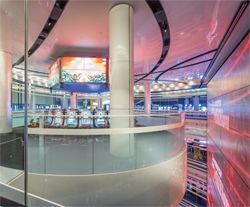 Without sounding cynical, it can take a lot to make the jaw of someone in the gaming industry drop; we are surrounded by splendour and creativity every day. But when images of the renaissance of Canada’s Casino de Montreal arrived, we had to learn more about the project that led to the rebirth of one of the industry’s standout locations. Casino International spoke with Yves Dagenais, Architect, Lead Partner and Co founder at Menkès Shooner Dagenais LeTourneux Architectes and Eugenio Carelli (Architect Associate at Provencher_Roy) about their work on a really quite beautiful casino.

CI: Did the casino’s location [in Montreal, Canada] and relative lack of competition give you more freedom in rejuvenating the space?
Eugenio Carelli [EC]: Casino Montreal is unique as it is not in a competitive area like Las Vegas or Macau, or any other gaming city in the world.
It didn’t stop the client from wanting to do something both stunning and unique. A lack of gaming competition didn’t keep them from wanting to do something exceptional to attract visitors and tourists.

Yves Dagenais [YD]: Perhaps it was a greater challenge because we were alone on this beautiful island. For us, it was a very clear challenge to make the casino an icon; to make it so beautiful that people have to go and see it. It is a unique building in the region and what we have added to it only enhances that uniqueness.
Even if people from Montreal and the area are most of the clientele, what they wanted to do was make it look international, to grow visitors from outside the area.

EC: To increase visibility of the casino on an international level was certainly part of what the owners wanted to do.

CI: So the building has been around since the 1960s, correct?
YD: In 1967, we had the International Exhibition of Montreal. The two islands, Île Notre-Dame and Île Sainte-Hélène, were created to host the pavilions for close to 200 countries of the world; at the pavilions, we had the international exhibition for six months in 1967.
The casino is in what was the French Pavilion; we have added a couple of extensions to it but have tried to be very delicate in our work so the real French Pavilion is still looking stunning and remains well-maintained.

EC: The 1967 World’s Fair was to commemorate the 100th anniversary of Canada itself. Today only a handful of the pavilions remain, the structures were intended to be temporary but the French Pavilion has been there for almost 50 years now.
Ile Sainte Helene is not entirely man made, but Ile Notre Dame was made using the soil displaced from the construction of the Montreal subway. By combining the two islands, a network of channels was created; it is really beautiful now. It’s also the location of the Formula 1 grand prix race, which goes around the Montreal Casino.
CI: What was the building used for after the World’s Fair?
YD: It remained empty for a good 20 years, then the city bought it and transformed it into a kind of museum. It was mostly for housing temporary exhibits. In 1993, Lotto Quebec decided to buy the building and create a casino.

EC: The work we did actually marks the 20th anniversary of the casino.

CI: How did you become involved in the project?
YD: Because we’re good…!
Actually, it’s a government-owned building so they put the work out for tender. We responded and were selected to carry out the rejuvenation.
Before we started, five years ago, was only the French Pavilion with a casino within. It looked great but we had to solve a lot of problems, specifically with the three entrances. This was a problem for operations, security, and customer services because they had to have triple the staff to welcome clients. After 20 years of operations it needed a breath of fresh air and rejuvenation to attract new clients and bring it up to date.

EC: It was also a chance to bring the lighting and security up to date and make everything more contemporary. The administrative offices were relocated, so they could be centralized and work more effectively and this also freed up more areas for gaming. There was also a desire to concentrate the bars and restaurants  in specific areas within the building.
YD: A casino is a multi-headed client; you have the gaming people, security, restaurant, and above all of them, the marketing people. Eugenio worked very had with our other partners to meet with these groups and understand their needs. It’s great to say you want a new casino, a new image, but we have to work very hard with them for at least a year to define this new image and to give a thematic to the casino. To pretend to be international you must have more than looks – you have to have a plan, something to attract people, a story that engages people when they come to the casino. An experience that enchants them, a linearity.
We had to have a strong identity inside to give the ‘WOW’ factor. My design team worked brilliantly with the client to find this WOW, and I think we found it.
The hubs are in the centre of every floor and they are like a large cylinder where you can be entertained, dance, have a drink… It’s like a vertical spine that is visible from the four gaming floors. You can’t miss this spine because it is very well defined by a mix of architectural materials, light and multimedia. On one side of the hubs is a huge five-storey screen, and the other side is the escalators, it brings a novelty and a special effect from the floor to be looking at this central hub. Inside the hub it is a very special environment and experience.

EC: What is unusual about this casino as well is that it is across five different floors. How does the customer orient themselves, and how do you create an ambience across five levels? The hubs become a reference point and a central area for orientation. The five-floor screen unites the floors, as well; the marketing people have developed animations, patterns and lighting effects to make it really visually spectacular.

CI: Were there any structural changes?
EC: The hubs we created in the centre were a completely new addition – it was just an open space, an atrium, before we put them in. We had to create those spaces by spanning 18 or 20 metres. We used interlocking circles, so one circle is a bar, another a lounge area, it’s very casual and an informal ambience, but very refined.

CI: How much input did you have into the job creatively, and how much was the client’s vision?
YD: I think we had quite a bit of freedom.

EC: Yes, we did. The client and our people would challenge us, ask us did we think of maintenance, how would you change a lightbulb six storeys up in the air, it ensured we responded to our client’s needs.

YD: There was great confidence between our client and us. Both offices involved in this, Menkès Shooner Dagenais LeTourneux and Provencher Roy, have worked on several Quebec casinos so we know what we are doing! We understand the needs, we know we have to take care of security, maintenance, lighting… We do not specialise in casinos as such, but in casinos we are probably the most experienced architects in Canada.

CI: Did the casino have to close at all?
YD: Never! If we had to do major work in one area, we would move the tables and slots out of that area to another working space so the casino never lost any tables or machines to our work. We had to work with very good logistics with the project manager; we had people dedicated to doing temporary localisation drawings because of the challenge of never closing the casino. It remained open 24/7 and we are very, very proud of this.

CI: What’s the feedback been like?
YD: The architectural critiques are very positive. It’s a very international and contemporary look, and the operations are very happy because they feel the casino is very different. We had a big reopening in autumn 2013, which is not the high season; the client is expecting a lot of growth in visitors in summer 2014.

CI: Is the job finished, then?
EC: Not quite. We are now working on recreating a cabaret theatre in the Pavilion de Quebec, which is right next door and is linked to the casino. There will be variety shows, performances by singers, dancers, customers can eat there… That will bring in more customers in the future, certainly.