Walking the floor of G2E Asia, as we passed the RGB stand, the Casino International eyes were caught by a multi-wheel, standalone setup, a card game that generated three outcomes in one event. We caught up with Andrew Davies of Central Gaming who explained the many merits of this striking and exciting concept…

Casino International: Tell us about the product…

Andrew Davies: The Central Multi-Wheel product is a flexible gaming device that can be configured 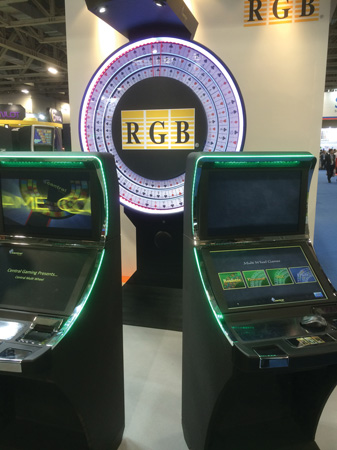 to the requirements of the operator. The name describes exactly what it is, it’s a wheel unit with multiple components that can deliver multiple independent results simultaneously.

When you start looking at the game content, and you can have for example Card symbols, which is basically what we had on show on the unit out at the recent G2E Asia exhibition. The 52 positions occupied by cards, each reel presenting a single shuffled deck. That naturally allows you to play games where you need three cards as an output; the games we were showing at G2E Asia included Community Baccarat, which required one card for the player, one for the banker, and one community card which was shared between both hands to produce the result. That’s an example of a card-based game.

We also have a version of the wheel where, instead of it having 52 positions, it only has 37 positions, and each of the reel strips is a roulette wheel. Where you have a defined area at the top centre of the wheel for the result area, each of the wheels stops and you can have, say, 0, 26, 17 as the winning result and that’s three wheels with the independent results at the same time.

You can put dice on it; we have produced a dice wheel with 48 positions on each reel, so you have eight six sided dice represented on each reel. With this configuration you can play games such as Sic Bo and Craps.

The world is your oyster – operators could decide to have zodiac symbols on it, fruit symbols, anything; and determined by the mathematical model the operator requires, they can decide how many symbols are placed on each of the reels.

CI: So basically, if I’m an operator, I just need the imagination to look at this and think, ‘How do I want this to work?’

AD: The operator needs to have the imagination to see what this thing can do. We have learned from our trials that the device works, and works well, and people are prepared to bet on the outcome of three simultaneous results; in our next installations, we will certainly look at installing with familiar game types like roulette, rather than new gaming concepts, as it helps give customers the confidence to try something new if there is a familiar aspect to it.

In the UK, operators have said to us, and it’s what we have found with our Asian partners, LT Game and RGB, is that to maximise the opportunity with the product and its flexible game options it needs to be connected to an electronic gaming platform. That’s what we are working on now, so the wheel can sit in among terminals, produce the results right away, work quickly… So instead of a dealer driving the game, you have a system driving the game. That’s what we are looking to do with our product, to integrate it into a system, have it automate the result process, and players can bet on the results on a terminal.

CI: It’s almost too much choice for the operators though…

AD: In the Macau market we will start with a roulette-based product because it is a proven and accepted game in that market.  Players bet on automated roulette already which means there is an acceptance for this type of device. That the wheel offers the chance to bet on three wheels, three outcomes at the same time in the same event is a major bonus; three results simultaneously also means you can offer additional betting opportunities, what happens if three 17s come in, what are the odds on that? You can offer exceptionally high odds for a single bet.

CI: What are the immediate plans for product installations in Macau?

AD: We are working with LT Game and have a product in territory now. The initial installation will be in a Roulette configuration. The installation date and location have not yet been confirmed but we are hoping to have everything in place ahead of the Macau Gaming Show in November.

CI: What about plans outside Macau?

AD: We are working with RGB in other Asian territories. We are looking at options now which will likely be a two-wheel installation. That will be two devices, each with three reels, one with roulette symbols and one with cards. This will mean a player at a gaming terminal will have an icon on screen for roulette games, and one for card games allowing them to select what they want to play.

CI: What’s the essence of the product?

AD: We offer a unique and flexible gaming product, that can be used to drive results for multiple game concepts. It can be used as a dealer driven product, be semi or fully automated depending on operator / market requirements. When we first started out with the project, our intention was not to develop games for the product itself. We went to people and showed them what it was, how it worked, and asked what they thought should be played on it. That was our starting point. But it become clear that if we were to take it to gaming shows and introduce it to the market, we had to put a series of new game concepts on it so that people would understand what it was capable of doing. That’s where our initial game concepts came from. Since then we have progressed and developed game proposals based on tried, tested and profitable games. Our aim is to work closely with our distribution and operational partners to develop the best game options for any given territory.