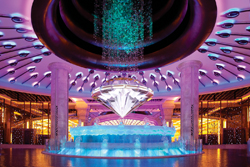 On the back of superb first-quarter results, in which Galaxy Entertainment Group [GEG] announced a 202% year-on-year growth in EBITDA [earnings before interest, taxes, depreciation, and amortization] and Galaxy Macau announced stellar returns of $1.3billion, up 6% in Q1 2012 for the third full quarter of operation, everyone is looking to Cotai for the next stage of Macau’s evolution. With Macau Peninsula itself basically developed, the room for growth is across the bridge and Galaxy is leading the way on the Cotai Strip.
On the announcement of the group’s results, with an eye on Galaxy Macau’s strong showing, Dr. Che-woo Lui, Chairman of GEG said: “This is another set of strong results, our 14th consecutive quarter of EBITDA growth. Both our flagship properties delivered gains in profitability. As Galaxy Macau enjoys its one year anniversary; it continues to exceed our expectations, as well as those of our guests.
“Today’s performance announcement also underscores the exciting potential of our recently announced Phase 2 development of Galaxy Macau. We are constantly striving to achieve even greater success in the pursuit of our goal, to become Asia’s Leading Gaming and Entertainment Corporation.”

Next Phase
Looking ahead to the company’s plans for the next phase of construction on the project, that success is not too far away. Dr. Che-woo Lui explained: “Building on the enormous success of the internationally acclaimed Phase 1 of Galaxy Macau, and the healthy long term prospects for Macau, we are delighted to announce our plans for Macau’s next major development: Phase 2 of Galaxy Macau.”
Phase 2 of the Galaxy Macau project almost doubles the size of the property, making this top casino-resort almost 1,000,000m2 in size. The development includes two new luxury hotels, including the Ritz-Carlton’s first ever all-suite hotel and the world’s largest JW Marriott. This introduces a total of 1,300 rooms and suites to give the property a grand total of over 3,600 rooms and suites across five luxury hotels. Unlike some resorts, Galaxy really is filling its hotel rooms, with occupancy in Q1 2012 December 2011 at a reported 90 per cent.
Retail space within the new development will also be important, with expansion to over 100,000m2, with 200 luxury stores to delight visiting shoppers. The skytop wave pool – which is the world’s largest – will be enhanced, with more for guests to enjoy and beautiful tropical gardens on the Grand Resort Deck that will connect the five hotels. Phase 2 is a very guest-focussed development, confirmed by the addition of an amazing 500 table games and more than 1,000 slot machines for visitors.
Elsewhere, conference and banquet facilities will be increased to cater for up to 3,000 guests – plus 45 new F&B outlets, bringing the total to over 100.
Construction has already begun on this wonderfully ambitious project, with completion set for mid – 2015 from an investment of HK$16billion.
The mid-2015 completion date is to coincide with planned infrastructure developments designed to improve accessibility to the region from China. They include expanding border gates at Macau and Zhuhai, creating a high speed rail network, completion of the ferry terminal at Taipa, a new fast road between Guangzhou and Zhuhai and the construction of the HK-Zhuhai-Macau Bridge, to name a few.
The plans will be financed by a combination of existing cash, cash generated from operations and debt; GEG does not intend to issue equity.  Based on the company’s history of building efficiently and delivering serious ROI, Phase 2 of the integrated resort is expected to be accretive to the Group’s earnings.

Accelerated rollout
Dr. Che-woo Lui elaborated: “We have decided to accelerate the rollout of Phase 2 based on the success of Phase 1 and to align the opening of Phase 2 with the completion of major infrastructure developments in the greater Macau region in mid 2015. These developments will serve as a catalyst for future growth and diversification of Macau’s tourism and leisure market.
“To complement Phase 1’s exceptional hotel offering we are extremely pleased to be introducing Marriott International’s globally recognized luxury hotel brands including the first ever all-suite The Ritz-Carlton and the world’s largest JW Marriott. Marriott International’s core values and The Ritz-Carlton hallmark Gold Standards underpinned by a strong understanding of Asian customers’ tastes and preferences complements Galaxy’s “World Class, Asian Heart” service philosophy.”
GEG Chairman Dr. Che-woo Lui concluded: “As we look into the future, no other operator in Macau is as well placed as GEG to take advantage of Macau’s diversification and booming growth.  After the completion of Phase 2 of Galaxy Macau, we will still have 1 million square meters of contiguous permitted building area for future development. This is an area as large as the combined Phase 1 and Phase 2 of Galaxy Macau. Its development will see GEG diversify its long-term income stream by attracting an ever increasing number of new customers aspiring for a truly unique resort experience in Macau.”