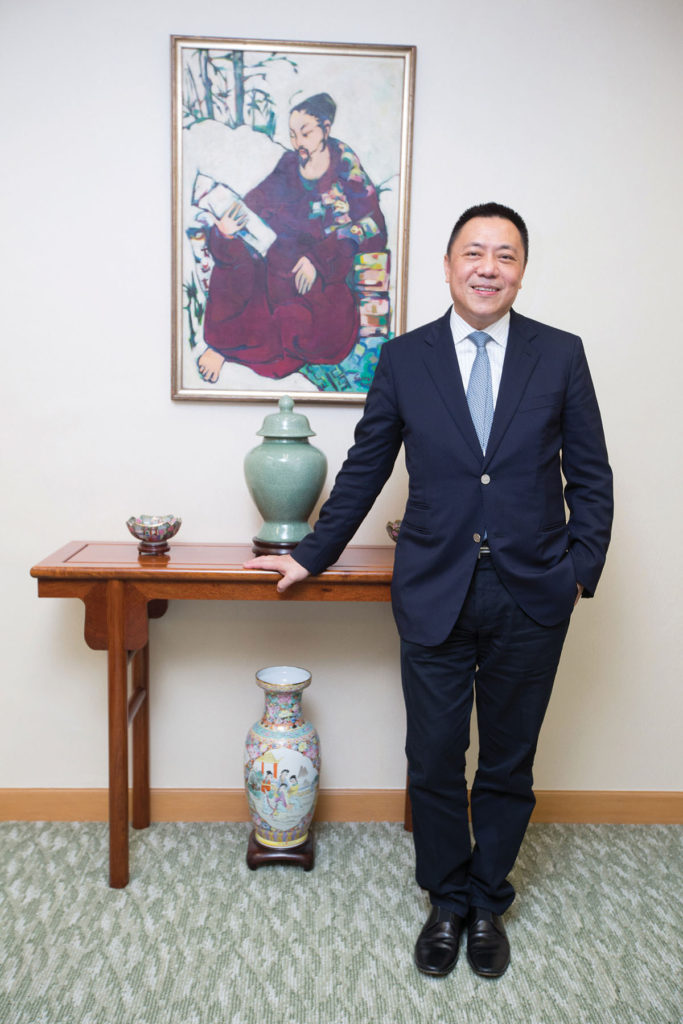 Up to 2023, the government will permit only three per cent annual growth in the number of tables. As at the end of 2015, the number of distributed tables had reached 5,957. In other words, in order to adhere to the three per cent annual rate, the six operators would be permitted just over an additional 330 tables each until 2023. If the mass market is to be promoted, do you feel that the government should remain inflexible in this matter?

What is incorrect in your interpretation is that we will not divide the number of additional tables equally among the operators. The authorisation of tables is a very important measure in the management and supervision of the gaming sector. It’s an important stimulus for gaming operators to invest in non-gaming elements, as well as in other activities that contribute towards Macau becoming a world tourism and entertainment centre.

We must globally consider all the factors, especially the investment in non-gaming areas, the participation by SME’s in these projects, the capability to diversify sources of clients, etc. These are all essential factors for Macau to become a World Centre of Tourism and Leisure.

The market is not static…

That measure may produce a positive effect in diversifying the clientele. Besides, I would like to say that global factors, by themselves, change in a very dynamic fashion. This notion is similar to what is being widely discussed in inner China, about restructuring the ‘supply side’. Before, when we mentioned the market, we always considered it from the perspective of demand. Now, this notion has shifted to ‘Supply Side Restructuring’. For us, it means that we must continuously change the factors. That’s the only way we can produce satisfactory effects in favour of the healthy development of industries.

MICE is one of the areas that the government wants to support in order to diversify the economy.

Today, the available official data [2015] declares that this industry has an insignificant weight.

Last year, the total number of meetings, conferences and exhibitions fell 23.1 per cent and all the variables linked to that sector have also dropped [revenues, participants, etc.]. What can be done?

Why conferences, in particular?

According to data from 2015, more than 70 per cent of fairs and exhibitions took place in the same hardware, or were held in the same venue, thus creating a centralised situation when it came to client sharing. With conferences, which may be of different scale, they can be held in different places, so it would help promote a more generalised client sharing and contribute towards reinforcing the activity in those parts of the city.

When we speak of an adequate diversification of the economy, of developing the gaming sector and Macau’s economy, we should take into account all the related measures; but these measures aren’t just those that help distribute clients. On the contrary, they should allow the same clients to be shared by other people.

Allow me to say that the (apparent) drop in the conventions and exhibitions sector results also stems from the fact that the Statistics and Census Bureau has changed its calculation model for that sector. The number grew to 813 events last year, 125 more (than in 2014). There were 88 exhibitions, which was just nine fewer. Indeed, there was a ten per cent decrease in the number of participants, as well as between 3.8 per cent and four per cent fewer exhibitors.

But the government knows that MICE isn’t the solution for economic diversification because it will always represent a miniscule percentage of GDP, just 0.05 per cent in 2015…?

As Secretary, I pay close attention to GDP figures and the drop in gaming revenue, but in this phase of economic readjustment we can see that the unemployment rate has only increased from 1.7 per cent to 1.9 per cent. In other territories, it is believed that chaos would follow a drop of over 30 per cent in their predominant sectors and over 20 per cent in their GDP. But in Macau, our resilience and dynamics persist.

I understand what you’re trying to say, but the (low) unemployment rate is specifically related to the opening of resorts by the gaming industry, as well as excessive demand of manpower in a city that has little to offer. It’s not because of the industrial sector, which has been disappearing.

The difficulty in diversifying the economy is understandable, but we still can’t exactly see where that diversification is, can we?

It’s hard, but we must find a solution and that is a consensual opinion in Macau.

I understand that necessity. What I don’t understand is the apparent unwillingness of Macau to accept that the only real diversification capability is closely related to the two industries where we are really strong: gaming and tourism. We have greatly diversified Macau’s offer in areas that used to be non-existent and that improved immensely due to those industries: shopping malls, food and beverage and even conventions and exhibitions. Why look for diversification in other areas where we are not dominating, rather than reinforcing those areas where we are among the best?

I have to address the specific background of the financial sector. First, the need to promote the unique advantages of Macau and Hong Kong are mentioned several times in the Mainland’s work reports of 2015 and 2016.

The difference between Hong Kong, Macau and the inner regions and provinces of China, in terms of unique advantages, stem from the ‘One country, two systems’ institutional model that both SARs have.

Here, the difference between Macau and Hong Kong is that Macau has the unique connection to Portuguese-speaking countries.

Regarding the financial sector and its articulation with some of the national policies, we have to consider that the country has to invest in certain large equipment in the construction of the ‘One Belt, One Road’ [The Silk Road Economic Belt and the 21st Century Maritime Silk Road] and in the context of projects financed by the Asian Infrastructure Investment Bank [AIIB]. Heavy machinery must be exported for that and we’re trying to see if part of that process can be done in Macau, by adopting the financial leasing model. Macau would only address the application of that model, which doesn’t take a lot of physical space. As Macau becomes a platform for Portuguese-speaking countries to pay for transactions in RMB we already have the basic structures that will allow us, in the future, the capability to participate in the country’s projects; namely, in the export of machinery backed by financial leasing made in Macau. Besides, Macau also provides tax benefits and certain advantages in the free flow of currencies.

Next, other activities will follow, such as registration, insurance, etc., geared towards that specific financial activity or towards supporting the birth of a new and modern services sector.

All of this may provide our younger generations with job opportunities and new professional horizons.

Next year? In five years? When…?

Given a monthly average of 18 billion patacas in gaming revenue from April to the end of the year we’re still looking at a 5.5 per cent drop in revenue compared to 2015. Are you hopeful that a recovery is still possible this year?

So far, based on our estimate, we believe that a positive budget balance is still possible this year, at about 3.4 billion patacas.

As for gaming revenue having stopped falling or growing again, we must look at it from different aspects. First, Macau’s economy is geared towards the outside, and the export of services from the gaming sector is largely dependant upon the economic conditions of the markets where clients come from, but, so far, we haven’t noticed any big changes in those conditions.

When there aren’t big changes, what can be done?

In Macau, that means our clients originate from one area, so we need to develop the non-gaming elements and invest more in order to elevate our competitiveness on the world tourism stage. It’s essential to diversify sources of clients.

In the past, there was a similar phenomenon where gaming revenues came from the same source of clients and were channeled through VIP rooms. Those rooms had fewer people but produced most of the revenue. We must change that situation and look for non-gaming elements that can attract middle class people and families, thus preventing a situation where most of the gaming revenue comes from the same small group of people. This is not my imagination, but real.

Unlike what happened in the VIP sector, we can see how revenue from mass market didn’t drop during the Chinese New Year and Easter holidays, despite global purchasing power from neighbouring regions having declined. Besides, the ration of the VIP market and the mass market has changed from 7:2 to 5.5:4.5 or more. There are also additional F&B venues and hotel rooms for the mass market. The number of croupiers is higher than in the VIP rooms, so it has created more jobs.

After years of the government saying that it wants to diminish the role played by satellite casinos and saying that no more requests would be accepted after 2008, how do you explain the creation of Coloane’s first casino, The XIII?

When I went to the Legislative Assembly (AL) to address the oral request of some of the AL members, I explained that there are no legal dispositions that forbid the existence of a casino in Coloane.