Jacking up your table floor. 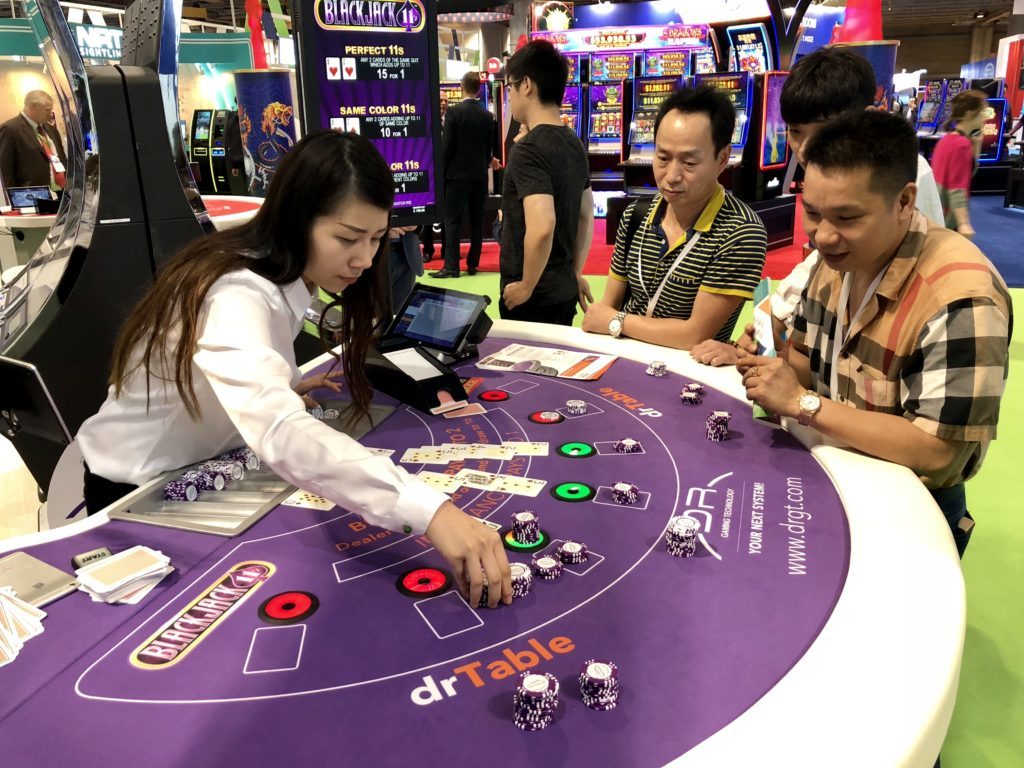 The first slot machine, invented by Charles Fey in San Francisco, dates back to 1887. Many, however, believe that Fey completed the first true slot machine in 1895. By replacing his initial ten cards with five symbols with three reels instead of five drums, the complexity of reading a winning result was significantly reduced, allowing an effective mechanism of automatic payment. The Liberty Bell was so popular that it was copied by many slot machine manufacturers.

Sitman and Pitt of Brooklyn, New York, developed a gambling machine in 1891 which was a precursor to the modern slot machine. It contained five drums holding a total of 50 card faces and was based on poker. Players inserted coins and pulled the lever which turned the drums and the cards they held, while the player hoped for a good poker hand. There was no direct payment mechanism, so a pair of kings might get the player a free beer, whereas a Royal Flush cigars or drinks. The awards were entirely depended on the offers in each local installation.

In 1963, the first fully electromechanical slot machine was developed, including a hopper and automatic payment combinations, up to 500 coins, without the help of an attendant. The first true electronic slot (video slot) was developed in 1976 by Fortune Coin Co., Las Vegas, using a modified 19-inch colour screen and software for all machine functions. The first electronic slot machine with two screens was created in 1994 in Australia.

With regards to tables games, the origins go far further back, though the evolution though is far less pronounced. Baccarat, for example, has some sources claiming that the game was introduced into France from Italy at the end of the 15th century by soldiers returning from the Franco-Italian War. Similarly Blackjack’s precursor: twenty-one, really has an unknown origin, however, the first written reference is found in a book by Spanish author Miguel de Cervantes, most famous for writing Don Quixote. This short story was written between 1601 and 1602, implying that ventiuna was played in Castile since the beginning of the 17th century or earlier. Similarly many historians believe Blaise Pascal introduced a primitive form of roulette in the 17th century too. The roulette mechanism is a hybrid of a gaming wheel invented in 1720, and the Italian game Biribi. The game though has been played in its present form since as early as 1796, with pretty much the only amendments being the use of either one or two zeros.

Notwithstanding the ongoing evolution of slot machines, the challenge facing most casino operators (and suppliers) for probably at least the last 50 years has been how to adapt to player needs and the ongoing change in the definition of what is ‘excitement’ is. The development of slot jackpots have afforded slots managers (and players) the ability to not only rejuvenate their gaming floors, but to drive added interest in their entertainment offering too – in fact at present some operators have as much as 70% of their gaming floor operating with a jackpot in some form or another. This has resulted in an opportunity for businesses to focus solely on the development of jackpots – not cabinets or games, just jackpots. But what about tables– how do we manage a standalone, floor-wide, mystery or wide-area jackpot for tables players, and create the hype and excitement of a slots progressive? Table games, as mentioned above, have a been played in much the same way for centuries, and although tweaks have been made to games in an effort to refresh them, the only real way any designers have been able to accommodate development needs is by creating a side bet ‘outside’ of the game that ensures the accrual of a jackpot, and the development of separate (or integrated) mechanics that don’t slow down the game, but really add to the game’s excitement.

As the saying goes, ‘the only constant is change’, and Wide Area Technology has afforded DR Gaming Technology (DRGT) the ability to develop and provide in excess of 15 different jackpot solutions across not only gaming floors, but gaming estates. The larger the contributing area to any jackpot, the quicker the central pool grows, and the more often in pays, it’s as simple as that.  People also see and hear about other people winning, share in that winning feeling (either directly or indirectly), and those sights and stories in turn drive a secondary level of interest, that’s a given – so what about tables? The extension of DRGT’s world-leading slots jackpot technology to tables was the obvious evolution, and the result of significant research and development is our selection of successful ‘11s’ side-bet jackpot games for both BlackJack and Baccarat.

With a single chip side-bet, players can follow payouts easily, as can dealers. The games are fast, and have almost zero impact on the primary game speed. Payouts are based on the player drawing an 11 with his first two cards dealt, its as simple as that! The various ’11 combinations’ have a configurable pay table, (which is displayed for all to see), and which allows operators the ability to manage volatility and return to player percentages, as well as offer linked Mystery Jackpots between slots and tables. Operated as a standalone side-bet game, operators can also easily switch between our table progressive games and the ongoing standard table game at the touch of a button. Players in turn have the aforementioned excitement of playing a jackpot game, on a specific table, a selection of tables or across an operator’s entire estate, just like a slot wide-area progressive. Our patented serverless solution ensures no risk of downtime, and our drSensor (which is easily integrated into each table) is a casino chip sensor and multicolour game indicator rolled into one; providing lightning-fast, and perfectly synchronised, lighting effects as games are played and jackpots won. The latest development within our Tables Management System is the ability for operators to offer bonus points to loyalty members playing our side-bet game – another step towards aligning, and more importantly integrating,  slots and tables.

BlackJack11s is presently operating across many of Sun International and Peermonts casinos in South Africa, at the Hippodrome in London, Grand Kaz in the Seychelles, Monterey in Mexico, as well as a number of casinos in Belgium and Cyprus.

Good jackpot, and side-bet systems suppliers, manage large estates well, with no or minimal downtime, and offer out of the ordinary systems and operational support. With arguably the world’s largest number of possible jackpot configurations including mystery jackpots and linked progressive jackpots on an extremely stable serverless system, DRGT is perfectly positioned to assist all operators with the implementation of a side-bet solution that will always leverage the best possible technology; in so doing ensuring a cost-effective and user-friendly side-bet jackpot solution that is designed to put the player first; there is simply no bigger drawcard for any gambler, than the opportunity to play for a jackpot that pays often.