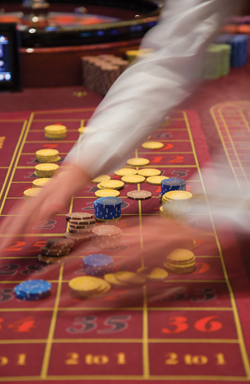 In June, for the first time in five years, Macau casinos suffered a gross revenue decrease (-3.7 percent) to reach 27.215 billion patacas. The slowdown continued and, in July, a further drop of 3.6 percent occurred, for a total of 28.415 billion patacas, when compared to the same period last year.
August follow trend and registered another negative growth y-o-y. And analysts predict the same with September. Still, Macau is doing better overall than last year but growth is no longer a two digits.
According to analysts, the 2014 World Cup seduced players from the tables and directed them towards online betting, while illegal UnionPay debit card transactions contributed to the overall casino revenue drop. Add to this the fact that China’s economy – Macau casinos’ most important source of revenue – is growing at a slower pace. Finally, the effects of China’s central government anti-corruption campaign are washing up in Macau as well.
The June, July and August drops, however, are not a source of concern for analyst Ricardo Siu from the Macau University Centre for Gaming Research. “Macau is a very particular market. The VIP market and the ‘junkets’ dictate the economic growth”, he says, while anticipating that “the gaming industry will maintain a positive growth albeit with just a single digit”. Factors such as the greater transparency of junket operations, the casino smoking ban and greater scrutiny by Mainland China players will lead to a “healthy consolidation and adjustment” of the market.
“Year on year growth has been impressive but it then needs to drop as part of the cycle. There’s a slowing down period, so that certain matters that rapid growth creates, such as the labour disputes, can be taken care of”, Siu posits.
Joey Lao, president of the Macau Association of Economic Sciences, is equally optimistic: “During this phase, Macau’s economy is still performing well and we have a great number of large infrastructure projects in the pipeline, so we can expect economic development for the coming two years”.
Economist and university professor José Duarte agrees: “For the time being, the economy is contracting but we’re still well above the levels of five to ten years ago. We lived through those times, so we should worry but there is no reason for alarm”. In his opinion, “a contracting period, more or less sustained by the gaming revenues will have its consequences but Macau enjoys full employment and boasts one of the planet’s highest ‘per capita’ revenues, so there’s no reason to panic when the first bad news arrives”.

Not putting all the eggs
in one basket
Nevertheless, Duarte underlines the weaknesses: “No-one knows when the largest [item of] infrastructure currently being built – the light railway – will be finished. We can follow that with a bridge but that’s not what economic diversification is about. It’s simply a measure to keep the economy going during a period of contraction by resorting to public investment”.
The economist believes that diversification “hasn’t happened yet, nor will it, by a simple decree”. While trying to identify possible paths – such as gaming related activities or services, or in other areas such as cultural industries or Chinese traditional medicine – he warns that the conditions just don’t exist yet. “We’re thinking of activities aimed at small and medium enterprises, a sector which is currently struggling against high rents and the job market. As long as we don’t provide objective conditions for new companies to appear and for non-gaming related businesses to be created, especially companies that are not subject to the effects of the natural expansion and contraction cycle that the gaming sector feels, the diversification just won’t happen”, he states.
On the other hand, economist Jose Sales Marques feels that, in the first phase, the economic diversification will be “intimately linked with the gaming and tourism industry”, and he goes back in the History of the Macau Special Administrative Region: “Macau’s a very small society and its past was strongly influenced by monopolies, which is a legacy from the 19th Century when the Portuguese ruled the territory”.
According to him, the solution is to open the market, including the importation of foreign labour. He considers that the exclusivity afforded locals when it comes to croupier positions is a “complicated situation” which should remain untouched for the next five years of government. “Why is the Chief Executive so adamant in denying outsiders access to these positions? Probably because the political costs of saying yes would be much higher. There is a contradiction between the social forces that [clamour] for a more open system and what the system itself is able to accept and accommodate”, he says.
Sales Marques also mentions the problem of scaling: “The creative industries are a clear bet by the government and that’s why they have their own fund. Still, even when these projects materialise and fully accomplish their potential we cannot expect them to significantly contribute towards the SAR’s GDP. What is the exact number – 1 percent, 2 percent, 5 percent? – of these industries’ contribution to the economy that would be enough to finally claim economic diversification as a reality?”

Space to grow
Joey Lao’s analysis concludes that Macau is limited “up to its neck” by the lack of land, which is essential for development and to finally reach the sunny uplands of international entertainment and leisure centre. “Diversifying is not enough”, he warns, while mentioning that, for example, there is a real need to facilitate the movement of tourists and non-resident workers on the main border with China (Border Gate).
“Opening the border 24 hours a day is a change that the city must face. If that doesn’t happen, Macau’s ability to receive people will face very serious problems, with additional social costs for residents”, Lao says.
The real estate prices increase has already forced the government to admit that a “bubble” is possible. Add to this the fact that inflation reached 5.99 percent in July. Joey Lao says, “all social problems will remain in the near future: real estate prices are too high and, as economic growth continues, so will inflation because they’re interconnected”.
Albano Martins says that the pataca’s indirect link to the US dollar keeps interest rates at low levels, in line with those in the US, which results in an “overheating of the real estate market, with prices rocketing because credit is accessible and cheap”. Agreeing with his Portuguese colleague, Ricardo Siu also believes that “the government should adopt a proactive policy, intervening more in the market”.
Despite everything, Joey Lao believes that the government will make private residences approval procedures faster and that the 32,000 units (including 28,000 public units) to be built in Zone A of the new land lots will have a positive effect on local demand and supply. “The international economic scenario may also change”, Lao says, anticipating an interest rate increase mid-2015. “We’re a very small economy and, thus, we’re dependent upon others. Whatever happens outside Macau definitely impacts us”, he concludes.