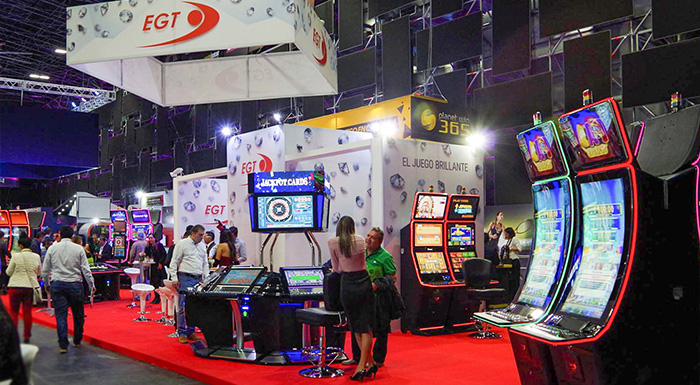 “We are excited about the opportunity to meet with more local operators during the upcoming FADJA Colombia show and to present products that will debut in the country very soon,” said Silviya Marinova, director of EGT-Colombia.

At company’s booth No 53 there will be showcased some of the most prominent slot and multiplayer products of EGT. The P-24/24 Up cabinet has been the bestseller of the manufacturer for many years and in numerous countries. The P-27/27 St Slim, equipped with the 4-level mystery progressive jackpot Lady’s Cards, is also well-known in Latin America. “Both models have been among our highest-performing machines, preferred by the major operators also in Colombia. Their success paved the way for many other products of EGT,” explained Mrs. Marinova.

Recently launched in the country and included also in EGT’s exposition at FADJA is the 4-level mystery-progressive jackpot system Diamond Life. It is housed in the elegant P-24/32H Up, featuring a 24-inch widescreen main monitor with touch screen and a stylish LED-illuminated top box with a 32-inch landscape display.

The mystery-progressive jackpot system of 3 levels 3 Happy Hits will be presented in the P-42V St Curved slot cabinet of EGT. It follows the most modern concepts in contemporary industrial design, having an edge-to-edge front glass surface and offering much more convenience to the players. Its 42-inch vertical touch-screen monitor is not divided to different sections, allowing larger space for the media graphics. The 27-inch multimedia topper for 3D animations, the intelligent ambient LED illumination, responsive to the activated game, and the ensured long-lasting comfort during the play, cannot let the model go unnoticed in every casino floor.

“In 2018 we will be introducing a few new cabinets in Colombia and the Curved models will be among them,” explained Mrs. Marinova. “We have already signed contracts for a number of installations. Their design and modern technologies have gained them popularity in other markets in Latin America, so I look forward to their start in the country.”

A debuting product of EGT during FADJA 2018 will be another jackpot system – the Chinese-themed 4-level progressive jackpot Fu Gui Rong Hua, housed in the visually engaging P-24/32V Up cabinet. Its two games Eternal Lotus and Empress Gold will bring the spirit of Asia, granting the chance to the players to hit more than one of the jackpot levels at a time.

Six STORK terminals, connected to an automated roulette wheel, will add the multiplayer aspect of gaming at EGT’s booth. This model of EGT Multiplayer, a subsidiary company of EGT, has already been installed in several casinos in Colombia, offering a simultaneous play on a roulette and multitude of video slot and card games. It also provides a 4-level mystery jackpot Jackpot Cards. “The STORK model had a strong start in the country, being also suitable for smaller casinos, as it occupies less space and offers everything, desired by the players,” added Mrs. Marinova.

FADJA Colombia 2018 will also be a key event for EGT in terms of online gaming and the VLT market in the country (establishments other than casinos) where the company will also focus during the year.