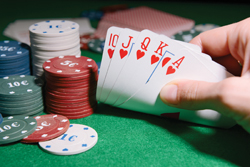 Harrahs Casino and Resort is one of the Atlantic City’s premier gaming destinations. With elegant rooms, a sleek modern feel, and cool design, the resort has become a favorite. But in January, something unexpected happened in those gorgeous hotel rooms that capped a poker mystery that began a few days earlier at another sleek Atlantic City casino, the Borgata. The casino’s poker room is popular for its numerous tournaments throughout the year, and had begun its popular Borgata Winter Poker Open only a few weeks earlier – where controversy ensued when counterfeit chips were introduced into play and set the industry and poker world on alert.

Harrahs guests began complaining about leaky pipes in their rooms, according to reports in the Press of Atlantic City. Plumbers examined sewer pipes in the hotel and found something unexpected that had been flushed down a hotel room toilet – more than $2.7 million in counterfeit poker room chips. This was the beginning of the end for one of the crazier stories in modern tournament poker and had a wider impact on the poker industry.

Law enforcement and casino officials believe Lusardi is alleged to have been involved in cheating in Event No. 1 in the Winter Poker Open by introducing at least 160 of the counterfeit chips into play, a value of 800,000 in tournament chips. The tournament featured a $560 buy-in with 4,814 players for a total prize pool of more than $4 million.
“This is the first time we’ve had anything like this happen in our 10 years in business, and it’s the first time I’ve seen anything like this in my 27 years in gaming,” Borgata Senior Vice President Joe Lupp told the Press at the time.

The result for players? After initially suspending the tournament, play was then cancelled altogether with three tables of 27 players remaining. Investigators believe 2,143 players who did not cash in the top 450 may have been affected by the counterfeit chips and were refunded their buy-in. Those in the final 27 received the remaining cash – $19,323 each. Lusardi was an early leader and cashed for $6,814.

Initially, a few players had noticed some of the fake chips and rumblings began about something being wrong with the tournament. Nick Guagenti, of Columbus, Ohio, has been a mid-stakes grinder for about 11 years, traveling throughout the U.S. about 175 days a year playing cash games and some tournaments.

“It was pretty hectic on the first day. Along with the noon event, we weren’t allowed in the tournament room for hours. While waiting, no one really knew what was happening, but I had a bad feeling,” Guagenti tells Casino International. “When we were finally let in and told of the counterfeit chips and that they were postponing it until the next day there were a lot of different emotions.”

For Guagenti, who is married and has a 1-year-old daughter, the cheating and suspension of the tournament was personal. He was second in chips and the resolution may have cost him thousands of dollars in winnings. Despite this, he realizes there was nothing else the casino and Division of Gaming could do, but believes incident like this go on more in the poker world than most people realize.

“On the first day there were a lot of questions from the players. None were answered as they were beginning their investigation,” he says. “My first reaction was: ‘Yeah, so what. I suspect that a lot of tournaments are compromised from time to time – just not with counterfeit chips.’ On the following day, when we were told that the tournament was to be canceled, there was a lot of anger and disbelief. I was in shock. I’ve been playing a long time and hadn’t been in many spots with that much financial equity.”

SECURITY CONCERNS
Organizing a poker tournament can be a bit of controlled chaos at times. Slipping a high-value counterfeit chip into a tournament may seem easy, but with cameras everywhere most criminals would be deterred. Matt Savage, longtime tournament director and executive tournament director for the World Poker Tour, believes the case in Atlantic City has made the industry take notice and focus on security. He also believes players themselves can be a big part of policing the game as happened at the Borgata.

“Players and tournament staff have become more vigilant and I think that is important. Of course, we all hope it is an isolated incident, but we all know that the fact that he [Lusardi] is being prosecuted is likely a big deterrent for a crime that in the end didn’t even pay off as he had hoped,” he says. “Players must be vigilant. If they see something that does not look right, speak to the tournament director away from the table. They are playing for a lot of money and so they need to look out for themselves also.”

In recent years, many casinos and tournaments have been using Radio Frequency Identification (RFID) in casino chips to track them and identify fakes. Savage believes that while the technology certainly works, it is not always an option for most casinos.

“I think the idea of RFID is not feasible for most casinos and I’m not even sure how well it would work. I’d like to think that the major majority of poker players are out for a fair game and tournament, and hopefully we have seen the last of this type of behavior,” he says. “This could have happened anywhere and so I do not hold Borgata 100 percent responsible and I am happy that there was a resolution.”
Certainly, cheating and thefts at casinos is nothing new. But because the game is played not against the house, but against other casino patrons – a reputation of not hosting a fair game can have far-reaching implications. From 2010-13, reports began surfacing about collusion among players in Deadwood, S.D., and the gaming commission began investigating these reports in 2013.

Douglas Florence, a security consultant and senior vice president of strategic operations of eConnect Global in Las Vegas, says poker wagering in Deadwood dropped significantly and led the gaming commission to pass security measures in an attempt to bring players back to the tables. The new rules ban communicating with electronic devices at the table and speaking languages other than English at the table.

Counterfeiting has always been a problem for casinos, Florence says, and can be particularly problematic because casinos and tours use separate chips so much for tournament play. Slipping a few high-value chips out of play to copy and work back into in a future tournament for possibly a bigger score is not too difficult. While Florence believes team play and collusion are more of a concern to casinos regarding poker, he believes the only way to prevent these types of counterfeit crimes is by using technology including RFID and bar codes. The high-tech tracking ability allows casino officials to easily identify phony chips.
“The only way to make sure they can keep track of all the chips is use RFID and other technology,” Florence says. “The casinos are going to tell you it’s going to cost a lot of money. Well I say bullshit. This is ultimately about the integrity of the game.”

AFTERMATH
Criminal types will always look for an edge or a way to beat any game in which a large amount of cash is awarded. And casino security will never be foolproof. Lusardi had a previous run-in with the law in 2008 when he was one of several men charged with running an illegal gambling operation in Fayetteville, N.C., and one poker site probably spoke for many by labeling the accused criminal as a “miscreant.” Some have argued that if he had not flushed the fake chips, Lusardi may have gotten away with the entire scheme.

In the days after the events at the Borgata, bad news continued in Atlantic City as Atlantic Club, Revel, Trump Plaza, and Showboat casinos all closed their doors. The Trump Taj Mahal was also in danger of closing as of September. Thousands of employees have lost jobs as casino revenue has continued to fall in recent years with increased competition.

In late-February, several players filed a lawsuit against the Borgata alleging fraud and financial negligence. Guagenti believes this is a pointless endeavor and that poker security will always be a challenge. And despite the events at the Borgata, progress has been made in recent decades.

“I believe that security in the poker world is very hard to enforce. I think that for a tournament director the best thing you can do is try as many preventative measures as possible, but realize that people will always be looking for ways to cheat the system,” he says. “We don’t have a governing body or a disciplinary system. So if someone is caught cheating they can just walk right into another casino and do the same thing. I haven’t been around forever, but I would tend to guess that it’s a lot better than it was 20 to 40 years ago.”

The physical, the virtual and the politics – a look at the human capital implications
Baha Marketing