From Wembley to Caesars Palace… 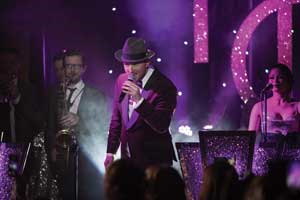 Manchester235’s Matt Goss Experience The casino charged a bargain £75 a ticket for Matt’s 90-minute show, which included a three-course dinner prepared in the James Martin restaurant for the 170-strong audience. Only one table was reserved for the casino’s VIPs, with the rest of the tickets going on open sale. Austin Graham, Venue Director Manchester235, explained why they partook in Matt’s mini-tour: “We really wanted to showcase our industry links which are quite unique and authentic with Las Vegas and Caesars Palace. We wanted to, frankly, bring a touch of Las Vegas to Manchester and for us, there was no better way when we found out that Matt was over in the UK. We did a press release as the announcement for the night, and the phone calls started coming in very quickly. “Our capacity is much greater than we actually used on the night because we made it a dinner and show experience, so we took up a lot of space in the bar area because we put in large tables. “We put out 100 tickets initially then released more because of demand. They went in about 45 minutes, the phones were red-hot.”

ALEA Nottingham casino’s Matt Goss Experience A much-boosted presence on TripAdvisor is one of the benefits ALEA Notingham saw from Matt’s visit. Venue Director Mark Hands explained how his team marketed the event: “We didn’t particularly publicise or market this differently, at Nottingham we are good on our social media channels and we allowed those channels to do what they do best, which is to bring the news out to the right people. Age-wise, demographically we anticipated it was going to hit people 35+ and that sits alongside our Facebook and Twitter followers well. It’s one of our key customer bases and as soon as we announced it, what I expected to happen did; it really took off.” So what was the impact on their guests? “It meant a lot to our customers and the feedback was fantastic. If you look at our TripAdvisor page you will see we have gone from ninth as an activity to do in Nottingham to fifth, and most of that is due to the feedback we got from the Matt Goss event.” With British casinos being much smaller overall than their Vegas counterparts, choosing the right room was vital, as Mark elaborates: “When we looked at the rooms we had available, we opted for our Face To Face room even though it seated fewer customers as it worked best for the kind of intimate show Matt does; we ran the event almost as a loss leader to get the positive PR and kudos we wanted to achieve. We charged an amount we thought was sensible and affordable, and went out at £75 a ticket in a 96-capacity room and had a very small, select crowd that allowed Matt to shine as the performer he is. The ticket price included a three-course dinner too, which gave our chef a chance to shine and do something really special for the customers. “Of the 96 people in the room, we probably sold about 40 tickets. The rest were either gaming VIPs or local VIPs that we are presently working with, or aspire to be working with in future. The only caveat we put on it for the gaming VIPs was they needed to have an interest in Matt and what he was doing, rather than just opening it up to anyone.” Matt is a polished Las Vegas performer and there is clearly public demand for that kind of offering, especially with casinos willing to make it a good value proposition for customers; will this affect the way ALEA Nottingham approaches future events? Mark says yes, absolutely: “It really differed from what we normally do. We make decisions based on a return on investment and that is based on monetary value; on this, the ROI was based on kudos and enforcing the Caesars brand in our local environment, and the PR and goodwill we would gain. It was one of the highlights of my career having the event here. “What’s the legacy of the event? It showed we can do more. We have already changed the business to be more of an entertainment venue than just a casino, this has just helped us further on that journey.”