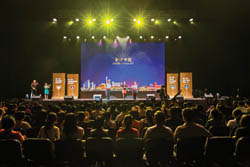 Lawrence Ho is the first gaming industry hotshot to gamble on establishing a presence in Vladivostock.

The Primorye integrated entertainment zone, near the far eastern Russian city of Vladivostok, has just landed its first big investor: Lawrence Ho Yau Lung. Two Hong Kong-listed companies controlled by Mr Ho, Melco International Development Ltd and Summit Ascent Holdings Ltd, announced recently they will spend US$10 million (MOP80 million) to buy 51 percent of a company building a casino-hotel in the zone.
Gaming industry analysts say that if Mr Ho’s venture is successful, it could pave the way for other big gaming companies in this part of the world to enter Vladivostok.
Melco International is one of the two biggest shareholders in Melco Crown Entertainment Ltd, owner of City of Dreams in Macau. Mr Ho’s partner in the new venture is Elegant City Group Ltd, owned by Russian businessman Oleg Drozdov, which has no casino experience.
Gaming Market Advisors LLC has provided consultancy to OJSC Nash Dom – Primorye, the Russian state-owned company that manages the Primorye zone. Gaming Market Advisors principal Steve Gallaway says Mr Ho’s project can break a passage through the business ice that surrounds Primorye.
“Assuming the Ho development is able to continue to move forward, I suspect others will follow him,” Mr Gallaway says.
He says Mr Ho is the only investor from Macau to show much interest in Primorye.
“There weren’t any other Macau operators sniffing around there. I believe Galaxy Entertainment Group Ltd was there once, years ago, but I don’t believe they were ever very interested.”

NagaCorp Ltd, which runs the biggest casino in Cambodia, and Global Gaming Asset Management LLC of Las Vegas, an investor in Manila’s Solaire Resort and Casino, have expressed an interest in Primorye. Both submitted ideas for the first phase of the development. OJSC Nash Dom – Primorye announced in December that it would open negotiations with these companies.
“They have been sniffing around Vladivostok for a long time. To me, one of those would be the logical next one to step up to the plate,” Mr Gallaway says. Malaysia’s Genting Group has also shown interest but “to a lesser extent”.
He says no other big gaming companies have committed likely because of the risks of doing business in Russia. So they will watch closely to see how Mr Ho’s project fares.
“The Primorye government needs to realise that they need this deal to work more than Mr Ho does,” Mr Gallaway says. He forecasts that Primorye will eventually have up to six resorts, developed in phases.
The Primorye zone is in a mountainous area on the Sea of Japan, 50 km from Vladivostok and about 25 km from the city’s new international airport. It is not far from Russia’s borders with China and North Korea.
Macomber International Inc has done some consulting work on the Russian gaming industry and its head, Dean Macomber, says other Macau gaming companies may follow Mr Ho’s lead. Mr Macomber says gaming companies here should expand across East Asia not only to increase their earnings but also to develop “brand equity across a broader marketplace”. Expansion would fend off competitors in shared feeder markets.
Other Macau gaming companies may have passed up the opportunity Primorye offers because “some just do not believe it to be an opportunity, or an opportunity that surpasses the ones they already have in Macau and elsewhere”, Mr Macomber says. They may also be “less comfortable” doing business in Russia because they lack knowledge of the language, culture and business practices, and so will be unable to supervise operations there so closely, he says.

Mr Macomber says Mr Ho is taking risks in entering the Russian market. Mr Ho faces regulatory and legal hurdles, and hurdles in building relationships with officials. But the same could have been said about anybody entering the Macau or Singapore markets when they first opened up, he says. “There are many companies that chose not to pursue licences in Macau and rue the day they chose not to.”
At least Mr Ho has a Russian partner, Elegant City. Mr Gallaway says a local partner is crucial to the success of any venture in Russia. He says Russia is still new to outside investors and “still operates on its own set of rules”. A Russian partner better understands the nuts and bolts of doing business in its own country, he says.
Mr Gallaway says Elegant City’s lack of casino experience is “irrelevant”. What is important, he says, is that Elegant City is a developer. “It is nice to have a partner who is in the construction business, as now you can get the project built.”
The Primorye project will cost US$130 million, a fraction of the cost of a project in Macau. The first phase is due to open in September next year. The casino will have 800 slot machines, 25 VIP gaming tables and 40 mass-market tables. The hotel will have 119 rooms.
Mr Ho and his Russian associates have also signed a memorandum of understanding that they will become equal partners in a second project in Primorye. An estimated outlay of US$500 million will create a casino resort with 100 VIP gaming tables, 70 mass-market tables, 500 slot machines, 500 hotel rooms, and entertainment and conference facilities.
Russian news agency RIA Novosti reported last month that Mr Ho’s companies and the Primorye regional government had agreed on finance for the project. The parties are scheduled to sign a preliminary deal next month.

Mr Ho’s companies will be in charge of the gaming side of the Primorye business and their Russian partner “shall be responsible for real estate and construction matters as well as maintaining relations with federal and regional government officials in Russia”, Melco International told the Hong Kong Stock Exchange.
“It is also expected that the project will have a first-mover advantage, as the proposed casino resort will most likely be the first legal casino to start operating in the far eastern region of Russia.”
Melco International described the tax environment in Russia as “very favourable”. The authorities will reportedly levy no tax on gross gaming revenue in the Primorye zone, instead levying only ordinary company taxes and taxing casinos at a fixed monthly rate of US$3,500 a table and US$225 a slot machine.
The company said the casino hotel would have the advantage of being close to the northeastern provinces of Heilongjiang, Jilin and Liaoning. Macau gets most of its gamblers from Guangdong and the southernmost provinces.
Analysts say Primorye, despite its proximity to China, poses no threat to Macau’s gaming industry.
“Some investors have opined that the Russian territory could be competitive with Macau,” says Sterne Agee analyst David Bain. “Given Macau’s large-scale casino offerings, culture, language, critical mass, proximity to main feeder markets etcetera, we find this to be more than a stretch.”
Mr Gallaway says Macau has “superior access” to mainland gamblers.
The Primorye zone aims to attract tourists from the mainland, South Korea, Japan and the United States. Vladivostok is about two hours away by plane from Seoul and Tokyo. Mr Macomber says Primorye will help develop feeder markets in that part of Asia, where the closest big casinos are in South Korea, and just one is open to South Korean gamblers.
The Primorye zone will be part of a cluster of attractions that is expected to draw in up to 12 million tourists a year and will have amenities for activities other than gaming. A report prepared by Gaming Market Advisors for the regional government last year forecasts that gaming revenue will reach US$5.2 billion a year within a decade.
Casinos and other gaming establishments are allowed in only four areas of Russia: the Primorye zone, Kaliningrad on the Baltic Sea, Altai in southern Siberia and Krasnodar near the Sea of Azov. Unlike some Asian countries, Russia allows its own people to gamble in its casinos.
OJSC Nash Dom – Primorye deputy general director Marina Lomakina declined to talk to Macau Business about Mr Ho’s venture.