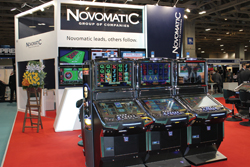 The 2012 edition of G2E Asia proved to be an excellent show. The booths of the major manufacturers were busy throughout as representatives of new and projected operations throughout the region sought out the attractions that would add value to their gaming floors. And the Novomatic booth (number 537) had much to appeal to these show visitors, with a special array of highly market specific as well as international products and a team ready to welcome visitors to the thrilling Novomatic world of gaming.
The brand new Super-V+ Gaminator III cabinet was presented at G2EA as part of the Asian-themed Rise Of The Dragon jackpot installation that featured a selection of the latest single games: Garden of Fortune, Golden Scarabs, Gorilla and Wild Alaska. Extra wide screens for an in-depth gaming experience, elegant style and top quality design present this cabinet an attractive highlight on every casino floor.
A casino promotion special was the Novomatic Reel Tournament that offers a competitive gaming edge and an exciting marketing tool for any slot floor by providing the extra thrill of tournaments in real time. The Novomatic Reel Tournament display in Macau was connected to a bank of Super-V+ Gaminator III machines featuring the special tournament multi-game mix T1.
The Novostar slant top has become an international ‘definitely must have’ product and now features prominently on Asia’s gaming floors. Available in three different modular versions, with either single, twin or triple monitors, the Novostar SL caters to the entire range of modern gaming applications. At G2A the Novomatic booth featured a bank of Novostar SL2 highlighting a wide variety of game specials: the market-specific Asian Super-V+ Gaminator mix A2, a selection of the latest single games and also the new Premium-V+ Gaminator multi-game mix comprising a total of 41 games that are presented to the guest in five colour-coded logical categories for easy game recognition and guest orientation.
Another area of the booth was dedicated to the extensive range of Novomatic electronic live games. On a bank of Novostar SL1 slant top terminals visitors were able to see and try for themselves the great choice of fully animated virtual versions of Black Jack, Baccarat, Bingo, Poker3, Caribbean Poker, Poker 3, Texas Hold’em Poker and Sic Bo as well as Novo Multi-Roulette and a selection of slot games, all available on each of the connected player terminals. The controversy in the exhibition hall and involving a local company and other equipment manufacturers did not in any way involve the Novomatic products on display and so booth visitors could, and did, evaluate the presented products uninterrupted.
Completing the Novomatic booth display was Octavian’s modular and highly ‘tuneable’ casino management system ACP (Accounting Control Progressives System). The system’s ‘add-on’ functionality includes profit calculation, TITO, Cashless and Player Loyalty has already proved itself to be an extremely attractive ‘package solution’ in many international markets and attracted considerable interest at G2EA also.

Novomatic were ably assisted at G2EA by Joe Pisano, CEO of Jade Entertainment and Gaming Technologies, the official representative for Novomatic in the Philippines and Macau.

Casino International: How has your company’s relationship with Novomatic progressed?
JP: Very well indeed. I think I can best describe Jade’s relationship with Novomatic as having progressed ‘step-by-step’. Our companies are also very comfortable with each other. One reason for that is we both have a core principle of duality; meaning that we are both involved as equipment suppliers and we are both also involved in operations. We operate the Oxford Princess and Casablanca properties at the former Clark Air Force Base, some 60 kilometres northwest of Manila.

CI: How did the relationship with Novomatic come about?
JP: We actually first met at G2EA and started a dialogue that led to us being appointed as Novomatic’s official representative for Philippines just over two years ago. Since then we have opened our subsidiary branch in Macau and, most recently, we have been following up on opportunities in other countries.

CI: So those are the next growth markets in Asia?
JP: Absolutely. The whole region has seen the success of Macau and Singapore, so now they want the same. The Philippines, via the coming to reality of the Entertainment City complex in Manila, will be the next really big market and then others will follow.

CI: Novomatic has been present in Asia for some time now, how are the company’s products being accepted?
JP: I have always felt that Novomatic’s step by step approach is correct. The relationships are in place and the product has been universally well accepted. In the Philippines, for example, Novomatic products are consistently in the top three performers and, to quote one specific example, the NovoStar SL slant tops are without doubt the number one performer in their category.

CI: Finally, if you could send a message to every licensed casino operator in Asia, what would it be?
JP: Novomatic is coming. We have the products and the service backup and Novomatic will deliver the performance that your needs!