Galaxy Macau Phase II and Broadway Macau have officially opened their doors to the public. The vice-president of the operator, Galaxy Entertainment Limited (GEG), Francis Lui Yiu-tung, remarked that the number of gaming tables that the company had received from the government “could be a bit higher” despite it being “acceptable”.

The new HK$43-billion (US$5.34 billion) phase, which is the first new casino project that has opened in the territory since 2012 and doubles Galaxy’s footprint in the city to 1.1 million square metres, has been recently granted 150 new gaming tables by the government.

“If you ask me whether the 150 gaming tables is a satisfying number for us, as I said, I think it could be a bit higher. However, given the current situation in the market, I think the number of 150 gaming tables is also acceptable,” the vice-chairman told reporters at a press conference at the opening yesterday.

Although the second phase of Galaxy is designed to accommodate a total of 500 gaming tables, Mr. Lui said that the number of gaming tables is not the clincher deciding a company’s business and profit.

“The market is very different to ten years ago. We don’t think a high number of gaming tables can ensure you make the best business or earn the most. I think that, along with the change in the market, how to make good use of these gaming tables is the most important thing,” Mr. Lui remarked.

Of the 150 new tables of Galaxy Phase II, some 40 have been allocated to its two self-managed VIP rooms while the remaining 110 have been placed on the mass gaming floor. In addition, the operator will move some of its gaming tables from Star World and Galaxy Phase I to the new phase.

“We only have two-self managed VIP rooms. As such, you can see that our focus is on the mass market. We think that this is our new market, and our new normal,” Mr. Lui said on the sidelines of a press conference.

During the meeting with journalists, the Chief Financial Officer of GEG, Robert Drake, predicted that the opening of the new phase will boost the occupancy rate of the hotels in Galaxy from the 95 per cent of the first quarter to 99 per cent in the second quarter. 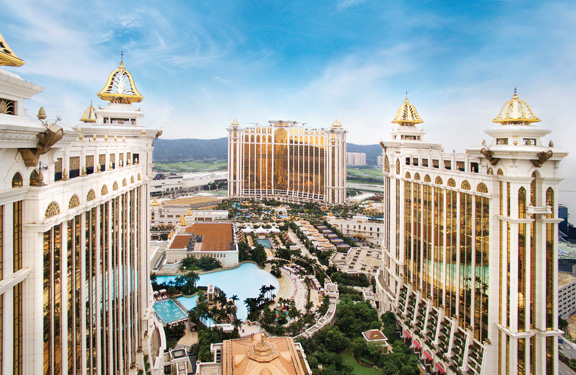 “I think that the results of non-gaming elements, whether they will occupy 50 per cent of the total revenues like [Las Vegas], will only be apparent in two or three years. We hope to reach that,” he said.

“That’s why we divided our project into four phases. We discussed whether we should develop the big plot of land at one time. However, we think that dividing it into phases to develop can sustain our competitiveness as we can follow clients’ changes in interests,” the vice-chairman claimed.

In addition to the direct VIP club, Jinmen, three junkets started operations, namely Tak Chun, Suncity and AG, which transferred from Phase I.

To prepare for a potential universal smoking ban in casinos proposed by Secretary for Social Affairs and Culture Alexis Tam Chon Weng, VIP rooms in Phase II are connected to the balcony for smoking outdoors, while the mass floor have smoking lounges built in.

To enhance the premium players’ experience, Sky 88, with around 20 tables, is being introduced for the Diamond tier GEG Privilege Club top tier customers, while Horizon is exclusively for Black card members which is the second top tier.

Meanwhile, Broadway Macau opened with 38 mass tables and 95 gaming machines; 10 tables will serve premium-mass, while the rest are for the mass market. One key attraction is a large window that allows more natural light for the Broadway casino.

Being the first of the new ‘Cotai 2.0’ wave of properties scheduled to open in the next few years, GEG sees the timing to its advantage as it believes the market has not yet been fully penetrated and it remains optimistic about the long-term prospects of Macau, as well as its own integrated properties set to diversify the offerings, in which gaming will become an extension.

“As a key destination in Macau, what’s important for us is that we draw sufficient volume visitors to our property. We give [visitors] diversity in terms of experiences and products. And with that as an extension of our property, there is the gaming element,” said Kevin Clayton, Chief Marketing Officer of GEG. “We can’t be just focused on gaming. We have to think first and foremost about creating a world-class destination in the context of leisure and entertainment. The gaming to a certain degree will take care of itself.”

The regional competition from the Philippines, Cambodia, South Korea and various nearby destinations is heating up, serving as a challenge. But GEG stressed strong confidence in its product as well as in the city even before being positioned in the global market.

With a 3,000-seat theatre and a line-up of concerts and shows already scheduled up to August, Broadway Macau has also introduced many traditional local brands that not only support local small and medium-sized enterprises but preserve the tradition of Macau.

“It’s truly distinctive as a product and experience. Macau people should be proud of it because it’s built with them in mind as well as in the context of illustrating what’s the best of Macau,” said Mr. Clayton.