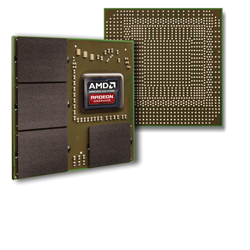 Game performance is about a number of factors, not least of which are the operating system and chip set that runs the gaming machine. The higher-spec the device, the sexier the game experience, in theory. Traditionally, a motherboard within a slot machine would encompass a graphics chip plus a CPU. The new AMD product, however, combines the two in a single chipset, saving on power and heat output and optimizing performance by up to 66%. That’s a huge number when it comes to processing – and this little beauty can also support up to four independent monitors. It packs a lot of punch into its architecture, as Kevin Tanguay and Kamal Khouri, Directors for AMD’s Embedded Solutions, explained to CI.

Casino International: What’s the product for casinos?
Kevin Tanguay [KT]: We’re taking codename ‘Bald Eagle’ to the casino market. This is basically a second-generation R-Series APU which delivers breakthrough graphics performance and power efficiency. This will call out to developers who want to create immersive HD multimedia experiences for players.
It harnesses the processing power of the Steamroller CPU core with a new graphics core based on the AMD Radeon HD 9000 platform, so it is a combined CPU and GPU. It delivers outstanding system performance, superior battery live and can unlock huge potential in things like signage, for example; this APU enables really beautiful 3D, 4K and HD video content, and can also support up to four independent displays. AMD Eyefinity technology means the R-Series APUs can drive multiple displays simultaneously as a single large surface. We really believe this APU is a game changer in more ways that one.
It probably has greater performance than 95% of machines on a standard gaming floor, by itself. We are bringing an immense amount of visual experience in a single-chip solution.

CI: That sounds like a lot of performance…
KT: There is also a companion device that brings expandability and performance, it brings flexibility and scalability. It is a discrete GPU that works alongside the second generation R-Series. From the APU you can run four independent displays as we mentioned, but with this add-on, you can run up to nine independent displays. It works almost like a turbocharger!

CI: Was this developed with the gaming market in mind?
KK: This was developed with gaming, digital signage, medical imaging and the industrial market in mind. If you look at these four sectors you will see an evolution into a very visual field, as well as some basic, underlying things that are very similar. There is always an exchange of data between user and device, so there are security issues to consider.

CI: Kevin, you’ve been observing the gaming market for a few years… What impressions do you have of the industry and what specific needs does this chipset address?
KT: What I found is there are growth pockets in the market as new countries come online. These machines last a long time; operators don’t want to replace a machine if it’s making money, to get new sales you have to replace existing machines, so you have to do something different. If you have a machine that makes $1000 a day, to replace it you want something that makes $2000 a day. How do you do that? First you try and attract the player to the machine. Toppers can be one screen, two screens, even three or four. Then when you sit down it’s about the experience. Who has the money to gamble? The newer players are used to the videogame experience, so game developers have become increasingly sophisticated. That’s part of how revenue is now earned, you’re turning expensive games over by bringing a better gaming experience, to grab players and sit them down for longer. As they do that, they’re making more demands on the chips inside the slots, on us. Developers are asking us for help to make better games.

Kamal Khouri [KK]: “We’ve been attending trade shows for a few years but we exhibited at G2E Asia because the company has restructured; under our new CEO and transformed from taking 95% of its revenue from PCs and servers, traditional markets. The other five percent was coming from casino gaming, and other non-PC/server applications. We looked at the potential growth in non-PC/server applications (including casino gaming), and saw that was where we might see up to 50% of our revenue in future.
“Embedded gaming is any gaming that is not in a PC. The wayfinders in the Venetian Macau are an example of embedded computing in a gaming environment, where the user cannot access the operating system.”

KT: A few years ago everything was mechanical on the casino floor – now it is touchscreens, it’s visual, it’s all connected across the floor and across casinos. You can easily see why a processor design company is interested in it as a market.

CI: Who are you working with?
KT: We are working with a lot of ODMs and several slot machine manufacturers, such as IGT. We are talking to everybody at some level.
There are many stages to building a system – we provide a chip, somebody puts that chip on a board [Quixant, for example]. You might find that Quixant box in a slot machine, the slot manufacturer will develop the content of a game, get it certified, make sure the odds and probability are correct… There are a lot of layers to making a slot product.

KK: One of the unusual things about AMD is our engagement with independent software vendors (ISVs), the guys that develop games. We have been working with Rad Games and their Bink product, for example, for this sector. It’s about making a gaming experience; when you do embedded, you have to control temperature, the gaming cabinet is a harsh environment. We deliver low-power product for this, we work hard toward its longevity.
With consumer product, it’s often assumed that creating something that has a lifespan of around 12 to 18 months is the done thing so there is a replacement cycle. With embedded gaming, our product is in a box, it is tested thoroughly, it is running in place 24/7, you cannot afford to go out there and change it every two years, or where you have to send someone to fix that box. We provide our products for ten years, basically. Think of it as the engine in a Ford – that engine is built for ten years, they can change how the car looks, the doors, whatever, but the engine remains the same.
Investing above and beyond that, you can have the same product in production and really develop your products because you know what the engine can do, so we are investing in the developer’s ability to make better and better games moving forward.
We have always been a leader in 3D graphics and display as a company; we have driven PC and even console gaming to new levels with our technology. What we are seeing is a couple of things. First, the generation that grew up with PC/console gaming and that 3D experience, want more. That is the new generation of workforce. The kids that have grown up with touchpads are now in the workplace – they don’t want to see a little boring screen with a blinking cursor, big buttons and big lights. They are expecting a different experience. This is what we are bringing – a 3D graphic, immersive experience.
We believe there is going to be greater productivity in the world as the relationship between human and machine evolves, as we move away from smaller screens and keyboard interfaces to large touchscreens that help us do our jobs more quickly, more simply and quicker.
Our success is going to be when that machine disappears and you don’t even know there is a computer, it might be embedded into a wall and you’re interacting with your house, your desk and it’s very natural. That’s the big vision and there are small steps towards that. You start with games in the casino becoming more interactive – you walk up to the cabinet and instead of putting in your player card, it recognises your face and logs you in. “Hi Mr Khouri, you have a free meal at the buffet…” Maybe it recognises a frown and plays you a joke, it’s an intelligent interaction. That’s the vision.