Gaming Laboratories International’s (GLI) President/CEO James Maida has been a supporter of Oklahoma Indian gaming for more than 20 years, and now the Oklahoma Indian Gaming Association has honored Maida as a recipient of the organization’s prestigious Modern Day Warrior Award.

“I am honored to be named a Modern Day Warrior by the Oklahoma Indian Gaming Association,” Maida said. “Working in the Oklahoma gaming industry over the last 20 years has been my absolute privilege, and I am humbled to get this award from this incredible group of people.” 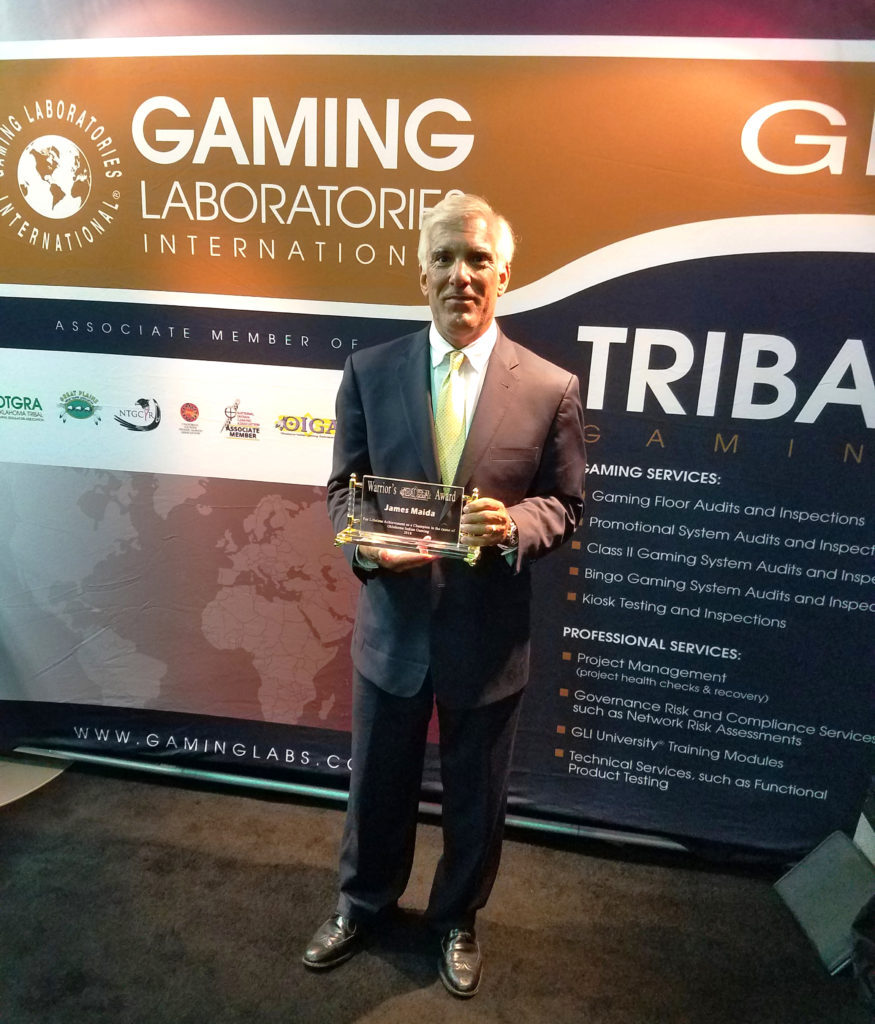 Maida’s involvement with Oklahoma Tribes dates back to the beginning of tribal gaming in the state. Maida served as a fact witness in multiple cases in Oklahoma’s pre-compact era, such as the landmark Seneca-Cayuga Tribe of Oklahoma et al v. the National Indian Gaming Commission et aland cases involving Mega Mania, Lucky Tab II Pull-Tab Game, Tab Force, and Wild Ball Bingo. These cases set the stage for gaming in Oklahoma as it is known today, and Maida’s testimony, along with many others, was critical to the proceedings.

GLI was involved with both parties in helping negotiate their initial compacts and the language adopted by referendum by the voters of Oklahoma. GLI has been doing testing for Oklahoma Tribes since 2004, and the company has issued more than 66,500 certifications, helping Tribes ensure compliance and protect their investments.

Sheila Morago, Executive Director, Oklahoma Indian Gaming Association, said, “The Modern Day Warrior Award is the highest honor OIGA bestows upon individuals who have dedicated tireless effort and support to champion the cause of Oklahoma Tribal Gaming. James Maida has been on the front line of defense for the rights and sovereignty of the nations that comprise the Indian Gaming Industry, and we are pleased to honor him for his dedication and leadership.”

Mike McBride III, Chair of the Indian Law & Gaming Practice Group at Crowe & Dunlevy, added, “James Maida has been at the forefront of gaming technology and regulation. He is a modern-day gaming pioneer. In Indian gaming he has helped fight to protect ‘maximum flexibility’ with the emergence of new technology for Class II gaming under the Indian Gaming Regulatory Act. He has led and helped to craft a stable regulatory regime that has allowed Indian gaming to flourish across the country.”

GLI will be in booth #1015 at the OIGA trade show discussing its many tribal-focused products and services. The company has been testing Class II gaming products since 1989, longer than any other test lab, is a longtime OIGA supporter, and has been an Associate Member of NIGA since 1999.

Leading GLI’s presence at OIGA is Senior Client Services Representative Blaine Preston. Preston, who is a member of the Cherokee Nation in Oklahoma, brings more than 15 years of professional experience in regulatory technical compliance, risk management, and security operations to GLI’s clients.

GLI experts will lend their insights to three panels during the show. First, Vice President of Government Affairs and General Counsel Kevin P. Mullally will moderate a timely sports-betting panel titled “The Post-PASPA Era Begins.” Then Vice President of Global Marketing Christie Eickelman is co-presenting with the President and Chair of Global Gaming Women on the subject “Essential Skills for Workplace Success.” Last, Compliance Manager Peter Wolff is participating on the panel “Ball and Dice – What You Need to Know!” which will cover the legal, regulatory, and electronic rules pertaining to Craps and Roulette.