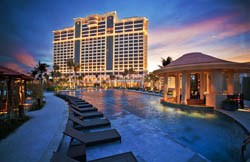 On an enticing beachfront cooled by sea breezes, The Grand – Ho Tram Strip delivers as Vietnam’s first integrated resort. Opened last July, the US$500-million (MOP4 billion) hotel tower designed by Paul Steelman has 541 generous five-star rooms and attentive service. The Bluffs, a golf course on sand dunes designed by Greg Norman, presents stunning sea views. VIP areas pamper guests in décor ranging from 1930s Shanghai to modern Japan. From kitchen-cured smoked salmon to thick pork chops from Vietnam’s highlands, its restaurants satisfy.
“Well over 95 percent of every single group we’ve brought in, whether we’ve sold to them or not, talk about how our product is on par or better than most casinos around the world,” The Grand’s president and chief operating officer Michael Santangelo says.
But over 95 percent of Vietnam’s 90 million population is forbidden by the government from playing in The Grand’s casino, though they are free to enjoy other facilities, at room rates from US$138 (MOP1,104). Gaming is only allowed for foreign passport holders, and for a casino resort located more than two hours from an international airport, that creates doubt about current and future prospects.
“It is likely that the property continues to struggle,” Union Gaming Research Macau Ltd managing partner Grant Govertsen says.
“It is challenged from many perspectives, including, but not limited to: the inability to allow locals to gamble; that it is significantly less convenient to access than just about any other regional casino – but especially [those in] Macau; that it is a single casino and doesn’t enjoy the critical mass that draws customers; that the property opened without a traditional database of players from which to market.”
Mr Govertsen, who visited the property last year, adds: “Ho Tram is truly a world-class large integrated resort that physically compares favourably to resorts in Las Vegas and Macau.”
Asian Coast Development (Canada) Ltd owns and operates The Grand through wholly-owned Vietnamese subsidiary Ho Tram Project Co Ltd. Asian Coast Development also serves as master developer for Ho Tram Strip, a site covering 164 hectares along 2.2 kilometres of beachfront about two hours south of Ho Chi Minh City in southern Vietnam. Full build-out of the US$4 billion project will include up to five integrated resorts with a total of 9,000 five-star rooms, 180 tables and 2,000 gaming machines in two casinos.

MGM Resorts International signed to manage The Grand but pulled out in March 2013 as opening awaited government amendments to the project’s investment certificate, essentially its licence. After The Grand received official approval in April, Asian Coast Development placed chief executive Lloyd Nathan on administrative leave, relieving him of all duties. Mr Nathan, a long time MGM Resorts International executive who joined the project in 2010, is suing Asian Coast Development, majority owner Harbinger Capital Partners LLC and minority partner Pinnacle Entertainment Inc, claiming he has been deprived of millions of dollars in incentives.
“We had an interesting start,” Ho Tram Project general director Colin Pine says. “We thought we’d have the MGM distribution and drawing power. That fell apart very close to opening, so we’re still finding our feet.”
As a private company, Asian Coast Development doesn’t publish results. One number it shares is hotel occupancy, 45 percent for the first two months of this year, including the Vietnamese Lunar New Year period known as Tet. Occupancy reaches 90 percent on weekends with about 1,000 guests, and then languishes in the teens on weekdays.
“Weekdays are a challenge at the moment,” The Grand’s vice president for hospitality John Webb admits. Management hopes its fledgling meeting and convention business, and guests lengthening weekend stays will lift occupancy. Mr Webb says 45 percent beats occupancy at Vietnam’s other east coast resorts at a similar juncture.
“There are not a whole lot of casino resorts that can boast the real resort attributes that we have,” he says. “If you took the casino away, you’d have a resort.”

On the gaming side, The Grand focuses on high rollers, with 55 of its 90 tables in its VIP area. Play is denominated in U.S. dollars. The property relies on junket promoters that it calls “independent tour operators”, to bring nearly all of its VIP players.
Mr Santangelo says most of these junkets operate at the agent or sub-agent level for Macau promoters. The biggest group of players come from mainland China followed by overseas Vietnamese, either living abroad or returned. Depositing US$5,000 earns VIP status, and the property grants “payment terms” – credit – to vetted players.
Dedicated VIP rooms are assigned to junket operators for Japanese, overseas Vietnamese and Korean punters. The VIP area can change configurations to accommodate casual junkets and The Grand’s direct VIPs, presently less than 10 percent of the roll.
“Our business thesis is that there’s an imbalance between supply and demand in Asia,” Mr Pine says. “For a [junket] without capability to lock into specific rooms in Macau, there is a desire to find luxurious facilities for players who have the capability to play at the mass premium or lower end of the VIP spectrum, and don’t get the level of service they’d want in Macau,” he says. “We can fill a niche here.”
The Grand’s nominal gaming tax rate is 30 percent, but with deductions for promotional expenses, the effective rate falls to below 20 percent overall and to the “low teens” for VIP play, Mr Pine says. Vietnam imposes a 10-percent withholding tax on large winnings, but The Grand has negotiated a “deemed approach”, paying a fraction of a percent on all cash outs in lieu of withholding.
Low taxes facilitate the payment of higher commissions, called “discount on stipulated currency”, to junket operators. Management won’t reveal specific rates but says they’re well above Macau’s 1.25 percent of rolling chip turnover, and “competitive” with other Southeast Asian jurisdictions, which can exceed 1.6 percent.
“This place will never be Macau, but that’s not what we’re trying to be. We’re trying to be a gaming resort where people can enjoy the physical asset and have some places where they can relax,” says Mr Santangelo, a former Las Vegas Sands Corp executive. “That and the fact that we can pay [junkets] a higher discount on stipulated currency,” he adds, with a laugh.

To build visitor traffic, The Grand is moving on multiple fronts. Recently it opened a sales office in Macau. But management is most excited about the debut of The Bluffs, its golf course, which opened for preview play last month. Management hopes to stage a grand opening later this year. Mr Santangelo expects the course to particularly attract Japanese and Korean players.
“It should have a modestly positive impact and could drive some incremental VIP visitation,” Union Gaming’s Mr Govertsen says of The Bluffs. “However, golf has never been a key driver of VIP play in Asia.”
Road improvements have cut travel time to Ho Tram from downtown Ho Chi Minh City, Vietnam’s commercial capital, to less than two hours. Completion of a new expressway will reduce travel time further.
A proposed new Ho Chi Minh City international airport at Long Thanh is one hour from Ho Tram. Mr Pine is sanguine about that prospect, but the government has yet to make a final decision, and completion would be years away.
A government decree formalising regulation of casinos is likely this year, following last year’s decree on slot clubs. Asian Coast Development has been discussing the regulations with legislators and Ministry of Finance officials. “The decree will be a very positive development,” Mr Pine says, noting that a lack of a robust regulatory framework was among the reasons for MGM Resorts International’s exit. “It will provide clarity and comfort, and it will formalise barriers to entry.”
Before worrying about possible competitors, Asian Coast Development still has four and a half more resorts to build at Ho Tram. Piling for The Grand’s second tower is finished, but no date for further construction has been set. The 559-room tower could be completed in a year.
“We believe the company needs to raise financing for the second tower, and we’re unclear on the status of that raise,” Mr Govertsen says. “Given that locals can’t play, and that the property is therefore forced to be VIP-centric, it might make sense that some VIP operators could kick the tires a bit. But no VIP promoter has transitioned to be an operator of a large-scale integrated resort before.”

“We’re considering whether to bring in an external party to help us. You can draw the conclusion that it might be a brand or a business partner,” Mr Pine says, while assuring the tower will be built.
“Any brand will have its brand standards and that will have an impact on certain design aspects. There’s been no decision, and we have done the design work to build the tower according to our vision as the owner-operator. But we want to leave the option open, to not lock ourselves into something that may be problematic in any negotiations.”
U.S. regional gaming operator Pinnacle is slated to develop Ho Tram’s second casino resort by 2017, even though it has written down its entire US$117 million investment in Asian Coast Development. Pinnacle declined to answer questions from Macau Business about Ho Tram, as did Harbinger.
“Ultimately we don’t think any further resorts will be built unless the government makes significant changes to the gaming regulatory structure,” Mr Govertsen says.
“Creating critical mass to generate energy is vital,” Mr Pine says. “The original plan was for five big resorts. Maybe that’s what we’ll do.”
Three of the resorts wouldn’t have casinos, under the current agreement with the government. “But they could have electronic games, as long as they were five star,” he notes.
Mr Pine says he hopes the other resorts would be different from The Grand. “We have the water. We could build a marina, do water sports. There are lots of cool things we can do.”
He believes the government will be flexible about what is developed. “The biggest thing they’ve been consistent about is the level of investment and that tends to be around the US$4-billion mark.”
Mr Pine admires Singapore’s model. “You look at Resorts World Sentosa and you get the sense that the amusement park there does drive a good bit of traffic. We have the ability to do something that is similar.”
“It’ll take a little time, but this place will be incredibly successful,” Mr Santangelo says. “I wouldn’t be here if I didn’t think that would be the case.”