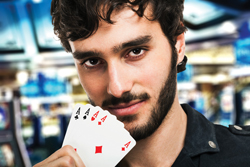 Intertops’ story begins back in 1983 when the German founder of the company packed his bags, left for England and then revolutionised the German sports betting scene…
At the time sports betting was illegal in Germany, but Intertops’ founder Detlef Train was able to successfully obtain a license and a safe haven in the UK. Before Intertops, the German market was in a woeful state; it was ruled by a state-run monopoly and only offered TOTO games [lottery – Ed] and the range of bets available to customers wasn’t anywhere near as good as it could be. When Intertops was founded it strove to drive up the quality of the whole betting experience and saw an opportunity in the German market. The founder used his British bookmaking license to offer sports betting services to the German public, at this point operating under the name ‘Intertops Sportwetten’. Adverts were placed in special interest magazines; betting slips were mailed weekly from London to Germany and customers called in to place their bets. Foreign transactions were a tricky and expensive option a quarter of a century ago and so the customers sent their stakes in cash by post. Detlef Train waited impatiently for the postman until the first envelope arrived with a 20 DM note…
The company always adapted quickly to new developments. The Facsimile (fax) was kind of a revolution in the 80s and it enabled the company to send betting slips to Germany without delays as well as accepting bets by fax. Before the internet, Intertops invested heavily in presence on Teletext. Every postbox, fax machine and TV set was a betting facility. In each household you could look up the actual odds on Television. The whole concept was always based on a remote strategy – bringing the betting experience into the customers’ homes.
After Prime Minister Margaret Thatcher privatised the British Post Office delivery times increased immediately and Train had to look for an alternative. Austria, with its liberal regulations, was an obvious choice, and Salzburg became the company’s base in 1992. Business flourished, but Detlef Train was continually on the lookout for ways of developing the company.

WWW
Simon Noble came along a bit later, but ended up being instrumental in Intertops’ success. Noble was an 18-year-old student reading banking and internal finance at the University of Manchester when in 1989 he got a part-time job as a ticket-writer at Intertops. He quickly saw the potential of the company and rose up through the ranks, leading the company’s ground-breaking internet expansion team in 1994.
In 1994 there were 30 million users of the World Wide Web. The company saw a new potential – 30 million betting shops on the screens of internet users worldwide. The decision was made quickly to offer bets online. And so it was that with great pride (and the rattling of a matrix printer) Intertops facilitated the placing of the world’s first ever online bet in January 1996 and the first online sportsbook was born. The bet took place on the evening of January 17th 1996 by Jukka Honkavaara of Finland who placed a $50 bet on a cup game between Tottenham Hotspurs and Hereford United in the UK; funnily enough he won!
However, at the time the internet was still regarded with distrust by many people; untold numbers believed that it was simply a breeding ground for pornography and radical politics, and nothing more. Countless experts warned Intertops against conducting betting on the web, but the founder was passionate about innovation even if it meant taking a risk – and that decision ended up utterly revolutionizing the betting industry. “I can remember,” recounts Train, “that everyone told me to leave it well alone. That it would only ruin the reputation of my business. But my view on life is that one shouldn’t just accept things as they are, but start questioning and looking at things from different angles. I just ignored those who asked why anyone would ever want to place a bet on the Net.”

Happy Birthdays
This year the company also celebrates the 15th birthday of its online casino that was launched in 1998. The whole concept behind how Intertops.com was set up, from the very beginning, was based on interactivity.
The much simpler approach would have been to show the odds on the website and let punters send their stakes by email.  Customers could make deposits in real time with credit cards, pick their preferred games and place their bets.
In the beginning, Intertops relied on the postal service. The business model revolved around sending betting slips to customers in Germany, and those same customers placing bets via phone or post. When Intertops set their heart on professionally utilizing the internet, it was primarily because they saw it as a way of increasing the company’s reach and interactivity with punters.
There was no slow start and the learning curve was very steep. The online business went through the roof due to a huge worldwide demand. The first players came in through Altavista which, in those days, was the most popular search engine (incidentally, it shut down this summer). After a few months, a huge advertising campaign was invested in Hotmail – at the time the leading free-email provider- that brought in huge volumes of new customers. In less than a year the online business was bigger than the traditional business.

Mobilitops
In keeping with a philosophy of constant innovation, when it came to mobile technology once again Intertops was the first. Just as it’d helped to place the first ever online bet, it also facilitated the placing of the first ever mobile bet via WAP in 2001.
In some ways the introduction of internet betting and mobile betting was very similar. There were the same crowds of nay-sayers, people who thought it was a terminally crazy idea. As Helmut Potocnik of Intertops said, “We were hearing the same critical voices: Who on earth will ever place a bet using his mobile phone?”
The biggest factor in Intertops’ success is that it stays ahead of the curve. To avoid stagnation, it’s constantly searching for new opportunities and different ways of presenting its product, and at the turn of the millennia Intertops executives saw the immense potential in the mobile market. Since then they’ve never looked back.

The future
“We are far from being arrogant,” says an Intertops spokesman, “but sometimes we have a good laugh when people keep saying that mobile is the future. We’ve had mobile technology in the business model for the past 12 years and we will continue to drive new possibilities and technologies that will give our customers an enjoyable, fair, convenient user experience.”
“The introduction of both online and mobile betting has played a major role in making the business more democratic. Every citizen can decide what he wants to do (and what he doesn’t want to do) and where he wants to do it.
He is no longer at the mercy of restrictions and regulations. The whole business of Intertops has always been customer-centric. It has to be as convenient as possible for the customer. It is hard to predict how it will look exactly in, say, 15 years, but Intertops will continue to serve customers following those principles: make it democratic, available and convenient and pick the right technology to fulfil.”