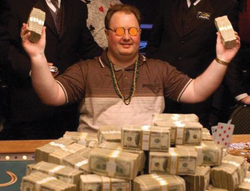 Flash back to 2004… It’s a time of innocence and inexperience. Greg Raymer has just won the World Series of Poker at Binion’s Horseshoe, beating 2,575 opponents in the largest Main Event yet. Poker sites devote space on their home pages to answering questions like ‘can’t people collude online?’ and ‘what happens if I get disconnected?’ Good players routinely fold medium pairs to a single raise…

Poker was nowhere near as big or as popular as it is now, but the industry was excited and constantly coming up with new ideas about how the game could be played. While the word ‘innovation’ is sometimes used too lightly, in the past ten years we have certainly seen many innovations, a few of which, like fast-fold, tracking software or mobile poker, have changed the game forever.
To me it’s interesting that in the history of online poker almost every single innovation has been introduced by sites which were not the market leader at the time – indeed they were often relatively new entrants to the market. Established market leaders have little incentive to innovate – they can let the smaller sites experiment, and then pick and choose those that worked the best to implement themselves.
Lately there has been more and more apathy towards poker in the wider industry, and more and more people bemoaning the lack of innovation. As a man who has invested most of his career into improving poker software, the question ‘is there still room for innovation in poker?’ is utterly offensive to me. Yet the fact that it can be asked without irony, and be received seriously, is a sign of our cynical times.
There’s no doubt that it’s harder to innovate now than it was in 2004; sure you can come up with ideas, but implementing them is another thing. There are a number of reasons for this situation, but in my opinion regulation has played the biggest part. In 2004 there was only one poker market – the worldwide market – and each operator picked one regulator. Now there are around 30 regulatory bodies each with its own set of rules and regulations, and both operators and software providers must comply with the rules of each jurisdiction in which they do business. What’s more, we’ve witnessed a few of these jurisdictions actually go out of their way to discourage innovation – for example France – which has a list of ‘permitted games’ (only Hold’em and Omaha are allowed).
Regulation, which has been rightly concerned with protecting players, has unfortunately had the unintended effect of stifling innovation and competition, by making it difficult for startups to get off the ground. This regulatory hurdle may mean that we have missed our industry’s next big disruptive company – our Über, Spotify or Tesla.
It also means that established companies must spend resources on compliance, resources that they could be utilising to develop new and exciting products. If the market leaders do this, then there is even less pressure to innovate on the market as a whole.

But does this mean
innovation is dead?
No! First of all, nobody is short of ideas. Every poker manager I’ve ever met has had a list of them as long as their arm. The problem is not coming up with new ideas; it’s seeing them through to a final product.
Secondly, yes, regulation is a hurdle, but it’s a hurdle that’s here to stay. Companies that embrace regulation and learn to innovate regardless will still be around in ten years’ time, and those that use it as an excuse might fade away.
Thirdly, just because you aren’t a startup it doesn’t mean that you can’t act like one. At the MPN that’s exactly what we’re doing. In poker we’re smaller and more agile than the giants in the industry, and that works in our favour; we can work quickly, try new things and take a gamble or two. Plus we have a huge advantage over genuine startups, which is that the MPN is powered by Microgaming and we can draw on the wider business and the help of an established, experienced team when we need to.
Lastly, and perhaps most importantly, we know that to beat the market leader you don’t just copy what the market leader does. If people want to play on PokerStars they’ll play on PokerStars not an imitation. We know that if we are to be a success, we are going to have to offer a genuine and compelling alternative to the market leader. And that is what we’re going to do.