Last year Shooting Star Casino in Minnesota erected a new sign outside to draw in and impress customers – and it’s working. William Marsh and Dan Combs spoke with Casino International.

Casino International: Last year you had a new sign erected and it sounds as though it might be visible from space.

Bill Marsh: It may be! The sign was completed around July 4th, 2014, and we had taken several months in designing and putting the pieces together for the sign; we really wanted it to be a showpiece for the casino, helping it stand out among the competition within the state and in North Dakota. To basically show our guests as they drive onto the property that ok, we are the entertainment destination in Minnesota.

CI: How close is the sign to the casino and how big is the display area?

CI: What’s the area around you like, is it dark?

BM: We’re in a small town, Mahnomen Minnesota, there are not any really big cities nearby. The biggest in the area would be Fargo, North Dakota, which is about an hour and 15 minutes drive away. It’s a very rural area, there is industry and machine shops, manufacturing, and a lot of farming.

CI: So not much light pollution, and the sign really stand out?

BM: Absolutely. We have been told that on a good night, people are seeing the beacons [four lights atop the sign] from 25 miles away. 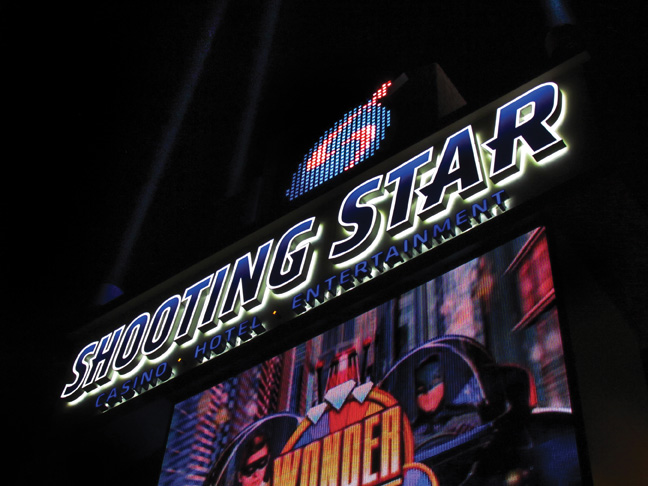 BM: Yes, so that improves visibility, especially when you get on one of the few hills that are on the drive out to the casino. The sign is around 65 feet tall; the casino is about 30 feet at its highest point, so it stands out against the building as well.

CI: Has the sign had any appreciable impact that you are aware of?

BM: We haven’t seen significant guest counts per se, but we have gotten a lot of comments as well as public response in the media about the sign. We’ve had a lot of newspapers and media calling, asking about how long it took to design and construct, and I know Indigo Signworks, the company that designed and erected the sign, has gotten flooded with phone calls about it. More on the note that it has been good press than guest counts but we have significant traffic in the summer; we knew that was when we wanted the sign to go up because of that traffic; we want them to get the feeling that this is the number one entertainment destination in this region.

CI: How long did it take to implement, from concept to execution?

BM: We started looking at this in July 2013, so it was about a year from the design stage. We had some other projects going with Indigo at the same time so that was not all working on the sign, but the original inception was around then.

CI: What messages are you using the sign for? Standard animations and eye-catchers or are you marketing specific promotions?

BM: We are using it to promote things we have not been able to in the past – new slot machines on the floor like the new Batman slot, the Walking Dead slots, as well as our promotions. Now we are able to display these things in high definition and as you would see them on a HD TV at home.

CI: Any plans for any further signage?

BM: We have it in the works to finish off the rest of the property signage with the same brand and colour palette for all of our entrances; we also have a sign that is ten minutes south on highway 59, and that will be displaying the time and temperature year-round; that will have the same exact look as the main pylon.

Dan Combs, Sales Representative and Project Manager for Indigo Signworks, oversaw and realised the project, enjoying an unusual amount of creative freedom, as he explained to Casino International…

CI: The process for the Shooting Star sign went out to tender and Indigo won thanks to your technical specs; is the casino market a significant one for you?

DC: That’s a tough question to answer! We live in a region where there are a number of different casinos and we do strive to assist all of them. Obviously, Las Vegas, Nevada and Reno are huge areas when it comes to US gaming but from a local standpoint we do quite a bit with a number of different gaming facilities in the region.

CI: It always impresses how well regional casinos in the US are set up for their local markets. Shooting Star seems to have requested a sign that will work well across Minnesota’s relatively flat terrain and be seen from a long way away.

DC: We have a lot of hills and trees, it’s not as flat as you might think. Minnesota is known for its lakes, too. But in the region of Mahnomen, the majority of the area is farmland so it’s quite flat, wide open spaces.

CI: In design terms, was there anything you had to bear in mind because of that relative flatness? Is there light pollution legislation, for example?

DC: The benefit of dealing with an Indian gaming facility is that these are generally located in areas where it might be considered a sovereign nation. The tribal council and the location of the casino – and the sign for that matter – are placed in an area where regulations are more determined by the tribe than the city or county. In that situation you do have a little bit of creative freedom when it comes to that. However, you don’t want to create something overbearing and even offensive to look at so we hold the reins in a little bit! You don’t want to create a square peg for a round hole.