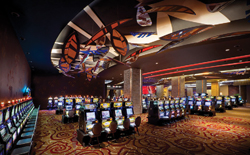 As the expo circuit in Latin America moves to Panama this month, which as an improved event seems to have put paid to the Mexican expo that has been postponed till next year. Meanwhile, the organizers of FADJA Colombia, which had its biggest show in Bogota last month, have upped the ante in Peru, where the organizer had been running a conference series with product samplers in small booths for the past three years in Lima, as CIJuegos Peru.
This year the conference event has changed its name and will try its hand at a full expo event as FADJA Peru at the end of May, mesmerizing some companies with this approach as the country has an established event, Peru Gaming Show, traditionally in August. Certainly, Peru is having a buoyant economic time with one of the best regulated gaming industries in the world, but two gaming expos might just be a show too far.
Sagse Panama 2013 this year has added an extension to its name to include Central America and the Caribbean, and while there is room for growth in the expo circuit in that direction, it is questionable whether there is room for two gaming events in one country, whether they are England or Argentina.
The PGS organizers have been very quick to emphasize that they are the only show in Peru in a broad message on this matter to the global industry.  As duty calls, see you in Panama and Peru in during this month of May!
Cheers,
Ricki.

Chile – Government to regulate “clown casinos”
According to some political commentators, the time is ripe for some populist initiatives as a preamble to the next year’s presidential elections. Government strategists will have taken notice and raised the alarm over more than 1.7 million people who play gambling machines, called “popular games,” in effect seeking recreation in illegal gaming throughout Chile.
A study of the activity in the so-called “clown casinos,“ commissioned by racing and betting organization  Polla Chilena de Beneficencia, has shown that there are 1.7 million C-D economic strata gamblers who play on Chile’s illegal slots to a monthly spend of about US$13.52 each, almost US$23 million. There is nothing funny about this as clown casinos generate some really serious amounts of cash from low income groups.
Against this political backdrop, the Executive prepares a white paper to legislate the operation of slot machines outside casinos in the country. Renato Hamel, local regulator and Superintendent of Casinos, said that there are some 200,000 slots operating in what they see as popular gaming parlours in neighbourhood districts in the South American country, but that a new law would only be able to place around 150,000 of them within new regulations.
According to the draft law to be adopted in the second half of this year, operators of slot machines installed in “popular gaming halls” would pay the same specific tax paid by casinos under the 2005 law. To date, all gaming machines operating outside casinos are illegal because they simply are outside the casino regulations.
The projected legislation would give powers to the SCJ to regulate the activity of all slots operating outside the casinos under the regular certification and approved controls as well as monitoring compliance, especially on the matter of slots payback percentages, minimum and maximum bets, plus other regulatory variables.
The position of the Executive on the long standing regulation of “neighbourhood slots” has been applauded by operator associations in this activity, but the Asociación Chilena de Casinos, that groups together licensed properties, insists that slot machines cannot operate outside of casinos, adding that legal approval and certification of gambling devices “have a preferential and exclusive right to operate in casinos established by law in the country.“

First Global Gaming Women in Latin America event
The American Gaming Association (AGA), producers of Global Gaming Women (GGW), and Monografie, the organizer of SAGSE Central America & Caribbean @ Panamá, are entering into a strategic co-marketing agreement to promote the first Global Gaming Women in Latin America.
The event is scheduled at Hotel El Panama Convention Center, inside Expo SAGSE at the Lounge, on Thursday, May 9 at 12.30hrs to 14.30hrs. Speakers Marta Sanchez of Covey Consulting, and Karen Sierra-Hughes from GLI will deliver on the theme:  “How to be more effective and increase leadership features mainly through personal and peer influence”. The event is exclusively for professional women.
“This is an important responsibility we have by hosting for the first time in LATAM this kind of networking event. We believe in the GGW project because for us relationships are one of the keys elements for success. We want to help women in LATAM to have their networking in our events. Panama is the first, and we are sure that we will do so again during the Buenos Aires event in November,” said Alan Burak, show manager of SAGSE Central America & Caribbean @ Panamá & Buenos Aires.
AGA and SAGSE plan to work side-by-side, coordinating efforts and marketing campaigns to create more and more networking in the industry that will encourage the industry in LATAM.
Keli Elkins from at AGA said, “SAGSE will help our efforts to cultivate the WWG brand in Latin America and where female gaming professionals will create lasting connections and learn from one another as well as nurture emerging female leaders throughout the industry.”

PGS 2013: “We are the first and the Gaming Show in Peru”
Peru has a consolidated gaming industry and enjoys international recognition for good gaming legislation because of the application of regulations in the industry, which is the reason for enquiries from different countries and jurisdictions. With slots online controls for the whole industry in the country established in 2012, Peru is an example in regulation and transparency, not only in relation to regulated gaming, but also in the fight against problem gambling.   For this reason other countries look to Peru with confidence as a global leader in the industry.
The country has enjoyed great economic growth rates of between 6-8% per year for the past 6 years; and on August 14-15 August, leading Latin American expo PERU GAMING SHOW 2013 will celebrate its 11th edition at Lima’s Jockey Expo Center in nearly 50,000 sq. ft. of expo space, a 30% increase on last year.
Joe Lopez, CEO of Affiliated Marketing Group, organizer of the international expo, said: “Currently, in Peru, we have a much regulated market, and we can truly state that our firm has been an important part in this process with inside participation in gaming growth in Peru since the beginning.  We are the first and the only gaming expo in the Peru. 11 Years ago, this event started with an area of just 5,000 sq. ft. at Lima’s Marriot Hotel and since then there has been sustained growth; among other things, thanks to the support of manufacturers and suppliers who have always trusted the Peruvian market, notwithstanding a time of world economic upheaval. Also and most importantly, this event has contributed to strengthening the gaming industry in Peru with favourable results that made the new expo promoters who took over in 2011 drive growth with the slogan – A Show for Peru.“
AMG SAC, organizer of the event, invites all the gaming industry and the public in general to visit the best international gaming expo PERU GAMING SHOW 2013. Lopez added, “This year, we are working to give all Peru’s operators an extensive and complete high level event with conferences and workshops of interest to help with the development of their operations, full of entertainment and fun and above all, loads of trading and business.
“As regards our exhibitors, we will give them all the facilities possible so they can exhibit all their products, without limitation. Also, we offer other services to facilitate their logistics, as we have an exclusive agreement with one of the most prestigious freight forwarders with much experience in the gaming industry, which will guarantee  facilities for temporary import of gaming machines and equipment arriving for our Show. Finally, we offer services of advertising and merchandising of great quality, and everything that guarantees an excellent introduction of products and services to the public”.