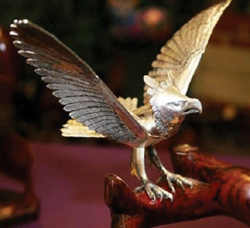 Well, although I wasn’t that sure about going to Lima for the Peru Gaming Show 2012, it didn’t take much to make such a win-win decision and I was pleased to see that the 2-day event had a great attendance.   This confirmed the expectations of the organizers who were well pleased at the end of the Latin American event that the principal companies in the industry had attended.

The event also presented important conferences during two days as part of PGS 2012.    These dealt with topics such as Internet gaming and casino marketing and there was a special professional presentation of the installation of the Unified Online Control System (SUCTR – Spanish anagram) by engineers and technical staff of the regulators at the Ministry of Foreign Trade and Tourism.

The leading Spanish language gaming industry magazine in Latin America, CASINO INTERNATIONAL AMERICANO, which is present at all the gaming events in the region, was represented by three delegates and is preparing a thorough report on the event for its September/October issue, which will have an extensive distribution at G2E 2012 in Las Vegas on 2-4 October.

Now a few days sojourn in Bogota, where we plan to visit Codere’s brand new Crown Casino signalling the company’s full backing of Colombia as a gaming destination.   You never know, I may even have a punt!

New casino licence process begins in Chile
Chile’s gaming regulator’s Superintendencia de Casinos de Juego (SCJ) has announced that the process for licensing one casino will start on 02 January 2013. According to Law No. 19,995 of 2005, there is provision for 25 casinos on a national basis, excluding the northern region of Arica that borders Peru, where any number of casinos can be opened according to the Law.

At present there are 24 casinos operating in Chile with 17 of them licensed by due process in 2006 and 2008, plus 7 which are municipal concessions under a different law but that will fall under the 2005 Law in 2015.  In March this year, the company granted a licence to operate the Casino Gran Ovalle S.A. returned its licensing rights to the SCJ, setting in motion the new tender process next year.

According to the Law, the casinos can be installed in any city according to the investors’ interest with the limitations that no more than 3 casinos can operate in a single Region, casinos must be located at no less than 70 kilometres’ distance from each other, and excluding casinos in Chile’s Metropolitan Region, where Santiago the country’s capital is located. So far, there are casinos operating in the following regions: Valparaíso, Bío Bío and  Los Lagos.

The dates set for the 2013 Process are: Tender announcement for 02 Januany-28 February; Presentation of Projects to SCJ from 01 march to 01 April; Due Diligence, pre-qualification of companies, technical evaluation of projects and Proposal by the Superintendent of the Consejo Resolutivo at SCJ from 02 April to 01 July; and Decision by the Consejo Resolutivo from 02 to 31 July.

As the new system is being designed, Jorge Rodriguez, president of Buenos Aires’s Instituto Provincial de Lotería y Casinos has started a series of meetings with technicians from the University of La Plata in order to speed up the system that controls betting from some 3,750 lottery retailers in the province.

The contract that controls online gaming in Buenos Aires province has a current yearly value of around US $1 million for Boldt subsidiary Boldt Gaming S.A., which has had a contract since 1993, and paid the capital province 5,25% of gaming turnover estimated at US $325,7 million per annum.

Codere opens fourth casino in Bogota
In mid-august, Spanish gaming operators Codere delivered a sumptuous inauguration party in Bogota where it opened its fourth property of the brand Crown Casinos, in San Rafael mall. Most of the local gaming professionals attended the Codere party for the opening of the upmarket brand signalling the company’s vision of gaming in Colombia under the control of the new gaming regulators COLJUEGOS.

Codere has invested US$15 million in the 45,000 sq. ft. property that boasts 215 last generation slot machines, 15 gaming tables, a VIP gaming salon, a concert room for 140 people and parking for 40 cars. Local subsidiary Codere Colombia says that the new Casino Crown is “the most serious and representative bet aimed at positioning the brand as the best gaming offer in the country”.

In addition to its 5 Crown Casinos (there is one in Medellin also), Codere has 16 other gaming rooms in Colombia and in 2011 invested US$9 million to consolidate its position in the country with this brand and its more traditional business units under the Fantasia Royal brand. Codere employs 900 people in all its Colombia operations.

Gaming represents an estimated 1.5% of the country’s Gross National Product, and according to  Felipe Navarro, CEO of Codere Colombia: “Gaming penetration in Colombia is not as high as other countries, including Latin American countries, and the market has not reached 3.2 billion Colombian pesos (US$1.76 billion), yet. The market is small but has great opportunities for growth.”

Monografie establishes new Gaming Industry award
The “Golden Eagle” in recognition for lifetime achievement is intended for gaming personalities. A new and ambitious project from the organizers of SAGSE is to identify the 50 most prestigious managers, executives and/or outstanding individuals working in Latin America to be awarded by this “Lifetime Achievement Award.”

The objective is to demonstrate and highlight the individual qualities, boost the image of the candidates, their actions and achievements throughout its history in the sector to date, promoting public recognition of professionalism and excellence. The ones chosen to receive the award may be individuals from the public or private sector that have significantly contributed to the development of the sector in Latin America and remain on duty. The transparency in their actions and ethics is the key to receive this honor.

The object that represents this award is the “Golden Eagle”. It is an original sculpture of the Harpy Eagle or Crowned Eagle on a wooden base of “cocobolo” a native Panamanian tree from the inside of the thick jungle.

The eagle is the symbol that represents the ideas of beauty, strength and prestige. It’s a bird that has large claws to take their prey and powerful legs so they cannot escape. They also have incredible eyesight that allows them to discover and follow long-range goals. Eagles have a clear vision in times of conflict or crisis. They can also clearly see what others just ignore.

At its next event SAGSE in Buenos Aires, November 13, 14, 15, Monografie again will give this award to 5 professionals who will become part of the elite. The award is intended as an incentive to improve the performance of all those great men and women who have some of those skills mentioned and make a better example for all the industry. Four gaming executives have already received the award in June in SAGSE Panama: Jens Halle, Antonio Sabaj, Alejandro Saraintaris y Eduardo Aching.

What women want?
Almost half UK and US adults play mobile games