The guys who’ve just come back from Macao’s G2E Asia 2014 have told us about this great gaming market of the region. No doubt there is a gaming boom taking place, and we’ll be there taking part when we travel as part of our electronic title www.casinocompendium.com  team in the new show for Asia, next October, and promise to bring you news from there also.
Nonetheless, our Latin American region is not too far behind, with casinos and gaming operations opening and about to open from Honduras to Chile. And with local regulatory bodies bringing up to date the industry in the region, as is the case in Colombia, where Coljuegos is doing a great job.
This we have been party to, as we have experienced Coljuegos’ achievements in Colombia when we travelled to Bogotá for FADJA 1014. At this gaming show a great number of visitors and companies took part in the new sports betting and online gaming sector. In our sister title, leader in the region Casino International Americano, our Show Review will report extensively on the event in our July/August issue, where we will also carry a special report on the Peruvian Gaming industry.
There are great expectations for the Peru Gaming Show 2014 at Jockey Plaza on 11-12 June. Someone voiced enthusiastically, “This will be the World Cup for us because as far as Football is concerned, the World Cup is still light years ahead!”
And now, we’ll pack suitcases to rendezvous in Colombia en route to Lima for PGS 2014, which they say will beat all previous records for this Show and is already seen as one of the largest regional events. And then on to my home town, where at the end of the Show we will be able to see the start of the Brazil World Cup, on June 12; With luck, we might just make Rio, Sao Paolo, Manaus, Belo Horizonte, or any World Cup city to savour the event! See you there!
Cheers,
Ricki.

The massive undertaking is to build a world class luxury resort with full service casino, cruise ship destination and a private, gated luxury residential community for the discriminating consumer with a social conscience in La Ceiba, a neglected and undervalued jewel on the Central American coast. Colonia Las Brisas de Peru has approximately 150 acres including the pristine coastal beach front with 180 individual home lots available for the development.

The residents of Colonia will benefit from the infrastructure, development, jobs and improvements through cooperative efforts and the charitable status of the Foundation. Bringing opportunity, security, education and the rare, pristine beauty of the coast, its people and the Country of Honduras to the world, the Colonia Brisas de Peru Foundation with Billionaires Row will uplift the residents, the area, the country and the world.

“In keeping with our philosophy of providing the finest luxury products, goods, services and destinations while maintaining our social responsibilities by helping others and raising human consciousness through charitable giving back…We at Billionaires Row are proud to join Las Brisas de Peru Foundation in this development project,“ said William Benson.

“With Billionaires Row we expect to build and provide the best schools and medical facilities, the best wages and security for a people that deserve a fair opportunity to elevate their community from nothing. We plan on taking the colony and its people to new levels and heights never before imagined. We are focused on making sure every resident in our colony is stable and hopefully spread that momentum throughout the rest of the country of Honduras!” added Joseph Clark.

Coljuegos is set to correct the absence of reliable information on the operation of the Electronic Gaming Devices (EGM), which is one of the main weaknesses in the compliance of regulated gaming in Colombia.

The Coljuegos project to interconnect EGMs online has been in process since 2013 and up to now Colombia’s gaming regulator has organized about 48 meetings with gaming organizations and other representatives of the gaming industry to establish the best way to carry out regulations for the control of EGMs online.

The latest of such meetings took place in March, when Coljuegos presented a draft of the regulations for the slots online control project, and published the document in the Coljuegos Website in order to receive comments from all interested parties. Since then, Coljuegos has identified 10 types of comments on the project, and mostly they refer to concerns about the costs associated with the interconnection of the EGMs, as well as the period planned for the implementation of the new regulations.

Cristina Arango Olaya, President of Coljuegos, said: “Coljuegos is currently analysing each one of the observations and plans to reply to all communications received. Additionally, Coljuegos will call a meeting where all the concerns raised by the sector on the projected slots online connection will be addressed. We hope for an ample participation from the operators in this occasion and through this, I invite you all to keep an eye on the date of this meeting, which we will announce through our communications channels.”

President of Uruguay, José Mujica, has objected to a tender for the construction of a casino hotel in Paysandú, after considering that the US$19 million finance for the Argentine-Uruguayan investment project would be made with funds from a tax haven. Reports from Uruguay said that President Mujica, simply said: “I’m not signing this!”.

The amazing thing about this project, which was held up in the Presidential office, is that it already had the approval of all State controls, including the Advisory Committee of the Ministry of Economy, the Country’s Accounts Control Court, and the anti-money laundering office of the Central Bank, as well as the approval and signature of former Minister Fernando Lorenzo.

Back in December of last year, the opposition legislator, Jorge Gandini had reported that funding for the project came from a tax haven, adding that therefore, “it is assumed that the funds are, at the very least, a product of tax evasion of business done in Argentina. Otherwise, they would be deposited in Argentina and in the tax return assets of the investor group. However, the funds have been deposited in the Bahamas and are not part of anyone’s income statement, and these are the only funds available for such project.”

All early indications are that PGS 2014 International Gaming Show will break all of its previous records this year. Joe Lopez, CEO of show organizers Affiliated Marketing Group, said: “With a 40% increase in exhibit space over last year, which is already completely sold out, we are on track to offer the largest gaming show experienced in Peru and possibly all of Latin America.

“Our pre-registration for visitors attending the show and our 4th International Gaming Conference already exceed last year’s numbers, with much interest aroused by the topics being offered by our expert presenters and, again, we expect standing room only available at each day’s event.

“The feedback we have received and the amount of interest being generated has made us realize that we are now much more than just a show for Peru. With the many factors Peru has in its favour, we are sure to become a focal point for the gaming industry in Latin America.

“Our location, central in the region, together with top international airport, great tourist attractions, world-class gastronomy, favourable climate, political stability and constantly growing economy have all been big contributors to the growth and success we are experiencing. We look forward to seeing you in Lima, Peru at the Jockey Exposition Centre on June 11 and 12.” 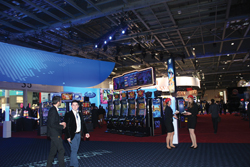 The time of Sands
Latino America