ICE 2018 broke new records once again, and following this we had literally a flying visit to Lima, Peru, to meet with the gaming regulator, Manuel San Román, Director General de Juegos de Casino y Máquinas Tragamonedas, to find out the reasons why there was no progress on the legislation for online gaming and sports betting (and also to escape the European winter). 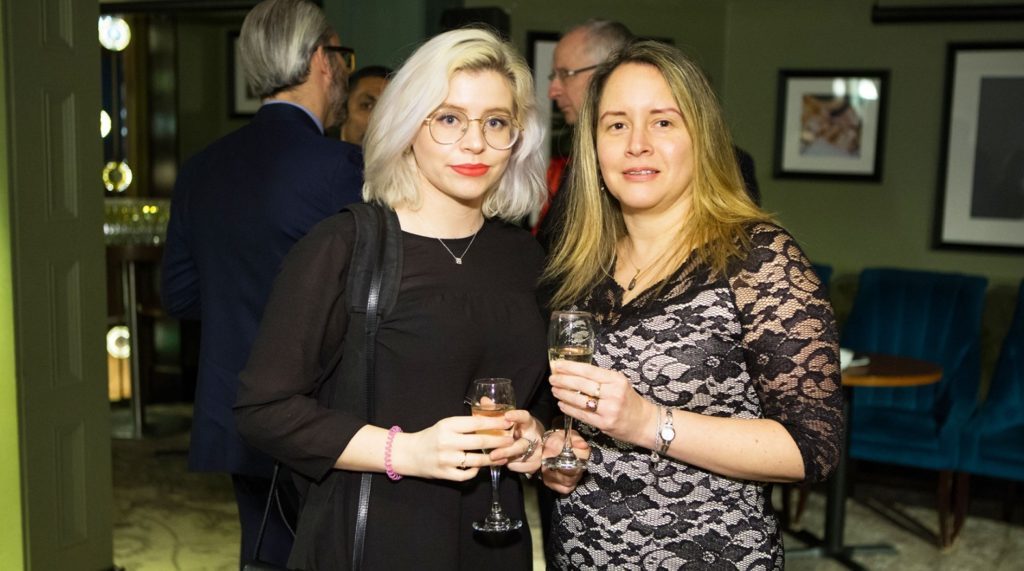 The simple reason is that apart from the political constitutional problems affecting Peru from the embarrassing international corruption epidemy known as Lava Jato, San Roman informed me that the draft online gaming legislation has had to deal with other issues relating to other State entities, which we will report more widely in our next edition of C.I. Americano.

As the FADJA 2018 reports below, the London Show was unique. This year we had the support of our cub reporter Kirsten Chavez-Muñoz, undergraduate at South Bank London Uni, and Rosa María Felippe, who apart from dazzling each and every one with Latin American charm, worked hard to deliver quality reporting and images from ICE 2018 and the ceremony of the British Casino Awards, organized by our publishing house at the Hippodrome Casino in London.

Back in London, the terrible weather caught up with us, but luckily we’re off in another couple of weeks, back to Latin America to cover events in Bogota, São Paulo (BgC) and Cancun (CGS) – all of them in April, and will publish reviews in our next edition. See you all there!

The new Secretary of the Interior, Alfonso Navarrete Prida, has made changes following his rise to chief of the department Mexicans refer to as Segob – short for Secretaria de Gobernacion – and has appointed Eduardo Cayetano Cacho Silva as Director General de Juegos y Sorteos, or gaming regulator.

In a statement, Segob reported that Cayetano Cacho will be responsible for running Mexico’s regulatory agency and, like his predecessors, has a brief to guarantee compliance of current gaming policy and regulations especially set out for the issuance of permits to operate gaming and lotto games in accordance with the Federal gaming and lotteries legislation passed in 1947.

Also the new gaming chief brief is to follow applicable regulations to ensure fairness and transparency in granting of permits and the daily monitoring of licensed operators, so that those who have authorization are able to run with the appropriate permits in compliance with the law.

Changes in President Peña Nieto’s government have taken place less than six months from the date for the next federal elections, where the ruling PRI party is third in the presidential polls and current political consensus anticipates that little or nothing will change with the new appointments in Segob, particularly in relation to illegal online gaming, which is rampant in the country.

The Presidential Decree 95/2018, approved at the beginning of February by Ministers General Agreement, has made changes in the ministries of the Interior, public works and housing and Social development, as well as to the National Rehabilitation Service, the organic Charter of Banco Nacional de Argentina and the liquidation of the National State Lottery.

Article 17 in the said presidential decree ended the national lottery, which also was the gaming controller and regulator in Argentina, adding that, “in terms of gaming, the national lottery maintains under its jurisdiction only the pre-printed lotteries by tickets called LA GRANDE DE LA NACIONAL.” The National Lottery has no federal character because it lacks wide territorial and jurisdictional powers, therefore losing “all corporate sense of continuity as a society”.

The Presidential Decree concludes that “there are no legal reasons for, nor is it appropriate, to maintain the games that the National Lottery exploits currently.” The national lottery was founded in 1893 by the National Congress, which authorized periodical running of a charity lottery to improve the conditions of life for the Argentine population.

In the first week of February, Uruguay’s regulators, the DNLQ (Direccion Nacional de Loterias y Quinielas), under the Ministry of Economy and Finance, announced the commencement of a programme to remove online gaming websites, illegal under present Uruguayan laws.

Last December the authorities issued a decree, based on a 2002 law that prohibits all online gambling services that have not received authorisation.  Local newspapers have questioned whether such a decree, to block online gaming sites, is a possible assault against the liberty of expression.

Responsible operators respect the laws of countries and it is the so-called ‘pirates’ that seek to exploit the system.  Luis Gama, Director of the DNLQ, has said the blocking of illegal gambling websites seeks to clean up the activity and lead to state licensing.  At present only Supermatch is authorised to offer online gaming in Uruguay.

The country, like most, does not have the perfect model for gambling regulation.  In land-based gaming the state has a strong presence and it is likely that future online gaming regulation will follow similar lines.  For the moment the decision to block the ‘pirates’ is the best way to protect profits for Uruguay’s social and national programmes.

The American Gaming Trade Show, FADJA, had extraordinary success during ICE Totally Gaming, an event that attracted nearly 1,000 exhibitors and 30,000 visitors in London. Thanks to an agreement signed with Clarion Events, FADJA took part in the event for the first time with a stand, where José Aníbal Aguirre, president of 3A Producciones, and his team were able to attend dozens of international companies interested in what the Colombian gaming market is offering today, following the regulation by Coljuegos of online casinos and sports betting. 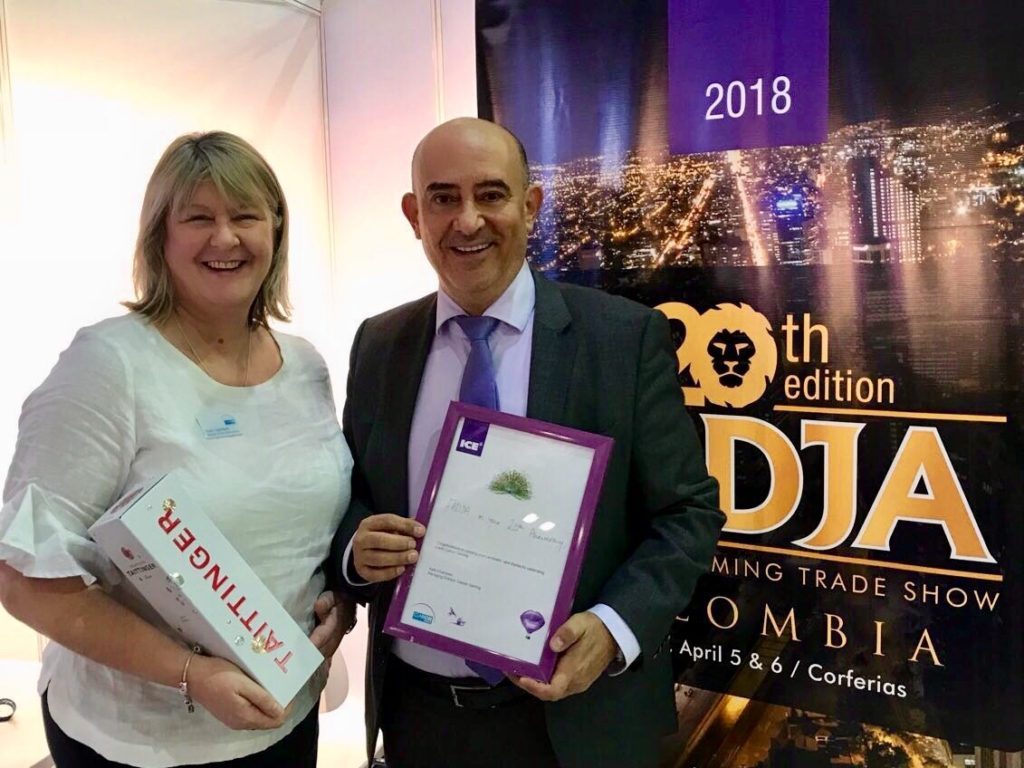 Kate Chambers, director of Clarion Events, organizers of ICE, made special recognition of FADJA with a commemorative plaque to celebrate the 20th anniversary of the Colombian gaming expo, and its next edition on April 5 and 6 in the Great Hall of Corferias, in Bogotá.

The Platinum Sponsors of FADJA 2018: Novomatic Gaming, Sirplay, Betconstruct, Golden Race, AR Management and Virtual Generation, work at full speed to make their presentation in Bogota the most productive and outstanding in recent years.

The industry associations in Colombia: Fecoljuegos, Asojuegos, Cornazar and Fedelco, have confirmed their assemblies of affiliates within the framework of the AMERICAN GAMING TRADE SHOW, FADJA, concentrating in Bogota all the actors of this economic sector and who will receive their affiliates and interested operators from their own stands.

José Aníbal Aguirre said: “The celebration of FADJA’s 20th Anniversary will be unforgettable. We have worked very hard to achieve the leadership that the Colombian exhibition shows and we want to share this celebration with those who have made it possible with their trust and support to enable us reaching this milestone. So, on Friday, April 6th, we invite you all to enjoy the program we are preparing with many surprises for all as a testimony of our gratitude.”

The numbers of the nine COTAI resorts. Doing the numbers!
Latino America