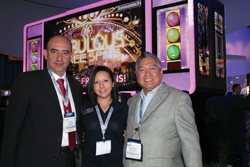 We had great pleasure celebrating ICE Totally Gaming 2013 at London’s ExCel Exhibition Centre during the second week of February, together with all the Datateam Business Media guys.   In the view of many this was the best ever gaming products and systems event to date.    While John Bruford has the official ICE 2013 Preview in this edition, for those well-versed in the Cervantes lingo we are running a few pages in our sister title Casino International Americano reporting what is of importance to the Latin American region.
As the gaming expo season get under way, Latin America blasts away with the Caribbean Gaming Show and Summit 2013 on March 13-14 at the splendid “All inclusive” – Hard Rock Punta Cana Hotel & Casino. Actually, the event opens with a golf tournament for gaming professionals on Tuesday 12 at the Punta Blanca Golf Course, where also you can find a restaurant that serves the most delicious paella this side of Valencia!
And just now in April we wind our way to Bogota for the coolest expo in the industry, FADJA 2013, which this year celebrates 15 years and will do so in great style, only as one does in Colombia. We have a brief advance report in this issue on this event and a more comprehensive one in Americano, which previews both shows. See you there!
Ricki.

After a multi-million dollar renovation the Hotel Casino Carrasco in Montevideo will reopen its doors on 9 March after a gap of several years. Under the name Sofitel Casino Carrasco, this undertaking by leading Spanish casino operator Codere, in partnership with the French hotel group Sofitel, has finally confirmed its opening date after a few delays. However, it is important that Uruguay will be once again be able to offer full casino gaming in this legendary property, which was built almost 100 years ago.

The property boasts luxury hotel, casino, restaurants and other tourist offers such as the Sofitel spa, entirely designed for the welfare and comfort of its customers. The hotel will have 116 rooms with private bathroom, parking for 196 cars, lobby, restaurant and ballroom. The Spa has a swimming pool in/out – one part outdoor and one indoor – and solarium. Guests can also enjoy the gardens of the seaside resort Carrasco.

The Casino Carrasco, has about 3.000 m2, with 407 slots and 23 gaming tables distributed on two levels, including a varied offer in slots of the most recognized brands, as well as amazing progressive jackpots linked to different groups of slots with different themes. It also boasts a number of stand-alone progressive that together comprise a unique attraction for the new casino, where every visitor can win fabulous prizes.

The Carrasco Casino has been re-created with a sumptuous, festive ambience, creating the perfect environment to play Poker, Blackjack and Baccarat or to bet on Roulette with sumptuous red and gold table layouts. Playing a few dollars on slots with cutting-edge technology is also special in this state of the art casino that is enhanced by a powerful visual impact. Something special is the Casino VIP lounge, dedicated to high action betting for high rollers who are ensured perfect privacy thanks to a designer glass partition.

Located in the residential neighbourhood of Carrasco, just five minutes from the international airport of the same name, the Carrasco Nobile firm’s investment is expected to reach US$70 million and has been made within a mixed business plan with the city of Montevideo, which will get a monthly fee for the exploitation of the casino as well as a participation in the profits of the casino for 30 years. The venture has created 480 direct jobs in all, with 280 in the casino area, 150 in hospitality, and 50 in corporate areas.

Mexico – Lawmakers to investigate corruption in casino permits
Mexico’s Lower House has approved the creation of a Special Commission to investigate the permits granted for the operation of betting gaming halls, as described in the Gaming and Lotteries Federal Act of 1947. Although very special Regulations devised in 2004 by a former forward-looking administration, added to the 1947 Act, enabled de facto casinos to operate in the Latin American country under the umbrella of such archaic laws.
Reports of this singular event in Mexico said that “this agreement came about by consensus in the Board of Political Coordination, whereby legislators from the seven parliamentary factions decided to be part of the working group with eleven federal representatives: three PRI; two PAN; two PRD; one PVEM; one for the Citizens Movement; one PT; and New Alliance.”
That is a real football team with substitutes and everything included, raring to take charge and check that there are no licences for casino operations in Mexico from the date when former Secretary of the Interior, Santiago Creel, granted permits for the operations of remote gaming halls. Sadly, in many cases these permits have been rented, sold or traded and in some other cases copied, counterfeited and even stolen.
The report from Mexico also says that: “the parliamentary groups shall appoint in the next few days their representatives on the Working Group, and these appointments shall have a validity that will be extended up to the time when it has fulfilled its mandate.”
All this is well and good, but what is far more important than these legislators lording over commissions, is the need to go into the San Lazaro Palace archives and dust off one of the many casino legislation projects to enact new casino legislation for Mexico once and for all.    Just as they have created an all-party Special Commission to look into fraudulent permits, lawmakers should create a modern Casino Law to take their gaming industry away from under-development, which is where the 1947 law and its 2004 regulations keep it, for the benefit of the country and moreover to avoid tragedies with victims such as those of Monterrey’s Casino Royale.

FADJA 2013 – Raining surprises at XV gaming show
It is just over a month to the beginning of the most important trade show of the Gaming industry in the Andean Region, FADJA 2013 on April 3-4.   The organizing team has excellent news for exhibitors and guests. Firstly the return to the Great Hall in Corferias, the excellent exhibition centre in Bogota with 10,000 square meters in a great format for comfort and elegance that has elicited lot of enthusiasm amongst exhibitors.
Secondly, comes news that a host of new companies will exhibit for the first time at the Colombian trade show, joining seasoned global leaders who return to this event year after year, such as  Ainsworth, SHFL Entertainment, FutureLogic, Legendary Gaming, y Caribbean Gaming Distributors, amongst other distinguished companies. This year’s FADJA 2013 sponsors are: Novomatic, Merkur Gaming and DR Gaming Technology.
Jose Anibal Aguirre, FADJA General Director, said: “The Andean Gaming Trade Show is a commercial exhibition filled with productivity, fun, colour and elegance. In every tradeshow we seek to present a special touch of happiness and entertainment. Since the first expo in 1999, 15 years have passed. This gives us lots of satisfaction for all the dynamics that FADJA adds to this line of the economy and our great event generates both national and international industry visitors and businessmen who arrive to Bogota each year with the specific object of attending our event.
FADJA allows something that advertising does not and this is the ability to have the products within easy touch, to know pricing strategies, quality and service options according to the needs of the client; to ask and solve any doubts with the manufacturer or distributor; to learn about and purchase first-hand the latest offerings, designs and technological advances. All of this is offered by The Andean Gaming Trade Show in one place.”
More excellent news is that FADJA has decided to highlight the social commitment that the sector has with the community.   In order to recognize those industry companies or groups that wisely use their profits reinvesting it in social works, FADJA has created the Andean Gaming Awards (A.G.A.) to grant distinction to projects of Business Social Responsibility (RSE) of the gaming industry in Colombia and in Latin America. The participants in FADJA 2013 will have the possibility of contributing to a humanitarian cause through the event known as FADJA Social Bingo, which will follow the A.G.A. awards on the evening of April 3, the first day of the exhibition.