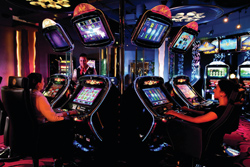 We begin this feature series reporting on industry personalities whose contributions to gaming have transcendental importance worldwide.  Paul Gauselmann, Chairman and President of Gauselmann Group, is just one of a select number who are truly legendary gaming industry personalities. In this first report Ricki Chavez-Munoz delves into the past and talks to Paul Gauselmann who, with brilliant insight, is now in the process of leading his company’s subsidiary MERKUR Gaming in delivering systems and products to international markets.

The laughing MERKUR sun is Germany’s most popular symbol for gaming and luck and is also considered internationally as a trade mark for modern entertainment. In Europe and beyond our products – amusement machines, AWP’s and SWP’s – cater for fascinating, emotional and enjoyable leisure activities.
It’s more than half a century, 56 years to be exact, from the time that a young engineer started a company in Espelkamp, in northern Germany, with the sole aim of putting some of his entertainment ideas into practice.

At the age of 21, Paul Gauselmann made the decision to put some of his ideas into practice while working for a juke box manufacturer and developed the first of many inventions when he patented a remote controller for German juke boxes, and in 1957, decided to set up on his own in the young coin-op industry alongside his regular job.  “Germany’s AWP king” was born.

However, it is closer to sixty years ago when the young telecommunications controller laid the foundation stone for today’s ‘Gauselmann Group’ as an AWP and amusement machine manufacturer and operator alongside his chosen profession when Paul Gauselmann made the milestone decision to himself enter into the business with juke boxes and AWPs, etc.

This was to be the beginning for the later coin-op machine empire that today employs 8,000 staff and has a volume of sales of approx. 1.8 billion euros. Despite the considerable workload and long working days the young entrepreneur still found time for his hobby: inventing things, and after his first invention for German juke boxes, Gauselmann has 300 patents to-date. Meanwhile, in Espelkamp, the first entrepreneurial successes were followed in 1964 by the move into complete self-employment. Paul Gauselmann already had 15 employees at that moment of time.

Casino International: You are credited with the invention of the modern arcade in 1974. How did this come about? How many machines were in operation? Who manufactured these machines?

Paul Gauselmann: “Arcades were at the centre of focus in Germany in the mid 1970’s. The entire industry almost collapsed as the many AWPs in the arcade saloons had been seen as wage-gobblers 20 years previously. The resulting decision to suggest to the state to only place two AWPs in one room at a time killed off the arcades. The business was worthwhile still in bars and pubs, but no longer in arcades. They were just a few left, working in a miserable way. My idea back in 1974 was to raise the level and offer modern entertainment centres in modern rooms with carpets and hydro-culture such as is found in 4 star hotels. I soon realised that the two AWPs that were the main arcade attraction were not enough. Thus, small rooms close to each other were created and it was a battle with the state to win through. A judgement in 1984 from the highest German court (The Federal Administrative Court of Germany) resulted that operating several operations next to each other was possible in which three AWPs per room could be placed. The birth of the modern arcade was thus in the mid 1970s and was verified by the highest court in 1984. Today 12 AWPs can be operated per room according to the Gaming Ordinance and several concessions of 150 m² each can be established next to each other.”

Casino International: In 1977, you developed and manufactured the “Merkur B” machine. I expect that these were the main machines operated in your Merkur-Spielothek arcades. What was your competition operating?

Paul Gauselmann: “The development of our first Merkur AWP including the necessary capital generation for this took five years. From 1972 to 1977. Although the first machines suffered from teething problems on the electro-mechanical side, they created a massive stir amongst players. No longer in a roundabout way, but directly was it possible to win 100 special games at a value of approx. 150 DM. These suddenly made double the cashbox – even taking the moderate technology into account – than the AWPs from Löwen and Wulff that were already well established at that time. It took only seven years for these and following ideas to contribute to Merkur reaching a market share of over 50 percent. It was a way filled with thorns in such a short space of time and with improved technology and better ideas to assert ourselves against two market leaders – and continually to do this over the long period.”

Paul Gauselmann has always been preoccupied with excellent quality control management and seven years after beginning manufacturing gaming machines, the Gauselmann Group became the first company in the industry to be awarded the German TÜV certificate, which years later led to the certification DIN EN ISO 9001:2008 for development, production, sales and service at the East Westphalian family-owned business.

The unique development from a one-man company to an international concern is an almost unrivalled German success story and throughout his career Paul Gauselmann has continued planting milestones not only for the development of the companies in the Group but the gaming industry associations as a whole, and in 1980, the Gauselmann AG was founded in as a holding company with centrally-managed services for the many companies that had been formed in the meantime.

The decision to enthuse the international markets for games and technology ‘made by Gauselmann’ at the beginning of the nineties marked a new strategic positioning. The foundation of the subsidiary Atronic and the entry into the international casino market in 1993 saw the beginnings of Gauselmann Group’s global activities. Atronic was the sole German company to possess manufacturing licences for the important casino market in Nevada. This Gauselmann subsidiary passed into the hands of the American lottery system supplier GTECH in May 2008 – with whom a co-operation existed since 2005. The foundation of Atronic under Michael Gauselmann thus underlies the thorough international expansion plan of this group of companies from East Westphalia in Germany. The largest acquisition was made in 2012 to the amount of 100 million euros with the purchase of Marwyn Gaming Ltd. (Praesepe), thus continuing to expand the business activities in England.

Paul Gauselmann laid the foundation stone of this global industry leader way back in 1957 for a successful company with innovations, creativity and specific knowledge. The Gauselmann Group has occupied one of the top positions for years in both Germany and internationally as manufacturer, supplier and operator of amusement with prize machines and fun-amusement with prize machines.
The Eastern Westphalian family-run company with headquarters in Espelkamp/Lübbecke offers innovative, fascinating, emotional and enjoyable leisure activities from modern AWP’s right up to state-of-the-art- multi-game slot machines, infotainment terminals with internet connection and money changing and processing systems.

Merkur International GmbH has currently more than 500 modern entertainment centres in ten countries and has started developments in several countries of Latin America, including Colombia, Mexico and Peru.