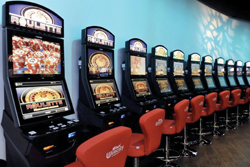 If you’re a European gaming professional, VLTs mean Italy. After all, it’s the largest gambling market in Europe, with 2011 gross revenue – excluding the five casinos, which are regulated by municipalities rather than nationally – of €18.4bn, from total stakes just shy of €80bn.

Not only does this represent an increase of roughly 50 per cent in gross gaming revenue, and more than 100 per cent in players’ stake money, since pre-economic-crisis levels five years earlier. It is also indicative of dramatic market modernisation which began in 2006, and has continued steadily since, with the so-called “Abruzzo decree” of 2009 particularly notable for the land-based gaming business in opening the doors to video lottery terminals (VLTs).

Misleadingly named, these gaming devices are nothing to do with lotteries in the normal sense, but are essentially wide-area-networked slots.

The VLTs have undoubtedly been the star performers in Italian gaming over the last couple of years and are likely to continue in that role for a while, though the issue of new licences for betting shops and poker clubs may provide a fillip to those types of land-based gaming as well.

A large proportion of Italian gaming involves machines, and by far the fastest-growing part of this – albeit not (yet) the biggest – is the VLTs,  also known as Comma 6b devices after the legislation that enabled them. (The older AWPs are referred to as Comma 6a units.)

In 2011, the ten operators in the AWP and VLT sectors generated €9.2bn in gross gaming revenue from total player stakes of €44.9bn. In other words, machines old and new represented roughly half of the total gaming market, an impressive enough proportion in itself.

However, the truly notable figures are those that show the rise of the VLTs within this context.

Gross gaming revenue from the VLTs also rose dramatically during that period, from €280bn in the first five months of 2011 to €1bn in 2012 (before tax). It thus seems likely that VLTs will account for about a quarter of all machine revenue, a figure around €2bn, this year.

That figure is all the more striking when the installed base of machines is taken into account. As at late August 2012, there were 378,000 older Comma 6a AWPs installed in venues (as well as a further 30,000 not in use), against just 45,000 VLTs. In financial terms, then, individual VLTs are vastly out-performing the Comma 6a devices.

And the VLT revolution is not over yet. A sharp growth trajectory is likely to continue until all the licences issued, allowing for a total of around 58,000 machines, are in use.

The rollout was not without headaches. Italy’s regulator the Autonomous Administration of State Monopolies (AAMS) – which is now being merged into the country’s customs authority – helped the operators by cracking down on illegal systems that it was feared might hold back revenue from VLTs, most notably the Internet terminals called “totems”; although only legal for sports betting, they were widely used for other forms of online gaming.

But the regulator also had to get tough on the positioning of VLTs within premises, reminding operators that they are only allowed in dedicated gaming rooms – not, for example, in bars.

All these challenges appear to have been met successfully, not only by the AAMS  but also by the operators and the technology and content suppliers. Major names among these include Amatic, Apex, Aristocrat, Bally, IGT, Inspired, Magic Dreams, Lottomatica, Merkur, Novomatic, Spielo/Atronic, TAB-Austria, and WMS Gaming, while on the peripherals side companies such as Eurocoin, FutureLogic, and JCM Global have also been active.

And it is not surprising, therefore, that the Italian deployments are being taken as the role models for the introduction of VLTs in other European territories such as Greece.

A second revolution?
Across the Adriatic Sea, a clearer picture of the outlook for VLTs in Greece is slowly emerging from the nation’s economic shambles. OPAP, the partially state-owned operator, is expected to install 16,500 units in 819 locations and to be the sole operator for around 18 months. Other operators will then be licensed to roll out a further 18,500 next year.

OPAP’s technology partners have still not been named although Lottomatica and its GTech subsidiary are considered strong contenders.

The country’s Hellenic Gaming Commission has also issued detailed technical standards for VLTs in an 84-page document which covers issues ranging from security to payouts.

Among the key rules are:
• “Each game shall theoretically payout a minimum of 80 per cent during the expected lifetime of the game (i.e. progressives, bonus systems, merchandise, etc. shall not be included in the percentage payout if they are external to the game).”
• “A player shall not be exposed to the risk of losing at any one time credits of a total value exceeding €2.”
• “A limit shall apply to the maximum amount that can be won in any game element for non-progressive games, which shall be €1000, and by any progressive prize for standalone progressive games, which shall be €4000.”

Players will be required to register for cards before they can use gaming devices. Provisions regarding these include:
• “The gaming provider may only register a player for a card if the gaming provider or its agent at the venue is satisfied of the player’s identity, VAT number, place of residence, that the player is at least the legal gambling age of 21, and the person is not an excluded person.”
• However, “the gaming provider or its authorised agent at the gaming venue may register a player for a temporary/visitor card if satisfied that the player is not an excluded player and is at least the legal gambling age for the jurisdiction. Players issued with a temporary/visitor card are not permitted to participate in any player/loyalty reward scheme.”

The card system will also enable the maximum loss of each player to be capped at €500 in a 24-hour period. It appears that this will not be a voluntary limit (although players will also be able to set their own limits on the amount they spend, as in many jurisdictions) but will apply to everyone. Once a 24-hour period’s net loss has reached that figure, the individual will be prevented from playing.

Greece, with about 20 per cent of Italy’s population, will clearly represent a much smaller market. But in some respects VLTs could be even more significant there.

Italy, after all, already had hundreds of thousands of slots before the VLTs arrived, and despite a general feeling that VLTs are not detracting from slots revenue the figures discussed above for the opening months of this year in the Italian market suggest that they may in fact be doing just that, albeit not devastatingly (although a possible alternative explanation for the decline in revenue from older AWPs is the legalisation last December of online slots in Italy).

In Greece, by contrast, there are only about 5000 legal slot units (and perhaps the same number illegally installed) so the VLTs could be opening up a new kind of gaming market and lead to the creation of many new venues.

The VLT sector is not one for the faint-hearted or empty-walleted. Deploying VLTs is not just a matter of putting machines into venues. The infrastructure requires all of the following:
• A game server whose tasks include generating the random numbers at the heart of play, managing wins and payments, and remotely maintaining terminals.
• A library of games software.
• Individual gaming machines incorporating bank note readers and TITO printers.
• Inspection units with touchscreens and barcode readers for validating winning tickets.
• Management software for financial reporting, managing loyalty programmes, monitoring possible problem gamblers, calculating tax due, and a host of other tasks.

Key to the design of a successful VLT network – and to regulatory compliance – is the division of functions among the server, the player terminal, and other modules.

The VLT system from Austria’s Amatic Industries, for example, illustrates this. On the game server, protected by 128-bit SSL encryption, the random-number generation is performed and the game outcome is calculated.

The firm’s Multi Lottery Terminal (MLT), meanwhile, provides the interface with the player. It includes a bank note reader and a TITO (ticket in/ticket out) printer, and can also be fitted with an RFID reader for authenticating players’ ID cards or receiving cashless payments.

Complementing these are an inspection unit used by venue staff to validate ticket wins, and online management reporting via a Web interface.

One to rule them all?
Pass the Pint