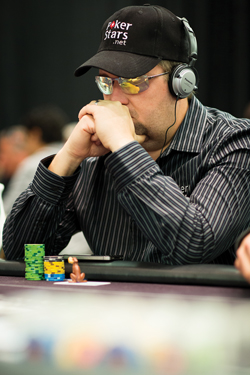 Moneymaker. That singular name represents so much in poker – the card-playing everyman synonymous with poker greatness. Chris Moneymaker’s rags-to-riches tale still inspires every amateur, professional rounder, and gambler looking to hit it big.

Everyone remembers the sunglasses and baseball cap, the steely intensity mixed with the occasional blunder from the former accountant. We remember his bustouts of poker legends like Phil Ivey, Humberto Brenes, and Johnny Chan. This Average Joe from Knoxville, Tennessee, made bold moves and big bluffs, and his tenacity paid off – winning $2.5 million and the iconic gold bracelet that is awarded to World Series of Poker champions.

MONEYMAKER &
THE POKER CRAZE
Beyond the implications for the poker world, Moneymaker’s win also marked the last year the event would be held in downtown Las Vegas at Binion’s Horseshoe, where cowboy/gambler Benny Binion had dreamed up the event three decades earlier. Along with the change in location to the glitzy Rio Resort and Casino after the purchase of the series by Caesars, Moneymaker’s effect on poker would be huge – not only transforming the industry, but transforming the public’s view of the game itself.

“Never in a million, bajillion years did I ever think my win would be so big for me or the game of poker,” Moneymaker tells Casino International. His Herculean victory in front of ESPN cameras would launch a card playing revolution, making a game that had its roots on the Mississippi River and in the Old West, a national and international phenomenon. That Old West, outlaw cachet only added to the game’s popularity.

For certain, poker had seen a bit of a media revival in the U.S. and in the U.K. in the early-2000s. Stateside, the World Poker Tour had revolutionized the game with interesting personalities and the introduction of the “hole card camera,” allowing home viewers to see what the players were holding. An even earlier show, Late Night Poker proved popular in the U.K. and had become the first to show hole cards.

The technology changed the game. Viewers loved the drama and being able to see how players played particular hands – whether they were bluffing or laying a trap for an overaggressive foe. Ratings of the WPT on the Travel Channel ballooned and online poker began to experience a boom as well. Virtual poker and shows like the WPT began the change and burgeoning popularity of poker, and No Limit Texas Holdem specifically. Suddenly, poker was not seen as a seedy game played in a smoky back-room somewhere in Texas. It was cool, and even celebrities joined in on the action.

In poker terms, this all created a “monster pot,” that kick-started the rise of poker that continues to this day. Casinos across the country opened up poker rooms – a few seeing the rare occurrence of shipping in poker tables in place of slot machines. And Moneymaker’s win was Phoenix rising from Atlantis. The intrigue, the Rocky-like story, the massive bluff heads-up against poker pro Sammy Farha – the story had it all.

“He was the right guy at the right time in the right place,” says Caesars Vice President of Communications Seth Palansky. “Central casting could not have scripted it any better. A well-known made for TV pro against the ‘aw, shucks’ everyman from the South.  Moneymaker played his part – himself – to a better ending than anyone could have written.

“The confluence of television hole card cameras giving the ability to see the cards at home, combined with the advent of poker over the internet and an aptly named accountant, collided to produce the most memorable poker event in our 43-year history.”

BEING THE MAN
Back in 2003, poker was still in its infancy. Moneymaker has spoken at length about his situation before the summer of 2003. He had a gambling problem and lost his accounting job in 2002, and only found a job early in 2003. He and his wife also had a newborn baby girl. In April, he entered a $39 online super-satellite on PokerStars.com. The winner advanced to a $600 satellite that offered three entries into the WSOP Main Event, as he explains in his book Moneymaker: Poker Champion.

At the time, he needed some cash to pay some bills, and merely hoped to reach fourth for an $8,000 score. Those first three places merely offered a trip to Vegas and the tournament buy-in – no cash. But as fate would have it, the 27-year-old who had earned his poker chops in home games and at casino in Tunica, Mississippi, won the top spot. Soon, he was jetting off to Vegas where he made his amazing run through a field of 839 players, the largest ever poker tournament at the time. The U.S. was instantly poker-mad. The cash, the gold bracelet, the name. The Moneymaker effect was on and gone were his days at an accounting desk.

“It has changed my life an amazing amount. I didn’t want my life to change much, but it was inevitable. I travel the world playing poker as a job now instead of working my 9 to 5,” he says. “My life is so much fun and full of adventure as compared to sitting behind a desk all day. I wouldn’t change it for the world.”

The instant celebrity status altered his life forever. Hobnobbing with celebrities and interesting people became an unexpected part of his life, he says. PokerStars became a sponsor, and that along with his winnings allowed him to play poker for a living.

“The positives include living a pretty care-free life, traveling the world, doing what I love for a living. Can’t really think of a negative,” he says. “I have represented PokerStars since I won the Main Event in 2003. I love my relationship with them, they are a great company and give me flexibility to work the schedule I want and give me time with my family. They have grown so much in the last ten years and it has been great to see and be along for the ride.”

Amateurs and pros alike have a lot to be thankful for Moneymaker. Canadian businessman and poker player Calen McNeil took home his first gold bracelet this summer at the WSOP and considers Moneymaker as one of the reasons he got into the game.

“His win brought poker into the mainstream so people started talking about it, and it became sexy to play. I got caught up in the hype, which allowed me to feel good about dedicating the time to learn the game, which through practice has earned me a lot of money and a WSOP bracelet. Without Moneymaker, this doesn’t happen,” he says. “He’s a fantastic poker ambassador – a really good poker player and a very pleasant guy at the table. The great part of this game is that anyone can sit and play with a pro and legend like Chris. Some pros are not that pleasant, but Chris is a true leader and understands his role.”

POKER FUTURE
Poker boomed throughout the 2000s and has continued to grow. Despite the effects of Black Friday on the game (April 15, 2011, when the U.S. federal government effectively ended online poker in the United States), the game has continued to grow including the WSOP and WPT. Now a global game, tours flourish throughout the world including the European Poker Tour, Latin American Poker Tour, and numerous others including several within the U.S.

Online poker continues to grow outside the U.S. and recent efforts at state-by-state legalization within the U.S. have proven successful in Nevada and some others. Moneymaker himself sees America’s favorite game rebounding and online poker being legalized on a larger scale at some point.

Beyond the WPT and WSOP, poker continues to be popular on television with networks throughout the world broadcasting tournaments and even high-stakes cash games. Transforming from boring smoke-filled rooms without hole cards being broadcast on TV to a sporting event-like atmosphere has continued to help further the game. And despite Black Friday, even some networks are betting on poker. In the U.S., NBC brought back the popular National Heads-Up Poker Championship in 2013.

“I think poker has a bright future, “ Moneymaker says. “It has proven that the game is not a fad. It is incredible to see how much the series like the EPT and others have evolved and how well they are run.”

At the tables, Moneymaker’s effect on the game proved lucrative to the old pros and Texas road gamblers who sought out high-stakes action. Poker legend and 10-time WSOP bracelet winner Doyle Brunson says the action helped propel the game and fatten some pros’ wallets – not only at the tables, but through sponsorships and endorsement deals. Through it all, Brunson also says Moneymaker has remained down to earth.

“Chris’s win created new players, mostly on the Internet, but that transferred to the live games too,” Brunson says. “I think he’s a very nice guy. He doesn’t seem to have lost his identity. He hasn’t gotten in over his head like some of these guys who become big shots. And he’s a lot better poker player than he was then.”

While he may spend much of his time on the road, Chris Moneymaker lives a pretty normal life – taking the kids to school, exercising, running errands with his wife, and things every average father might do. But on the road, Moneymaker hits the tables and is still recognized quite often even a decade after his triumph.

“On the road, I am constantly playing poker, doing interviews, and doing commentary,” he says. “I am recognized almost every day, and for the last nine years or so it is almost always, ‘Where do I know you from?’ Everyone knows me from somewhere, but can’t remember where. When I tell them, they immediately make the connection.”

No doubt Chris Moneymaker still has quite the poker face.

Red Or Black
Has US casino gaming reached saturation point?