Mentor changing the way we play? 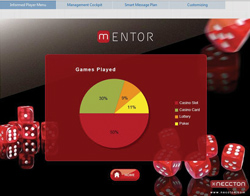 Responsible gaming is always at the forefront of the gaming industry but mentor aims to put an extra level in to allow players to make their own choices; mentor basically acts as a wake-up call if problem behaviour traits become apparent in play, asking the player if they want to carry on and using imagery and information to help the player understand their choices. mentor also provides operators with a lot of useful insights into player behaviour which in turn can be used to improve player experience.
Michael Auer explains…

Casino International: What does neccton do?
Michael Auer: We specialise in business intelligence, customer relationship management and big data analysis, you could say. So we support companies when it comes to managing their data, to retrieving insights about customers from their data. One aspect of our business is gaming, so we support gaming companies when it comes to improving their customer experience.
A couple of years ago we stumbled across the field of responsible gaming, and as a result developed  a software called mentor, which can be used by either online gaming companies or companies which make use of player cards. The software supports and encourages players to make healthy gaming decisions and helps them to avoid risk or problem gambling.

CI: So it helps players to make a choice?
MA: Yes, it does. Information is provided to the player visually as well as numerically. Additionally the system analyses player behaviours and as soon as it detects significant changes, like someone increasing their stakes, increasing playing time or switching to a riskier game, the software provides personalised messages to the players telling the this information and asking, for example, “Are you sure you’re not playing for longer than you originally intended to?” The player then has tools to investigate their gambling behaviour. The system does not exclude players, it simply provides information; it does not identify problem gamblers in a clinical way, it is entirely based on the concept of informed player choice. This means that providing information helps players to stay healthy or make a change if they see they might be on the way to becoming a risk gambler. We make use of the concept of Motivational Interviewing which has proven to be successful modifying gambling behaviour.

CI: You did a study with Professor Mark Griffiths, Director of the International Gaming Research Unit at Nottingham Trent University in the UK – tell us about that.
MA: The study started in 2008, and I met Professor Mark Griffiths at a conference. We decided to explore an idea with an arrangement where we had the resources from a technical point of view, and he is the expert in problem gambling and many other related behavioural fields. He provided us with what we should do in terms of a framework, and we provided the technical expertise. I have been working on my Ph.D with him and have published papers with Mark too.
To us it’s very important that mentor is based on a scientific foundation and is not just analysing data; the way it analyses, and presents information to the player numerically or visually, the message it sends to the player, is all based on scientific knowledge. Previous studies and other tools were and are often imprecise. We work on publications that show our approach is working; one publication is about the effect of voluntary limits on gambling behaviour. We did one analysis with the data from Austrian Lotteries, who are the only internet gaming operator in Austria. In return for using our software, we used their data to publish scientific papers. We discovered that if players choose to set voluntary limits, regarding their cash in amounts, or their playing time, it had a lot of positive long-term effects on their gambling behaviour. If you’re a high-intensity gambler and you choose to limit yourself, of course you might choose to continue to play the same way as before, but we have found this is largely not the case, and it has had an effect on the kind of games these people play as well. For example, poker players might spend a longer time playing but not spend so much money because their bets are quite low; but if the time were to be a problem, and they decided to limit their own time, it has a positive effect on their future gambling behaviour.
In another paper we have just submitted for review, we have investigated the effects of a pop-up message which appears after a player has been on a slot machine for a certain time. The findings until now have been quite ambivalent; most of the findings that have been published so far are based on experimental studies, so none of the researchers have had access to the wealth of data that we have. What we found is the pop-up message does have a significant effect so a significant number of player do stop after receiving the message, compared to the period of time when the pop-up message was not in use for that operator.

CI: So mentor could be used with a player-tracking system in a land-based casino or with any online casino?
MA: Any online casino could immediately make use of such a system because an online casino would have to track player behaviour anyway; land-based casinos can only use the system if they have player tracking in place, otherwise the statistics for the individual player would not be available for the system to analyse. Another important aspect is that mentor can and should be used by operators to gain more insights into their player’s behavior. This knowledge can then be used to improve player experience. From that point of view the system can also be viewed as a Customer Relationship Management (CRM) framework.  And many jurisdictions, e.g. Germany, clearly describe that operators have to actively analyze their players. With mentor all that information is easily accessible.  Casinos learn which players tend to play riskier and also how to advice those players appropriately and which actions to take.