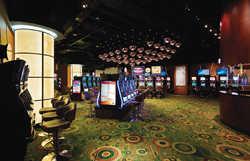 It is a hot Sunday afternoon in the highly populated Fai Chi Kei area. Several people come in and out of the Yat Yuen Canidrome Slot Lounge, at the Canidrome.
Ms Liu (not her real name), 49, is leaving the venue. She looks upset. She stops at the main door, counting the money she has won.
“I’m addicted,” she says.
Ms Liu is a cleaning worker. She is on sick leave, after she was involved in a car accident just a couple of days before. The stitches on her upper lip are still there.
“I still come here, always. I was here from 8am until now.”

Ms Liu says she lost MOP2,000 (US$250) the day before on the slot machines. She returned to win back some of the money. So far, she has only managed to win MOP50.
Mr Ng (not his real name), 42, is also leaving the Yat Yuen Canidrome Slot Lounge. “I took a short break from work and I came here to play slots and other games. Sometimes, I come only to have some drinks,” he says. Drinks at the slot parlour are free.
Mrs Chan, 38, and her husband have also just finished gambling. “I come here once a week when I have the time, mostly when I’m off duty,” she says. Mrs Chan works as a cleaning worker in a local casino.

Deadline nearing
These gamblers will soon lose their favourite gambling venue. The Yat Yuen Canidrome Slot Lounge is among those slot-machine parlours that must close or move by November 26, after new rules to ban slot-machine parlours in residential areas were enacted last year.
The new regulations ban slot-machine parlours unless they are inside five-star hotels, in non-residential buildings within 500 metres of a casino or in resorts that are “not integrated in a densely populated area”.
The slot-machine parlours affected by the new rules include the Yat Yuen Canidrome Slot Lounge and the Treasure Hunt Slot Lounge, both run by SJM Holdings Ltd. The other three slot-machine parlours that must close or move are the Mocha Lan Kwai Fong, Mocha Marina Plaza and Mocha Hotel Taipa Best Western, all run by Mocha Clubs, a subsidiary of Melco Crown Entertainment Ltd.
As of mid-last month, only SJM Holdings’ Treasure Hunt Slot Lounge had suspended operations, a spokesperson for the Gaming Inspection and Coordination Bureau told Macau Business. The venue, comprising 123 slot machines, suspended operations in May, according to a SJM Holdings’ filing to the Hong Kong Stock Exchange.
The Gaming Inspection and Coordination Bureau spokesperson says that if the remaining four slot-machine parlours don’t move or close by the deadline, the regulator will suspend their operations “immediately”.
Macau Business contacted SJM Holdings and Mocha Clubs for details of their arrangements to comply with the new rules, but had not received a response before going to print.

Minor impact
Melco Crown stated in its 2013 interim report, issued recently, that it has already obtained government approval to relocate its Mocha Marina Plaza operations, in the city centre, to a nearby building. The company is “currently in the course of identifying suitable locations” for Mocha Lan Kwai Fong and Mocha Hotel Taipa Best Western.
SJM Holdings chief executive Ambrose So Shu Fai told reporters last month that the gaming operator was still looking for “appropriate” new places to put its two slot-machine parlours. Mr So said the company would close its parlours temporarily if it failed to find new places to put them by November 26.
He said the closure of the slot parlours would do negligible damage to SJM Holdings’ business. Union Gaming Research Macau estimated last year that the closure would cut company earnings by less than one percent.
In the first half of this year, SJM Holdings’ overall slot machine revenue dropped by 5.7 percent year-on-year, to HK$725.4 million (US$93.5 million). The company operated over 3,400 slots in 14 casinos and one slot-machine parlour at June-end.
For the second quarter of this year, net revenue at Melco Crown’s Mocha Clubs was US$37.2 million, up 6 percent from the same period a year before. The number of gaming machines in operation at Mocha Clubs totals approximately 2,000 across 10 Mocha Clubs venues.

‘Crack cocaine’ of gaming
Most slot-machine parlour goers contacted by Macau Business say they agree with the rules to ban slot-machine parlours in residential areas, but some say they will lose a source of entertainment.
Experts on responsible gaming applaud the ban, but they warn it is not enough to prevent problem gambling here.
The head of the Institute for the Study of Commercial Gaming at the University of Macau, Davis Fong Ka Chio, says banning slot parlours in residential areas is a positive move. He says it can help reduce gambling rates among retirees and housewives.
However, Mr Fong notes that Macau is quite small and gambling is still easily available. The ban alone won’t be enough to curb problem gambling here, he says.
A specialist in gambling behaviour at the University of Macau, Desmond Lam Chee Shiong, says the new rules provide an additional brake against excessive gambling, by limiting access to gambling venues. “The new rules make it less easy for problem gamblers.”
Responsible gaming experts often dub slot machines the ‘crack cocaine’ of the gambling world because they can become highly addictive.
Bonnie Chang Mei Fan is in charge of the Sheng Kung Hui Gambling Counselling and Family Wellness Centre. She says the rules on the location of slot-machine parlours should be stricter.
“If slot parlours and betting outlets could all be relocated out of densely populated areas, and if gaming advertising became more regulated, reducing its presence near schools and residential areas, it would effectively help mitigate problem gambling.”

Female addicts
Mr Wong, 25, has just come out of the Mocha Lan Kwai Fong slot-machine parlour, near the Macao Polytechnic Institute. He doesn’t live in the area.
“I work in a casino nearby and I come here to have fun,” he says. He states the new rules to ban slot-machine parlours in residential areas won’t affect his gaming habits.
Ms Chang says the number of problem gaming cases related to slot machines at her gambling counselling centre has stayed stable since its opening, in 2007. She says more women suffer from this kind of addiction.
“Because women are more emotional, they start gambling when they cannot successfully cope with their problems or with stress. Slot-machine parlours are closer to residential areas, and slots are easier to play.”
Ms Chang adds that slots have low minimum bets, allowing women to gamble for long periods with little cash. “They can get temporary relief from their problems while enjoying the excitement of gambling.”
The Social Welfare Bureau’s Resilience Counselling Centre for Problem Gambling received 35 new cases from January to August this year. Five were related to people addicted to gambling on slot machines

A rose by any other name…
Latino America