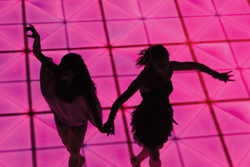 For centuries, Americans have socialized with their peers, but the saloons of the American West during the 1800s started a trend of meeting in a designated entertainment location outside the home. Despite Prohibition, improved transportation launched nightclubs with entertainment in the 1920s.
The post-World War II late 1940s/1950s society patronized nightclubs with bands and dancing that competed with movies and new televisions. In the 1960s/1970s, the pulsating beat of rock and disco music predated today’s glitzy high-tech mega-clubs that have continued to expand.

AC now a mixed bag
After almost 30 years, Atlantic City lost its East Coast monopoly to several neighboring states. Increased competition meant deep gaming revenue declines. From a $5.2 billion peak in 2006, 2013 gaming figures decreased 45% to $2.9 billion. For years, huge casino property revenues reflected a disproportionate emphasis on gaming over non-gaming amenities, ultimately damaging Atlantic City’s economy.
No more. Under Governor Chris Christie‘s leadership, New Jersey politicians and executives are committed to making corrections. Savvy operators who upgraded their non-gaming amenities are enjoying booming revenues, projected above $1.6 billion this year.
However, some did not. Four casinos will close this year, but multiple potential buyers have allegedly expressed interest in specific buildings.
For years, the Atlantic City Alliance (ACA) tourist organization has aggressively marketed to Mid-Atlantic and New England non-gaming customers. According to ACA Chief Strategy & Communications Officer Jeff Guaracino, independent third party nightclub, dining, entertainment and retail operators are attracting new and repeat customers from changing demographics.
“We see more younger, mobile urban professionals, from 21-35. Having delayed many traditional life expenses, they will spend on their own entertainment. During the winter, some customers may visit for their first time or come several times per month. We must get these bodies into the buildings for their early travel experiences,” says Guaracino.
Guaracino cites several benefits of casino nightclubs:

• Nightclubs set their own hours to balance demand with overhead.
• Guests have hotel options when visiting.
• Cameras and technology enhance safety and security.
• Casinos may offer perks and bonuses in the community.

Some properties have renovated specifically to include sophisticated nightclub venues. After paying $38 million for Golden Nugget in May 2011, Landry’s Inc. spent $150 million on renovations. The completed May 2013 project included converting the former underground bus terminal into the 12,000-square-foot Haven nightclub.
Haven features cutting-edge light and sound systems, plus modern technology for social media and dancing. Their mostly 20s audience wants an open format with celebrity DJs and open space for gambling. Haven’s architecture includes private seating for personal hostesses and VIP bottle service, a must in today’s nightclubs.
Many of Atlantic City‘s most successful nightclubs compete by employing unique gimmicks or themes. Most operators support the competition of multiple profitable clubs to enhance the city’s appeal.
The Tropicana rebuilt dedicated space off the casino floor for Boogie Nights, a retro club playing 1970s and 1980s music for dancing on a huge disco floor. The Boogie Nights entrance has six slots and six tables, all retro-themed for that era. Pena Productions LLC Grand owner David Pena claims Boogie Nights bridges all age gaps, from young people to their grandparents.
Pena says all five Boogie Nights across the U.S. are in casino venues in Atlantic City, St. Louis, Missouri, Lawrenceburg and Evansville in Indiana and Lake Tahoe, Nevada.
“Cooperatively, nightclubs and casinos create a safe environment under one roof for our mostly-female clientele. The bachelorette parties and girls nights celebrations are how I make a living. The women bring in the men,“ says Pena. He contends that since the 1990s, nightclubs have evolved into formulaic “machines” offering amenities like bottle service and specially-priced packages.
“The disco theme highlights rock, dance and funk and our costumed characters dress from that era. I personally study each market to analyze and train the staff. I enjoy working with a casino team because I understand the department dynamics. We gain additional exposure through their marketing,” he says.
Although Boogie Nights is multi-generational, Pena knows twentysomething customers demand their own music. To attract them, Boogie Nights dedicates one night to 1990s tunes.
Successfully mixing concepts may be another solution, as discovered by Starlight Events LLC Managing Member Robert Gans. Operating at the Trump Taj Mahal, Robert‘s Steakhouse is Starlight’s first-class steakhouse; their unique 36,000 square foot adult-themed Scores complex offers “seven venues, seven experiences and one great time.”
These include The Electric Fantasy Club, an 8,000 square foot showroom with beautiful dancers and expansive high-technology features; The Spread sports bar; The Deck overlooking the ocean; the reservations-only Libertine for high-stakes players; The Black Box Cabaret for special events; The Blue Velvet Theater male revue for the ladies and The Distrikit, a “red light” fantasy with private rooms and performances.
“We recognized that customers may prefer different entertainment within separate spaces. No one need interact with the adult activities,” says COO Mark Yackow.
Gans and Yackow view Atlantic City as a convention city, perfectly complementing the Taj Mahal’s vast meeting space. Yackow emphasizes Scores‘ sophistication, saying, “We spent millions on lighting and technology to make Scores Atlantic City’s best nightlife facility. Based on our customers’ reactions, if we could monetize the word ‘WOW’, we’d make a fortune. We target a discerning mid-20s to mid-50s audience and market Scores all 52 weeks.”

Cross-marketing for the win
Scores and Robert‘s cross-markets their dinners with Scores’ graduated admission fees. Affordable package/group deals include bachelor/bachelorette and birthday celebrations, business and other group parties.
Although Las Vegas ranks at the top, some successful nightclub operators have enjoyed greater profits elsewhere. After six years at the Mandalay Bay in Las Vegas, nightclub entrepreneur Ivan Kane opened Ivan Kane’s Royal Jelly Burlesque Nightclub at the new Revel casino in Atlantic City in April 2012. Kane made the deal five years earlier, sticking with the project despite Revel‘s significant pre-opening challenges.
He says, “It was obvious for me to open in a strong summer resort like Atlantic City. The casino operators once ran their own amenities, but have changed to incorporate expert concessions. We reaped benefits compared to a standalone property, thanks to the casino floor’s foot traffic and casino comps.“
Guests from feeder markets like Philadelphia and New York City joined Royal Jelly‘s local customers. Kane says he operated a “niche in nightlife” with its highly-produced burlesque shows with live bands, dance party and DJs.

Royal Jelly
Nightclubs typically operate on weekends, but Royal Jelly had added a daily Go-Go Bar & Party Pit. After hours at 2 a.m., Royal Jelly began its Rock n Roll burlesque extravaganza, with six dancers and a live rock band.
“Our demographic was 60% women, ages 21-40, who loved watching our sexy, highly-choreographed performances and light shows. The bachelorette parties were great fun as the ladies went on stage between sets to perform and fulfill their fantasies. Bottle Service reservations was available for bachelor, bachelorette, birthday and VIP Packages. Our dancers even provided burlesque lessons on Saturday and Sunday afternoons,“ says Kane.
[EDITOR‘S NOTE: Revel closed prior to publication. Kane‘s expertise and comments reflect how a successful club can help a property’s overall revenues. He is exploring alternative options.] As a national company, Caesars Entertainment has numerous nightclub winners. The Pool After Dark at Harrah’s Atlantic City placed #17 on the Nightclub & Bar magazine’s “Top 100” roster, earning $15-$25 million last year. Admitting that Las Vegas is three to five years ahead, Director of Nightlife Operations, Strategy & Development Eastern Division Howard Weiss has shaken up the excitement at The Pool by promising a special experience.
“Our 90-foot glass dome over the pool is unique to the East Coast. The space accommodates 3,000, and we must fill it to look good. We incorporate a top 40s music format, great DJs and celebrity appearances. At 2 a.m., anyone may jump in the pool for a swim. We may also run volleyball tournaments. Every few months we have a promotional day, from noon-4 a.m., to start the party early,“ says Weiss.
The Pool’s special amenities include 18 cabanas, five hot tubs, eight day beds, 16 tables and VIP bottle service for groups. Customers may gamble at The Loft on the second floor.
Weiss says, “To pay the price, groups will combine their assets to spend more hours and experience the exclusivity of a reserved VIP location. We cater to bachelorette parties and the women can decorate their cabana. It feels like Las Vegas, but is easier to travel here and enjoy the summer experience at the Shore.”

New directions
Gaming is evolving, particularly as Nevada and New Jersey operate Internet gaming programs. Therefore, it is critical to attract and retain new and repeat customers. Younger visitors live in a more spontaneous manner, so casino nightclubs must create enhanced sensory, memorable experiences. These venues generate billions annually – across all demographics – and demand the talents of the most sophisticated, professional operators.