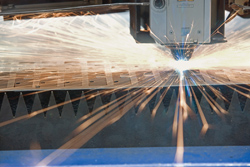 They have their own carpentry, make their own gaming boards and are fundamentally self-sufficient in terms of the manufacturing process. As the company’s slogan states, Novomatic really is leading the way in the gaming industry. Casino International recently took a trip to Austria to take an in-depth look at the ‘nuts and bolts’ of how Novomatic’s high-tech factory operates.
Novomatic has been around since 1980, when it was founded by Professor Johann F. Graf; the company has grown and grown since those early days, and is now a global gaming giant, exporting to more than 80 countries, with more than 215,000 gaming machines working in more than 1,400 locations around the globe. Everything Novomatic touches seems to end in success, to the extent that recent years have seen a major expansion of the company’s manufacturing headquarters in Gumpoldskirchen, near Vienna.
Jens Halle, Managing Director of Novomatic’s commercial subsidiary, Austrian Gaming Industries GmbH, said of the expansion: “It has been necessary to expand our headquarters in Gumpoldskirchen, because of the massive growth we have enjoyed in the last few years. We have around 900 employees on this site, and we have consolidated and streamlined our processes so everything is in one location. By boosting the headquarters on an additional footprint of 56,000 sqms we have increased production capacity and dramatically improved working conditions for all of our employees, so it has been good for everybody.”
One key aspect of Novomatic’s attitude to manufacture is what the company describes as ‘vertical integration’ and it’s part of what makes the company unique in our industry. In short, they produce everything you could possibly need to run a successful gaming operation, from the gaming products themselves, right through to the skills needed to outfit a venue.
There is no greater proof than the huge number of gaming venues outfitted by the company that are already succeeding – and this includes all of Novomatic’s Admiral locations, which can be found throughout Europe. Jens Halle explained: “Admiral gaming locations are fully equipped by our carpentry teams, everything from furniture, to paneling, and of course we make the gaming equipment.
“It means we can very quickly equip our own operations. Through our planning office we can do a layout very quickly and send our people to complete the project. We have more than 1,400 gaming operations worldwide, of all sorts: from small slot arcades to full-fledged resort casinos. The latest statistics show that every nine days, more or less, we open a new gaming operation.”
This must keep Novomatic’s carpenters very busy!

Carpentry
Carpentry is not a new part of the company, either, having been part of Novomatic for almost the entirety of the company’s 30-year history. Jens added: “Our carpentry division is one of the biggest and most modern facilities of its type in all of Austria. In the beginning they were part of the design and development of slot cabinets; in the early 80s lots of markets used wooden cabinets for gaming machines. Also in the 80s, we had outsourced production in Hungary, when it was still a socialist country, for occasions when our own carpentry division couldn’t handle the workload, so we had two sources.”
Interestingly, this part of the company has been instrumental in some famous gaming developments. Jens told us: “Carpentry has been important for the development and design of products. For example, in electronic multiplayers; Novomatic was the first to bring out an eight-player roulette island, which has been a great success internationally. Such layouts are available now all over the world from different manufacturers but our carpentry department in Austria designed that original layout.”
It’s not just there for their own operations – though that clearly has them pretty well occupied – they invite work from third-party customers, too. “We also have a complete planning department, mounting teams – it’s a full service operation as we can help third-party customers as well. It’s a smaller part of the business but it is growing. For example, we can build accessories like signs for slot operations; last year we sold over 3000 signs just to the German market,” said Jens. “Of course, cabinets are no longer made of wood, so our carpenters now focus on equipping gaming operations, hotels and headquarters worldwide, as well as gaming accessories.”

Gaming Boards
Unusually for a gaming company, Novomatic has been manufacturing its own gaming boards since 1999. Jens explained that this was at the time the Coolfire I gaming platform was introduced, and incredibly this board is still supported. He said: “We have manufactured over 140,000 Coolfire I machines – and they are still supported! Some of our own operations still use machines running the Coolfire I platform, and of course our customers are using them too, so it makes sense to be able to support them. In fact, that longer support is a part of the reason for manufacturing the boards ourselves, but the main reason is to protect our intellectual property so we don’t have to give any board layouts or designs to 3rd party suppliers.
“The markets for boards are quite volatile, and this means we can develop the boards our own R&D people need in terms of computing power, chips et cetera.”
“As we are the biggest gaming manufacturer in Europe, and one of the biggest worldwide, we have the economy of scale, so the quantity in production mean we can absorb the extra cost of making the boards in Europe and it makes commercial sense.
The company does have a back-up plan though, Jens added: “If we have a board designed and ready to manufacture in-house, today we always have in place a plan ‘B’, an outsourced production line, just in case there are any problems in design or manufacturing.”
In keeping so much talent in-house, Novomatic is in a great position to continue its global expansion, as all of the tools they require are immediately to hand. This means they are not at the mercy of the same supplier pressures many other companies feel, especially in periods of continued global economic uncertainty. The world really is their oyster… and, as the slogan that Novomatic has used for many years says, ‘Novomatic leads, others follow’!