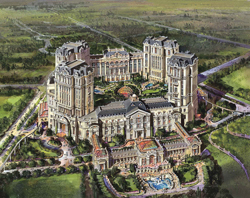 SJM Holdings Ltd was the last of Macau’s six casino operators to break ground on a casino-resort in Cotai, but the company says it is ready to raise the stakes there with its Lisboa Palace development.
Construction of the Lisboa Palace casino-resort began last month. SJM Holdings has increased its budget for the project to HK$30 billion (US$3.9 billion), HK$5 billion more than announced before.
The company said the increase was due mainly to higher construction and labour costs. Another casino operator, MGM China Holdings Ltd, also increased the budget for its Cotai project recently, to HK$23 billion up from HK$20 billion, because costs have risen.
SJM Holdings says the Lisboa Palace will have an East-meets-West feel which will pay homage to the city’s history. The Lisboa Palace will bear the signature of United States architects WATG, who were behind the Venetian casino-resort in Las Vegas and the MGM Grand Sanya hotel on Hainan. WATG say their design is a fusion of inspirations taken from 17th century and 18th century royal residences in Europe and from traditional Chinese motifs.
The plans show a complex somewhat resembling the Palace of Versailles in France. Other inspirations include the Louvre museum in Paris and the Casino de Monte-Carlo. Traditional Chinese motifs will be features of bas-relief panels, windows and statues.
But SJM Holdings says the Lisboa Palace will not be an imitation of anything. “We are not copying others. This is very original and authentic,” SJM Holdings chief executive Ambrose So Shu Fai said during last month’s groundbreaking ceremony.
Mr So had a dig at SJM Holdings rival Sands China Ltd, which has plans for a half-scale replica of the Eiffel Tower at The Parisian, its fourth development in Cotai, due to open next year. “The Eiffel Tower is a very strong icon. But why can you not go to Paris and look at the authentic one? Why do you need to have a replica here?” he said.

Centre of gravity
SJM Holdings still has to iron out some wrinkles in the project. It has yet to put the finishing touches on a deal to co-develop land near its Cotai plot that SJM Holdings executive director Angela Leong On Kei controls. Ms Leong is the fourth consort of SJM Holdings patriarch Stanley Ho Hung Sun. Her land can be used only for purposes other than gaming.
The SJM Holdings plot in Cotai covers less than 70,500 square metres, making it the smallest of all the plots in Cotai held by gaming companies. The deal with Ms Leong would allow SJM Holdings to triple the amount of land available to it in Cotai and so build facilities to supplement those in the Lisboa Palace. The company and Ms Leong hope to do the deal this year.
The SJM Holdings plot is adjacent to the Macau Dome. The main access to the plot is from the south, where Ms Leong’s land lies. On the north side, the SJM Holdings plot backs onto the site of Wynn Macau Ltd’s Cotai project.
Union Gaming Research Macau Ltd says having the Lisboa Palace’s main entrance on its south side could allow the casino-resort to develop its own centre of gravity “by feeding off of the significant amount of non-gaming amenities it will develop” on Ms Leong’s land. Having the main entrance on its south side would also mean the Lisboa Palace’s frontage would not face the back side of the Wynn Macau casino-resort in Cotai.

All things Latin
SJM Holdings owns the Hotel Lisboa, Macau’s oldest casino-hotel, which opened in 1970. The company also owns the Grand Lisboa casino-hotel, which opened in 2007 just across the street from the Hotel Lisboa.
Union Gaming Research does not consider the re-use of the Lisboa brand name for the Cotai development excessive.
“We would have been disappointed if the Lisboa name was left out of Cotai. We believe that the Lisboa name has exceptionally high name recognition with mainland visitors to Macau and should result in a natural attraction to the site,” it says.
The Lisboa Palace will not be the only casino-resort in Cotai with a French theme, but Union Gaming Research says this does not matter because French themes are aspirational and resonate well among mainlanders.
The Lisboa Palace will yield a floor area of more than 521,000 square metres and more than 77,000 square metres of parking space. It will have 2,000 hotel rooms in three hotels.
One of the hotels will be Asia’s first five-star Palazzo Versace hotel. SJM Holdings and Italian fashion house Gianni Versace SpA signed a deal in August allowing the hotel to use the Versace brand name. Gianni Versace will design the 270-room hotel and SJM Holdings will build and operate it.
SJM Holdings is negotiating the use of another fashion brand name, of a stature similar to Versace’s, for another 270-room hotel. SJM Holdings will manage the third hotel, to be called the Lisboa Palace Hotel, which will have 1,450 rooms.
The Lisboa Palace casino will have space for up to 700 gaming tables and more than 1,200 slot machines. The gaming floor will cover about 27,000 square metres. But non-gaming facilities will occupy more than 90 percent of the resort, SJM Holdings says.
The resort will have 34,000 square metres of shop space in a themed shopping mall, and 36,000 square metres of space for restaurants and entertainment facilities. It will have a wedding pavilion and a multipurpose theatre.
The Lisboa Palace is due to be completed by 2017. Then all SJM Holdings will have to do is staff it. At the groundbreaking ceremony, its chief executive urged the government to consider letting casinos employ migrant workers as croupiers. Mr So argued that this would allow Macau permanent residents working as croupiers to move up the career ladder.

Last, but not least

SJM Holdings chief executive Ambrose So Shu Fai does not believe that being the last of the casino operators to break ground on a casino-resort in Cotai means his company is behind the others in any other respect. Macau Business interviewed Mr So via email and these are edited excerpts of the interview.

SJM Holdings Ltd is the last gaming company to set foot in Cotai. Is the company at a disadvantage?
The Macau market historically grows with new supply and, in 2017, we will have the newest supply in Macau. We do not believe that is a disadvantage.

Does SJM Holdings have enough construction workers for the Lisboa Palace?
We are not anticipating any problems in securing sufficient manpower for construction of the project.

How many workers will the project need once it is completed? How many will be croupiers?
On completion, we expect that the Lisboa Palace will employ approximately 8,000 staff. The number of croupiers will depend on the number of gaming tables in operation. In Macau it is generally about four per table.

How does SJM Holdings plan to overcome the city’s labour shortage? How many migrant workers the Lisboa Palace need?
The government is aware of Macau’s labour needs going forward. We are confident that the needs will be met so that Macau’s growth can continue. At this time we are not disclosing a ratio of imported versus local workers.

How will you finance the construction of the Lisboa Palace? How much of the HK$30 billion (US$3.9 billion) budget has been secured?
The Lisboa Palace project will be funded by a combination of internal resources and debt financing. Currently we have a large amount of cash to apply to the project while we organise debt financing.

How will you coordinate the Lisboa Palace project with the development of the neighbouring plot controlled by Angela Leong On Kei?
We have a coordinated design for the plot of land located immediately south of the Lisboa Palace, but we have no transaction structure to disclose at this time.

Why are you bringing the Lisboa brand to Cotai?
Although we [only] recently announced the decision to apply the Lisboa brand to our presence in Cotai, it has always been a logical choice because the name has been synonymous with Macau tourism for over 40 years.

The Lisboa Palace includes a facility for weddings. How important will this market be for the project?
Our wedding pavilion will be a new and unique non-gaming facility in Macau. We believe this will be a successful element of our business in the future.