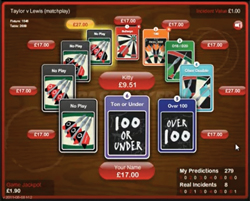 Like so many of the best games in the world, Passoker’s origins came from a simple pub game devised between friends. Passoker Managing Director, Stuart Carr, studied at Trinity College Oxford and San Diego State University and it is was during these years that the idea first came about. “Some friends and I played a game called ‘Pass-the-Pint’ during televised sport in the pub or at live events. Essentially, it was a fun way to have a punt on what was going to happen during the match – a basic version of in-play betting, albeit non-skill and among mates.”
The original pub concept saw a pint full of money transferred from person to person when an incident happened in the sport; whoever ended up with the pint won. Clearly Passoker has progressed since those pub days but the initial idea is clearly still there. “The difference with the online game is that it allocates six different events (e.g. for football: Goal, Penalty/Red Card, Corner, Goal Kick, Free Kick and Throw In) randomly around the table to make the game faster and to bring more players in to the action on every incident. This gives players a gambling interest in what will happen next. There’s instant gratification as a payout will always occur on the next event, but every game is supplemented with a communal kitty that allows one lucky player at the end, the dealer, to scoop the pot.”
Passoker’s not just a football game though; it works with virtually any sport around the world and it plays to all sorts of other television programmes, including soaps, reality TV and even election debates. “From our point of view, the more sports the better!” says Carr. “They all play to a different pace, making every game of Passoker unfold at a different speed. For example, darts has the fastest payout rate at around 8-10 seconds, whereas rugby union can pay out slower if multiple phases occur; so, it has the potential to suit all types of players.”
Passoker has also recently been released on an array of soaps, reality TV programmes and game shows. This has attracted significant attention among players and operators as these events previously had no in-play betting possibilities. For these games players are still allocated cards randomly on what will happen next, only in a soap it might be what scene will occur next; for reality TV it might be on what is said next; for game shows it can be on the decisions of the contestants or how much they win.

BACKGROUND NOISE
Carrs’ original professional background was some distance from the gaming industry. “Before setting up Passoker in 2010 with my father, I’d spent the six previous years trading and brokering in the financial markets; prior to that I was a professional tennis player on the ATP Satellite Tennis Circuit. The downside to launching a product as a newcomer is that we had to start from scratch and work exceptionally hard to get noticed. However, it meant we were able to tackle everything from a fresh viewpoint.”
Viv Anderson (a hugely successful footballer of the 1970s-90s) has been involved with Passoker since the beginning as a partner and shareholder. “Owing to our own lack of experience in the gaming sector, our strategy was to attract someone to the company that would help get in front of operators,” explains Carr. “Viv was targeted owing to his bookmaker links (plus ‘Anderson’ placed him top of our alphabetically-ordered shortlist!) Thankfully he came on-board and has been involved at every step of the way since.”
Taking Passoker online was never going to be an easy task for an individual already working a full-time job, as Carr explains: “We approached some operators but it was hard to progress things with no development team in place. The response was always positive – people liked the idea but it’s hard to show your vision without a good prototype. It was really just a concept. Our first breakthrough came after we had approached Viv. He knew Victor Chandler and a week later we met with their board, including Victor, in Gibraltar.” However, things still didn’t move as quickly as Carr had hoped: “There is a general reluctance when it comes to new concepts, plus integration is generally not a quick process, but it has been a steady forward movement.”
Ultimately Stuart took the plunge and gave up his job. His father founded the development team and not long after they secured investment after a winning appearance at Start-Up Launchpad at EiG 2010.

ONWARDS
Though the core development of a suite of products is now finished (available on William Hill and Victory Chandler, and shortly to arrive at JenningsBet) Carr and his team are still working with their partners to fine tune the perfect format for the games. “Honestly speaking, the ideas that have sprung from the initial core product have bigger potential, and we’re now in the great position of having an operational platform that allows us to build out quickly without the need for lengthy integrations. The real strength of the concept is that it’s open-ended with regard to platforms: social/monetised, online/offline, online/mobile. It also works for virtually anything and many games can come out of the core concept that will appeal to different types of players.”
Variants of the core concept are under development, which will deliver a suite of twists on the current game for the player: fast/slow, heads-up, etc. with a smartphone and tablet version also about to be released. “This will be a strong addition to our offering,” says Carr “as it provides the opportunity to go back to the game’s roots – being played at a live event or in a pub. The fact that Passoker is passive is a big seller. The player can check in periodically to see how they’re doing but then focus again on the sport. Imagine sitting at Wimbledon, having a look at your phone every now and then and thinking: ‘If the next ball goes in the net I win £20!’ There’s huge potential there. You don’t have to make decisions to bet or concentrate constantly on your phone. You’re there to enjoy the tennis, so why not do that and maybe win a few quid? What’s more, we don’t have to worry about latency. As the game is non-skilled, if the streaming of the sport is delayed, it does not affect our product.”
I ask what Carr what he makes of similar in-play products such as Buzz Sports’ Zone Play: “ZonePlay looks great and is clearly a well developed product. To be honest it’s a very different product to Passoker even though it has at its heart ‘the next incident’. ZonePlay competes against the traditional sportsbook whereas Passoker is non-skilled and is seen as complementary. We therefore have a very different audience. Passoker has also very much focused on the softer gaming audience as we see this as a gap that has not yet been successfully filled in the market. Overall it’s good to see new concepts in the market as it helps to gain traction with new players.”
Carr believes in-running will continuing to grow, with new markets being constantly added for more and more sports. “In terms of in-running games I believe that products like Passoker will work on both the monetised and social platforms in the future and I’m sure that other ideas will surface.”
Next for Passoker is horseracing: “Large parts of the original Passoker remain untapped,” says Carr, “and we have some interesting projects and products in the pipeline. Our next venture is a horseracing concept that has not been done before and I believe this to have real promise. Work has started, and we are looking to release more information later in the year.”