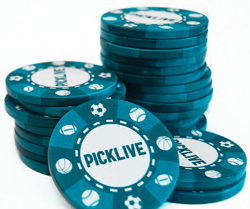 “Picklive starts from the premise that sports betting industry has not really innovated in recent years and hasn’t kept up with the change in what players want from a sports-related betting product.” So says Picklive CEO, David Galan. He believes that the future of betting on sport is all about ‘gamification’ and player engagement… “providing an entertaining and social experience for a player that is centred on the sport they are watching live. This experience is to be delivered as a second-screen experience.”
Picklive is a real-money game of fantasy football which only lasts for the duration of one match. It is delivered ‘online poker’ style, in that you choose a room to play in where you can control the stake and number of players you are playing against. You are competing against the other players in your room where each player has an online persona, and ‘socialising’ while you’re watching the game together is all part of the Picklive experience.
Galan explains: “The idea is that there is nothing more natural than watching a game of football with your mates and betting on the game is all part of that process. Picklive wants to give you a betting and social experience that lasts throughout the whole game, which makes it a very different proposition to a fixed odds bet where you just place your bet and come back after the game. With Picklive the player is kept ‘captive and engaged’ on the Picklive second screen for the full 90 minutes of a game.”

HISTORY
Picklive was originally formed as a spin-off of a London based digital agency. Picklive was acquired by the current senior management team, David Galan and Kfir Kugler in July 2012.  David and Kfir were from an online gaming background and viewed Picklive as an extremely unique piece of technology with massive commercial opportunity which had not yet been exploited or developed. David’s background was originally in investment banking, after which he became CEO of the football pools prediction product, Soccer Millionaire. Kfir has been in online gaming since the beginning of the industry, starting at Empire Online and then transferring to Party Gaming after the acquisition. At Party Gaming Kfir performed various roles, including Head of Latin America. Both David and Kfir passionately believe that player behaviour has shifted towards seeing online betting and gaming as entertainment and ‘gamification’ is part of that process. They see Picklive as the vehicle through which to bring these concepts to the market.
Since the acquisition of the business in July 2012, the product has been further developed and several key strategic deals have been agreed to take the Picklive product internationally and to other sports beyond soccer. Picklive is starting to gain traction and is capturing the imagination of the betting and gaming industry, having recently won Best Betting Operator of the Year 2013 in the Totally Gaming Awards.

RIGHT HERE, RIGHT NOW
Picklive is fully operational in the UK, with a UK gambling licence. “There is a very loyal core player base that returns multiple times per week to play,” explains Galan. “Playing Picklive almost becomes ‘what you do when you watch a live match’ for these players. Both player and industry feedback for the product has been very positive. This has given the management team the confidence to raise significant funding to commence a marketing and development strategy to accelerate the growth of the business.”
With business running in the UK, the Picklive team are now looking to launch in other territories. “When online gaming was made illegal in the US by the Unlawful Internet Gambling Enforcement Act in 2006, there was a specific carve out for fantasy sports,” explains Galan. “The fantasy sports market in the US is large as it’s pretty much the only form for betting that people can do legally. According to industry stats, 35 million people are playing fantasy sports in the US in an industry worth over $2 billion.”
The team are confident that there are no fantasy/social products in the US market quite like Picklive, and the company plans to launch an American sports version of the product within the next 6-12 months. Starting with NFL, the product offer will also ultimately include Baseball, Basketball and Ice Hockey.
“Picklive has agreed a joint venture to launch the products with a large betting operator who has a significant North American business,” says Galan. “This will accelerate the time to market for Picklive and the plan is to become a significant player in the US fantasy sports market over the next three years.”
That’s not to say that the UK product won’t continue to develop during this time: “Picklive is coming to market with a much enhanced product offering for the 2013/14 UK football season,” explains Galan. “The game will have more in-running gameplay elements, including the ability to substitute players in real-time during the games. There will be more football leagues including the major European football leagues, giving players the opportunity to play Picklive every day and turning the business into more of a 24/7 operation.”
Looking to the future, more sports are planned for Picklive: “the concept works across many sports such as cricket, golf and motor racing,” says Galan. In terms of marketing strategy, Picklive is planning a B2B and B2C strategy. They are open to B2B opportunities with existing operators who are looking to drive player acquisition and retention through innovative and sticky content. Galan closes: “One thing is for sure, with the availability of sport-on-demand across a multitude of devices, betting on sport is certain to evolve.  Picklive aims to be at the front of that evolution.”