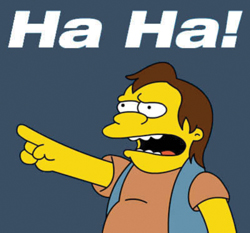 “If a tree falls in a forest and no one is around to hear it, does it make a sound?“ This is a philosophical thought experiment that has delayed students from having sex for decades. However, I have a perhaps more relevant question for you: “If you win an online poker tournament but everyone has logged off, can you properly gloat?”
To my mind there are two parts to a celebration: 1) the internal relief/joy of winning whatever the prize is, and 2) the glorious smug satisfaction of (graciously) shouting “IN YOUR FACE… IN…YOUR… FACE!” at your opponents as you majestically rise above them, soaring gloriously into the sky on a beam of light that transports you to ultimate glory and your own coronation as “Imperial Superb Grand Master of Everything”. Now I know this may seem a bit over the top for a $5 sit ‘n’ go, but who honestly doesn’t want to go “na na na na-na!” in the face of other adults? Sure, shake hands and give it the “nice game buddy” treatment if you want to look like a decent human being, but deep down you know you just want to burn them in the fires of humiliation, starting with their feet and slowly working up.

WTF
The reason for this recent ponder came after a particularly grueling game of online poker. It ultimately came down to me and ‘Milkiman’. Without wishing to sound like Phil Helmuth (a poker player known for a total lack of self-awareness and an ego the size of the Grand Duchy of Luxembourg) I can honestly say I believe I was the better player. This appraisal was born of having watched my opponent splash his way through the game like a chipped-up otter, switching between either heroically folding to glory or luckboxing chips with lots of Ace-King overplay (it’s a poker thing). Anyway, once we were heads-up I had a two-to-one chip lead and felt pretty confident victory would be mine within moments (bwa-ha-ha! etc). Ah, t’were it that easy…
What actually followed was a cycle of play that tested my patience to its utmost. Step 1) outplay opponent, 2) grind away at them until they are almost broke, 3) watch as they realise they’re running out of chips and go all-in, 4) sit back as your superior hand (e.g. A-J, 6-6, K-Q, etc.) takes on their underdog hand (e.g. A-3, 5-5, Q-9, etc.) 5) slap your forehead in disbelief as time and time again they somehow spike a miracle card and come back from the dead, 6) go back to step 1.
This went on for some time. However, after repeating steps 1 thru 6 over and over, I finally managed to get him all-in with Q-7 against my 8-8 and (at last!) my hand held up and I won. Now, had this been in a poker room I’d have pretended to be humble, stood slowly, straightening my tuxedo (or at least making sure my gut wasn’t sticking out the bottom of my t-shirt) and offered him the rugged, handsome hand of a winner for him to take in his unctuous loser’s paw, and then told him to kneel before Zod. As it was, I offered a “Good Game” in the chat box and… nothing. “For a second there I thought you were going to get lucky on me again!” I continued… zilch. “Hello?”… silence. NO! Don’t be gone! I’ve not finished basking in my own glory. I’m not done telling you how it was written in the stars that I would be victorious. In fact I demand that the poker room now bring back everyone that was in this tournament to start with and form a virtual line. I shall then float down this line and everyone can take it in turns to congratulate me. HOW CAN I GLOAT IF NO ONE’S HERE!

BEYOND THUNDERDOME
And so, having recently wondered why on earth anyone would still play live when you can play online, I may have found my own answer. Yes, online gaming is faster; yes you can multi-table; yes you can bounce from game to game, and yes you can play in just your underpants. You can do all these things, but the one thing you can’t do is gloat, and for some of us that’s one of the key reasons to play. We act like we don’t mind when we lose (as long as no one is looking) and we act like it’s no big deal when we win (just as long as EVERYONE is looking). Come on online companies; just add a ‘gloat’ button that broadcasts the beaming grin of a smug winner to everyone online and your work will be complete.