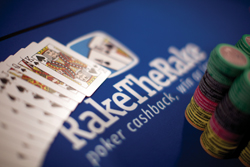 For those not familiar with the subject under discussion, RAKE is a scaled commission fee poker rooms take from every pot as payment for providing their service. RAKEBACK is money returned by a poker affiliate to the poker player who generated the rake in the first place. Some high-volume players can make or break a poker site so rakeback has become a key ingredient in attracting and keeping the big players (as well as keeping the smaller, less successful players happy with their lot). Apart from recorded winnings, a player’s individual rakeback deal became a large part of their boast in the card room bars during the early-2000’s. It’s no surprise then that some affiliates were quick to capitalise on poker’s boom, brokering deals and acting as a middle-man between the players and the sites hungry for their action.
RakeTheRake was one such affiliate, founded by Karim Wilkins and Alan Bristow, bringing experience in Investment Banking, Management Consultancy and Corporate Finance to the gig. Wilkins explains how the company came into being: “RTR was formed in 2004 after I was hit up in a poker room’s chat by an individual offering rakeback. I was intrigued by the concept of getting cash back for my play but the individual didn’t have a website and so I didn’t feel totally confident that I would receive what had been promised.” The random conversation was enough to sow the “I could do that” seed in Wilkins’ head, and shortly afterwards he set up his own website. “I had no web building experience at all,” explains Karim, “so if you look at the original incarnation of the site you’d be forgiven for thinking it had been made by a four-year old child. However, we signed our first member in Dec 2004 and now have over 200,000 accounts.”

SOURCEY
RTR source traffic for online poker rooms and in return they pay a commission. This commission is based on a cut of the player’s stakes (the aforementioned rake). “You can usually see this rake being taken off the table when the cards are dealt,” says Karin. “Typically this is about 5% of every pot. Playing a few hundred hands a month can quickly turn in to a large amount of rake paid. We in turn pass on the lion’s share of this commission to the player in the form of rakeback. In addition we lay on hundreds of thousands of dollars’ worth of extra exclusive promotions each month for our members.”
Though Rakeback didn’t really exist until the latter half of 2004, RTR wanted to give some value back to the player. Wilkins explains: “We wanted to provide access to the best rakeback deals to players accompanied by the highest value of extra exclusive promotions. While other sites have tried to diversify, we have remained focussed and our goal today is to still be the biggest and the best when it comes to Rakeback.”
Like any industry the number of competitors has increased over the past eight years meaning RTR has had to fight harder for market share. In recent years the legislation changes in Europe and the indictments in the US have had the biggest effect on the poker industry and this in turn has had a direct effect on the number of people playing poker and looking for rakeback. These negative changes have brought about the demise of all but the top 5/10 rakeback sites.

CREDIT
RTR CEO Wilkins believes rakeback sites have been far more important to the poker industry than people give them credit for. “As everyone knows, the majority of online poker players are losing players. The industry calls these players ‘fish’, but if the fish don’t turn up on the tables then there’s simply no online poker. Rakeback has ensured that many of these ‘fish’ get subsidised every month. It helps some losing players break even and it helps the breakeven players make a profit. Even a small-time player can get back $30-$40 a month which can make all the difference at the micro stakes levels. Rakeback has kept a lot of online players playing.”
Surprisingly there’s still a large percentage of the online playing population that doesn’t know about rakeback, and reaching these players has become the Holy Grail for all rakeback sites. “Spreading the good word that is ‘rakeback’ is the biggest obstacle to growth,” says Wilkins. “Keeping up with legislation across the world is also an expensive process, but also an essential one.”
As with all areas of poker, the return of the USA in earnest remains probably the biggest area for growth. “Many players were burned by the implosion of sites such as Full Tilt and Absolute/UltimateBet,” says Wilkins. “Hundreds of thousands of players lost their bankrolls and they have (quite rightly) been reluctant to get back on their poker bicycles. There is also still a lot of chat about Asia and South America but that talk has been in the air for several years now and nothing has materialised.”
Wilkins is also quick to point out that rakback is more than just a reward system: “What people fail to realise is that rakeback is just another form of retention tool. Whether you give a player cash, an iPod, a bonus or a live event ticket, they are all just forms of retention. So rakeback is always going to be around and there will always be rakeback sites offering it. There are definitely a few bells and whistles (all top secret of course!) that we are planning to add to enhance the experience, but our core proposition is to continue to provide the best rakeback and rakeback customer service on the market. Our exclusive promotions are still the best in town and our players know that as long as they continue to play through RTR we will ensure they get the best returns possible from month to month.”

IN THE YEAR 2525
I ask Karim where he sees himself and the business in five years’ time. “Hopefully I see it from the deck of a 28 metre Sunseeker just off the coast of Barbados, but it’s more likely to be from a dinghy off the coast of Skegness. Five years is a long time in online gambling. Hopefully by then the USA will be back in the game and the main European countries will have realised that having a European wide network rather than 15 individual country networks will net them five times as much in gambling revenue/tax. Cashback incentives have been around in all walks of life for many years and we do not expect this to change in a young industry like online poker. With that in mind we intend to grow bigger and stronger.”