Join Rich Casino in its biggest tournament of the month, with a series of daily championship races every day and some big money prizes at stake! 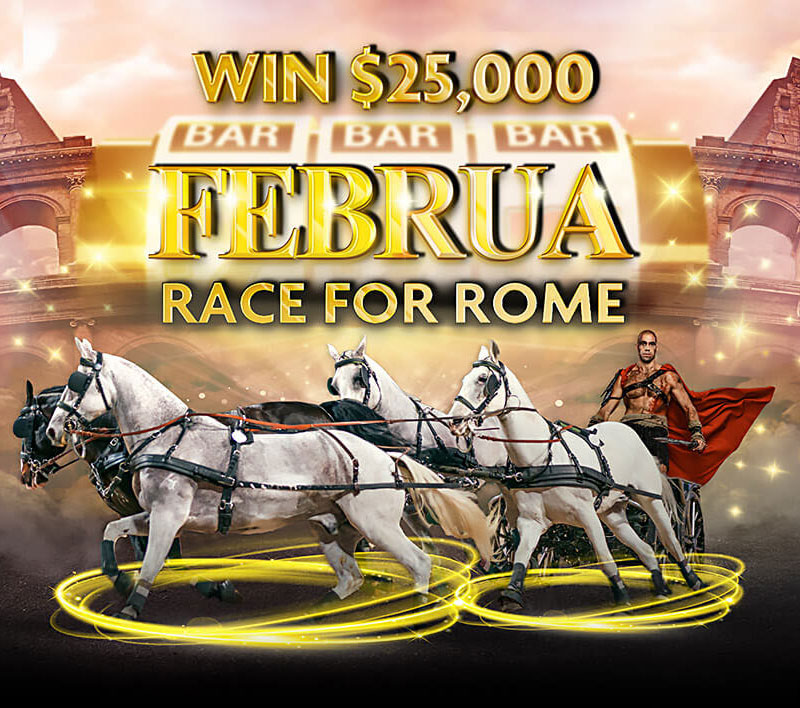 Rich Casino puts pedal to the metal once again with its latest big money promo, Februa – Race for Rome! Named after the Roman month of festivity from which we get the word February, this promises to be a high adrenaline race for the finish line where the player who accrues the most cumulative points will triumph, with prizes all the way up to twentieth place!

As the old saying goes, Rome wasn’t built in a day, so in order to win, players must simply join the Daily Championship Races by clicking the “Races” link on the Rich Casino menu bar and accumulate as many points as possible within the month of February. At the end of the month, the points will be tallied and the players with the most points win either cash or free chips from a total prize pool worth $44,500! This is divided in the following way:

Races are miniature slots tournaments, held on a regular basis. There are low minimum bets, with cash prizes available each individual race. Races are free to join, and whoever accumulates the most points wins the Race. Players can compete in up to four races at once and keep an eye on the fast-paced action from the game window as the interface shows you remaining spins, time remaining, and position on the leaderboard.

The Februa – Race for Rome! Races’ minimum bets vary depending on the hour. Each player is allocated 125 spins and each race runs for 25 minutes. The Roman themed championship conjures images of ancient Rome, charioteers and revellers at the Circus Maximus, and with low minimum bets of under $1, it’s inexpensive, fun to play and easy to accrue points over the course of the month!

How are the races scored? Your points are based upon the result of your spins in the game, and are calculated as follows: Each win will bag you 5 points, with 15 points for 3 wins in a row. Players accrue points for losses as well as wins! 3 losses in a row nets you 20 points and if you make a big win (of at least 10 times your original bet), you will bag an impressive 150 points to boost your position on the leaderboard!

“With so many Races over the course of the month, and with so many points at stake, the chances of making it onto our championship leaderboard and into the big money are very high indeed!” added Gwen.