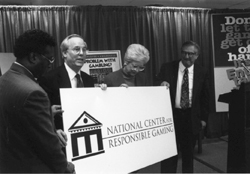 Planning for his June 30 retirement, American Gaming Association (AGA) President/CEO Frank J. Fahrenkopf Jr. admits he never expected to spend 17 years as the public face of gaming. Looking back over his professional life, he says his career’s three distinct phases have each given him extraordinary opportunities, experiences and memories.
From a young small town lawyer in Reno, Nevada, Fahrenkopf’s expanded his professional reach to an international stage he never could have imagined. During his 1980s political career, Fahrenkopf interacted with presidents and royalty, dignitaries and statesmen. Finally, his leadership of the AGA since 1996 has increased it from a small group of industry VIPs to a global gaming force of 513 casino properties in 23 American states.
Fahrenkopf‘s future plans do not include slowing down because he has no intention of “going gently into that good night.“ Fahrenkopf will consult with the AGA through December 2013 to ensure a smooth transition. Well wishers may say farewell at the September G2E expo, which he will attend.

Although born in Brooklyn, New York, Fahrenkopf has always considered himself a westerner. Following a custody conflict in 1949, his father, Frank Fahrenkopf Sr., moved ten-year-old Frank and his seven-year-old sister Linda to Reno, Nevada – the then divorce capital of the U.S. The family established a six-week residency to comply with Nevada’s divorce requirements, planning to ultimately settle in Los Angeles.
The elder Fahrenkopf, an auto mechanic, decided to remain in the sleepy, mountainous gambling mecca of 35,000 that was Nevada’s largest town during the 1940s. Fahrenkopf Sr. found work and raised his two children.
All did not go smoothly for Fahrenkopf. He recalls confronting western culture shock. “I wore cowboy boots, Levis, a blue satin shirt with pearl buttons and a cowboy hat on my first day in school. The boys beat the crap out of me, and then threw me into a mud puddle,” he says.
Following his 1957 high school graduation,  Fahrenkopf served six months in the Army Reserve program in California. The privilege of attending the University of Nevada in Reno (UNR) in 1958 required him to work as a postal employee to pay his way.
Fahrenkopf met freshman Mary Bandoni from Hawthorne, Nevada at a basketball tournament in late 1957 and immediately predicted their marriage. They did marry in August 1962 after his graduation.
Always athletic, Fahrenkopf initially studied physical education and coached youth baseball in college, but graduated with English teaching credentials. However, law school appealed to him after his 1962 graduation and the newlyweds moved to California. Mary worked as a secretary to put Fahrenkopf through Berkeley’s Boalt Hall Law School where he earned his law degree in 1965.
Throughout law school, Fahrenkopf participated in extracurricular campus activities. He and classmate Ted Olson, the future United States Solicitor General during the George W. Bush Administration, joked about being the only two Republicans at Berkeley during the 1960s campus unrest.
“What drew me to the Republicans? I never believed that the phony free speech movement and its leadership promoted free speech. I emerged as quite conservative,” Fahrenkopf says.
The Fahrenkopfs returned to Reno because he recognized the professional advantages of a smaller population. It was easier to make connections and he joined a small firm as a criminal trial lawyer.
His practice grew more political and Fahrenkopf became the president of the Reno Young Republicans and the national committeeman of the Nevada Young Republicans. As the Republican National Committee‘s youngest member, his participation propelled him into the chairmanship of the Nevada Republican Party in 1975.
Fahrenkopf‘s rise continued, first chairing the Western Chairmen and then chairing all Republican state chairmen. His life’s multiple responsibilities included his legal practice, a family with three young daughters and Republican Party volunteer duties.
“I had a purpose and have always believed in community service. The exposure also expanded my  clientele,“ Fahrenkopf  states.
During the 1970s, small state lawyers were generalists whose expertise covered multiple disciplines. Fahrenkopf first encountered gaming as counsel for family who had built the Las Vegas Hilton, the original Las Vegas and Reno MGM hotels and a small Reno casino. He also represented other gaming companies before state regulators.
It was Howard Hughes‘s death in 1976 that launched Fahrenkopf’s national career because his work interacted with Hogan & Hartson – his future firm in Washington D.C. They represented Hughes’s tax issues, but the mogul’s five casinos and land required Nevada counsel.
Triumphing over tough legal competition, Fahrenkopf says, “I survived beauty contest interviews despite objections to my northern Nevada practice. Next came five fascinating years of estate work and frequent travel to Washington.”

Fahrenkopf credits his friend, respected former Nevada governor and senator Paul Laxalt, with his parallel professional and political opportunities. Coincidentally, Laxalt was also best friends with Ronald Reagan, the governor of California from 1967-1975.
“As governors of adjacent states during the same years, they spent time at Lake Tahoe. I knew Mr. Reagan through that relationship and as Chairman of the state Republican chairmen,” says Fahrenkopf.
When Reagan won the 1980 presidential election, the Republican National Committee (RNC) offered Fahrenkopf its chairmanship position. He refused, but did accept their second offer in 1982.
“The 1982 mid-term election damaged the Republican Party. So, when the White House again approached me, I became Chairman of the RNC in January 1983,” states Fahrenkopf.
He traveled to every state and represented all Republican activities like overseeing governors, state legislatures and Congressional members. Fahrenkopf says, “My years of experience running grass roots campaigns helped me organize and train people to win elections.”
Following Reagan’s 1984 re-election, Fahrenkopf agreed to another four years. He respected their relationship and describes a specific protocol between them.
He says, “President Reagan initiated 99% of the conversations. You didn’t just call the White House – it was always arranged. I always publicly and privately called him ‘Mr. President.’
“The  President held a 90-minute Cabinet Room leadership meeting every other Tuesday. The group included the President, the Vice President and the elected House and Senate Republican Party leadership. Unlike today, we only needed a security pass.”
Fahrenkopf frequently traveled with President Reagan on Air Force One. He has framed and mounted his official first flight certificate on his AGA office wall.
Fahrenkopf marvels at his good fortune and front row seat to history as a part of what he calls the “Reagan legacy.“ He says, “I was thrilled to participate in the democracy movement before the Berlin Wall fell, working with leaders like Margaret Thatcher, Jacques Chirac and Helmut Kohl.“
In 1985, Fahrenkopf and former Democratic National Committee Chairman Paul Kirk established the non-partisan Commission for Presidential Debates. The group has conducted every presidential and vice-presidential debate since 1988. Fahrenkopf still co-chairs the Commission.

A NEW JOB COMES HIS WAY

Fahrenkopf resigned from the RNC in 1989 and returned to Hogan & Hartson’s international trade practice. A twist of fate and a chance conversation with Hilton Hotels President Raymond “Skip” Avansino in 1992 was the first step of his AGA career.
Representing the American Pasta Association, Fahrenkopf described the effectiveness of Washington lobbyists and lawyers. He questioned gaming‘s lack of Washington representation, despite billions in capital investments.
Avansino soon organized a national trade association in 1994, hiring Fahrenkopf to prepare legal papers. However, the group stalled until the Clinton Administration proposed a 4% gross receipts federal gambling tax that year.
Nevada Governor Bob Miller, a Clinton friend, delivered a petition with over 30 governors‘ signatures. They feared an extra tax would devastate their state budgets, reliant on gaming revenues.
Fahrenkopf says, “This issue disappeared in 30 days, but they realized they needed a Washington presence. We created the American Gaming Association. I took a one-year professional leave to help and look what happened… I never left.”
Because the job vacancy remained by early 1995, the committee offered Fahrenkopf the permanent job over breakfast.

Since the 1990s, American gaming has exploded, extending beyond just the gaming floor. Technology, labor and other national issues have impacted casinos and their operating communities.
Fahrenkopf states, “In 1995, we aimed to change public perception and eliminate old mob stereotypes. The AGA has always educated Congress and state legislatures of gaming‘s tight regulations and employment opportunities. As gaming has proliferated, we have sometimes taken two steps forward and one step back.
The industry’s extraordinary tax payments clearly demand respect. Executives like the late Terry Lanni, Gary Loveman and others have been good representatives for Wall Street because their public companies are regulated.“
An early AGA challenge was the National Gambling Impact Study Commission Act of 1996. It established a nine-member commission to study the social and economic impacts of federal, state, local and Native American gaming.
Fahrenkopf says, “Following two years of exhaustive travel and nationwide presentations, we earned positive marks.“
How does Fahrenkopf evaluate his 17 years leading the AGA? The public’s overwhelming acceptance of gaming as a highly regulated business fuels his positive attitude. Fahrenkopf proudly points to numerous successes in stopping punitive federal taxes, state taxes and regulations, asserting that many legislators now recognize gaming’s contributions to the communities where they operate.
Fahrenkopf also cites other key AGA achievements. He claims that company mergers and acquisitions have created a mature industry of core companies that survived the 2008 economic downturn.
The National Center for Responsible Gaming (NCRG) was founded in 1996 as the AGA’s affiliated charity. The NCRG has received almost $25 million to conduct quality research for a better understanding and treatment of pathological and youth gambling. Gaming industry contributors, equipment manufacturers, vendors, related organizations and individuals all donate their time and resources.
Globally, the G2E and G2E Asia conventions have thrived. Prior to the 2001 debut of the AGA‘s first G2E expo, trade magazines sponsored multiple trade shows. That year, the AGA went its own way and hosted its own members’ convention.
Fahrenkopf says, “Our shows have only grown more successful. We added G2E Asia in 2007, and are very pleased with the results.“

Although Fahrenkopf decided to retire back in December, 2011, he announced his intentions earlier this year.
“I delayed my announcement in 2012 because I hoped an Internet poker bill would pass. I am disappointed it failed after four years of Senators Harry Reid (D-Nevada) and John Kyl (R-Arizona) working with individual companies. Federal Internet poker legislation is now not a front burner issue. That uncertainty motivated me to give six months notice because a good executive plans for future transition.
“I believe federal legislation will provide minimum standards and consumer protections while also safeguarding against underage and compulsive gambling. Federal pressure is needed to regulate licensing and taxes,” Fahrenkopf says.
Geoff Freeman will succeed Fahrenkopf on July 1. Freeman has 16 years of Washington experience, helping to pass key legislation and promote hospitality industries. Fahrenkopf wishes him well in a tough environment.
“The polarized atmosphere rejects civility and fosters negative relationships. Adversaries once tried cases and then socialized while awaiting decisions. Reasonable people can disagree.
“My father was a Democrat who supported candidates over party. While a Republican, I vote for whomever I consider most qualified,” he says.
Fahrenkopf praises the gaming industry’s people and the AGA board members. He feels the employees on the front line are gaming’s most valuable assets.
He reminisces, “It’s been a great ride for a kid from Airport Rd. in Reno. I’ve enjoyed my life’s legal, political and gaming chapters, and I am leaving on my own terms. A reporter is writing my biography. I will pursue speaking circuit and writing opportunities and may teach at a university.”
Fahrenkopf and Mary will remain in the Washington D.C. area to be near their three grandchildren. They can then also easily visit their other two grandchildren in Connecticut.
One thing is certain… Fahrenkopf will succeed, whatever his path. Someone that accomplished and talented always has much to offer.