Scientific Games Corporation has announced that a total of 22 US and international lotteries are launching its new JAMES BOND 007 licensed games. Scientific Games has successfully extended the intrigue and excitement of the JAMES BOND 007 brand across its gaming entertainment ecosystem, including lottery, social and casino products. 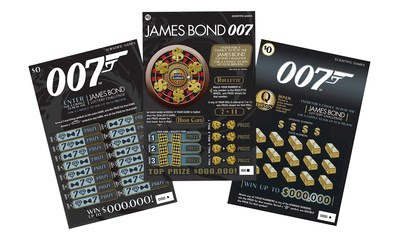 The lottery games coincide with the 25th James Bond film, No Time To Die, to be released in theatres globally starting April 2, 2020 in the UK and April 10, 2020 in the US. First to launch JAMES BOND 007 games were lotteries in Massachusetts, Maine, Pennsylvania, Israel and Switzerland. Thus far, three lotteries will sell the JAMES BOND 007 games to players both in retail stores and online/mobile.

With over $43 million in retail sales in 19 weeks, the Massachusetts Lottery’s $5 (USD) JAMES BOND 007 game sold out and Lottery officials said the game performed very well.

In the U.S., 11 state lotteries are set to participate in Scientific Games’ James Bond Lottery Challenge linked game, a second-chance offering winners and their guests a five-day/four-night trip to Las Vegas in 2021 where the prize winner will have a chance to participate in the James Bond Lottery Challenge. Winners will have a chance to win a cash prize up to $1 million or more. In addition, the prize winners shall participate in a Bonus Event, to win a bonus cash prize up to $100,000.

Ed Farley, Chief Marketing Officer for the Massachusetts Lottery, said, “The Mass Lottery is very selective with licensed games, but JAMES BOND 007 tested strongly in focus groups across a wide range of our players. We were confident that Scientific Games’ elegant design of the ticket, the $1 million top instant prize, and the added thrill of the second-chance experience in Las Vegas, would collectively make this a very appealing and successful game.”

Kyle Rogers, Executive VP of Lottery Licensing at Scientific Games, said, “We continue to lead the gaming entertainment industry with licensed brands and linked games that generate incredible excitement with players and provide once-in-a-lifetime prizes and unique experiences. With over a decade of experience, Scientific Games understands how to connect players with the lottery brand and with brands like JAMES BOND 007 in relevant and memorable ways.”

Rogers also shared that big games appeal to both new and existing lottery players. In addition, linked games offer participating lotteries powerful prize experiences that most could not provide on their own, as well as unparalleled marketing benefits. Over the last decade, Scientific Games presented more than eight linked game blockbusters, each packaged with quality, creative marketing assets for participating lotteries, with local radio and TV ad campaigns and at retail point-of-sale. Many became among the top-sellers with lottery players.

Scientific Games is the world’s largest provider of lottery instant games, and the industry’s leading creator of linked games. The company currently has more than 100 licensed brands for lottery, digital, social and casino games.